"The Ukrainian army needs NATO for the war against Russia" 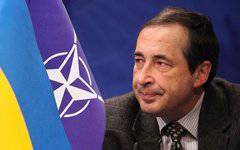 But we must remember that NATO generals did not fight seriously


A well-known publicist, author of the book “Why America Comes On,” Andrei Parshev analyzes the information that NATO has decided to step up cooperation with Ukraine.

Ukrainian army will have to build again

- Now comes a lot of reports that the NATO bloc penetrates into Ukraine and strengthens its positions there. In particular, the alliance declares the importance of creating an efficient army in Ukraine. It is clear that the Ukrainian army needs NATO for the war against Russia. These statements say a lot, but we now turn to the actual content of these words.

NATO exercises in Ukraine occurred before, so there is nothing extraordinary in this. For some time the alliance used the landfill site of Ukraine, but the NATO military did not really use the territory of the Crimea, in particular, due to the sharp protests of the Crimeans. There were cases when the western military picketed and blocked the locals. So, at least this year there is nothing supernatural in the program of the teachings.

NATO proposes to increase the staff of military instructors, advisers and their representatives in Kiev. But with such forces nothing substantial can be done, and I think this is only the strengthening of military intelligence on the territory of Ukraine. To create a modern army, comparable in its capabilities with the Russian, in the near future is impossible.

The army will have to build again, and it's not in stock weapons, which, by the way, is enough in Ukraine now. The problem is in organization, supply and provision. If a tank of thirty years of age can be used in modern warfare, then communications, reconnaissance and target designation equipment must be modern. This applies to armored vehicles, aviation, helicopters and so on.

Large-scale conflict between the Ukrainian and Russian peoples is almost impossible.

But where to get the money for the implementation of such re-equipment? All proposals to strengthen the army of Ukraine come precisely at a time when the economy is on the brink. There are no resources even to pay for the current needs of the state and society. Under these conditions, spending tens of billions of dollars on "defense" is simply fantastic, or rather, fantasy.

NATO generals did not fight seriously. The generation that participated in the Vietnam War is gone. The current officers are accustomed to other types of conflicts, but they also need to understand that for modern war, logistics and economics are much more important than weapons. And there is also a moral moment: the NATO leadership understands that a large-scale conflict between the Ukrainian and Russian peoples is almost impossible.

In Western Ukraine, relevant public opinion polls were made, and it turned out that only 30% of respondents were ready to fight the Russians, even in the event of aggression from Russia. At the same time 30% would like to fight on the side of Russia, and 40% answered that they intend not to participate in this conflict. And if such data were obtained in the West of Ukraine, then what then to say about Eastern?

I do not recall such surveys in the east of Ukraine, but I think for NATO members the sociological statistics will be even more discouraging. Even if the problems of the Ukrainian economy are solved, how seriously does the alliance intend to build up the might of the military machine of Ukraine? How much will NATO be sure that the same military machine will not turn against the alliance?

Ctrl Enter
Noticed oshЫbku Highlight text and press. Ctrl + Enter
We are
A great interview with Sergey Lavrov: about Ukraine, Obama and IranWhat you didn't want to know about England
Military Reviewin Yandex News
Military Reviewin Google News
88 comments
Information
Dear reader, to leave comments on the publication, you must sign in.