Will the Kazakhs move to the north? 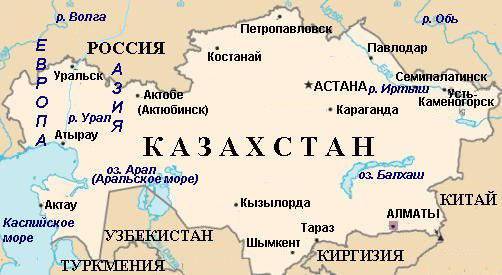 Against the background of the annexation of Crimea to Russia, ideas of mass relocation to the north of the titular population of the country began to be discussed in the public space. However, such a policy is by no means new to Kazakhstan. Moreover, it has already produced quite tangible results, although the Kazakh authorities have so far failed to radically change the ethnic composition of the population of the northern regions.

20 in March, almost immediately after the Crimean referendum and the beginning of the process of legal accession of the peninsula to Russia, the Kazakhstan online publication Matrix.Kz announced plans to resettle in the northern regions of the republic 300 thousand Kazakhs. News It was published with reference to the Kazakh edition of shyn.kz, which, in turn, referred to the Chinese resource tieba.baidu.com. “... In connection with the latest events in Ukraine, Kazakhstan in the three northern regions will strengthen cooperation with China in the agricultural sector,” the report said, “... this large project requires about 200 000 workers. And the total need for people is about 300 000 people. And in this regard, Kazakhstan can use an excess of labor in the south of the country, and China, in turn, can send excess labor from Xinjiang. ”

The scheme of the proposed cooperation of Kazakhstan and China, outlined in this message, is as follows: “1. Kazakhstan gives China the right to lease and use land; 2. A surplus of labor resources from South Kazakhstan is transferred to the north; 3. Excess labor from the northern Xinjiang Altai, Tarbagatai, Ili region, China sends to Kazakhstan; 4. Produced products will be sold on the Kazakhstan market, surplus - in the Chinese; 5. China takes on the financing and provision of equipment. " It has been suggested that the main goal of the project is not in the economic development of the northern regions, which are already the main industrial and grain producing region of Kazakhstan, but in preventing the “Russian reconquest” by mass immigration of people from southern Kazakhstan and eastern regions of the PRC. in the northern regions of Kazakhstan.

The Kazakh authorities have soon denied the existence of such plans. The head of the Ministry of Labor and Social Protection of the Population, Tamara Duysenova, 28 in March, in response to a question from Kazakhstan’s Internet resource Tengrinews.kz, stated that this was not true. “The fact is that there is no such thing,” she noted, “There is a government decree on the resettlement of oralmans in certain regions. If oralmans arrive, then they are provided with more benefits and employment in the northern regions. And the fact that 300 thousands of people relocated - no.

It is noteworthy that the idea of ​​resettlement to the northern regions of the population of the southern regions was discussed as early as October in 2013, when it was far from the events in Ukraine and the Crimea.

She was nominated by Senator Svetlana Dzhalmagambetova, who was concerned not at all about the threat of separatism, but about the introduction of a per capita financing of budgetary institutions that put them in difficult conditions. “I just have the impression that in the north or it’s necessary to close all the villages and say, or let's move people from south to north,” she said, “If there is no school in the village, if there is no settlement in the village, no one’s will not live there. The President moved the capital to have a population here. But everything is around Astana, and then there no one wants to live. ”

It is worth recalling that Kazakhstan started the resettlement of the Kazakhs in the northern regions immediately after the collapse of the USSR. At the time of independence, the majority of the population of its northern and northeastern regions were Russian and other European peoples, which caused the Kazakh authorities hidden concerns about the possible growth of separatist sentiments. According to the all-Union census 1989, Russians constituted the majority of residents of East Kazakhstan, North Kazakhstan, Karaganda, Pavlodar, Tselinograd, Kustanai and Kokchetav, as well as a significant part of the Semipalatinsk and Dzhezkazgan regions, most of whose inhabitants were Kazakhs. In the southern and western regions of Kazakhstan, by contrast, the titular population prevailed. Particularly noticeable was its dominance in the west of the republic, where Kazakhs constituted from 1 / 2 to 2 / 3 inhabitants.

From the point of view of the Kazakh authorities, this situation threatened the territorial integrity of the country. Also at the beginning of the 1990's. The experience of Moldova, which actually lost a large part of its territory as a result of the conflict with Transnistria 1992, was still very fresh.

In order to eliminate ethno-demographic imbalances, the authorities took three groups of measures: they moved the capital from Almaty to Astana, changed the administrative-territorial division of the northern regions, and started moving the Kazakhs from the CIS and foreign countries. The most noticeable, of course, was the transfer of the capital. Its official reasons were the remoteness of Alma-Ata from the geographical center of the republic, poor environmental conditions, increased seismic danger, difficulty of construction work, as well as the need to create a second center of economic growth. In reality, the main reasons were the desire to change the national and ethnic composition of the population in favor of the Kazakhs. In July, 1994, the Supreme Council of Kazakhstan adopted a resolution on the transfer of the capital to the regional center Akmola. In December, 1997, the president, signed a decree that finally fixed the status of the capital to Akmola, six months later renamed Astana, which in Kazakh means “capital”. In the autumn of 1997, the transfer of central authorities to Astana began. As a result, the number of Kazakhs in Astana began to grow rapidly. By 1999, it grew 2,7 times (from 49,8 to 133,6 thousand), while Russians decreased by 14,8% (from 152,1 to 129,5 thousand).

Administrative-territorial reform of the second half of the 1990-ies. was aimed at combining mainly "Russian" areas with "Kazakh". So, the East Kazakhstan region in 1997 was merged with Semipalatinsk, Karaganda - with Dzhezkazgan, Kokchetav region is divided between North Kazakhstan and Akmola, and Turgai - between Akmola and Kostanay regions. In all of these regions, Russians by the end of the 1990s. accounted for less than half of the population, and their dominance within individual areas was not so obvious.

But the main way to eliminate the ethno-territorial imbalance was the resettlement of ethnic Kazakhs from the CIS and foreign countries to the north and north-east regions of the republic.

According to various estimates outside the republic in 1990-s. lived from 4 to 5 million Kazakhs - more than half the number of the titular ethnic group in Kazakhstan itself. The most numerous were the Kazakh diaspora in China (about 1,3 million), Uzbekistan (870 thousand), Russia (660 thousand) and Mongolia (157 thousand). In addition, ethnic Kazakhs lived in Turkmenistan, Kyrgyzstan, Tajikistan, Afghanistan, Turkey, Iran, Pakistan and other countries. The most numerous was the Kazakh diaspora in the PRC, which, apparently, was to become the main demographic base for the resettlement of 300 thousand Kazakhs to the territory of Northern Kazakhstan.

In 1992, Kazakhstan adopted the Law on Immigration, which provided Kazakhs who were resettled in the republic in connection with “persecution, oppression, restrictions on rights and freedoms, well-founded fears of being subjected to it,” as well as “a desire to return to historical homeland ”, refugee status, and those who left the territory of Kazakhstan in the course of mass repressions, persecutions, prisoners of war and their descendants - refugee repatriates. In December 1997, a new law “On Migration of the Population” was adopted, according to which the repatriate (oralman) was considered “an indigenous person expelled from the historical homeland ... due to massive political repression, illegal requisition, forced collectivization, and other inhumane actions voluntarily moving to the Republic of Kazakhstan for the purpose of permanent residence, as well as its descendants. ” By law, immigrants had the right to a wide range of benefits: free cross-border travel, travel to a place of residence, transportation of property, assistance in finding a job, advanced training and learning the state language, getting education, medical assistance, pensions and benefits, allocation of land and long-term loans . In practice, however, far from all of them could be obtained.

From 1991 to 2011, thousands of Kazakh families with a total of about 221,3 thousand returned to the territory of Kazakhstan 860. Most of them came from Uzbekistan (60,5%), China (12%), Mongolia (10,4%), Turkmenistan (8%) and Russia (5,3%). At the same time, the majority of oralmans (Kazakh. “Immigrant”) were located in the northern regions. So, from 12,5 thousands of Kazakh families who immigrated to Kazakhstan throughout 1991-1996, 44,7% were located in Karaganda, Pavlodar, Kokchetav and Semipalatinsk regions. According to the quota for 2003, in the North Kazakhstan, Kostanay, Akmola and Karaganda regions it was planned to settle almost half of the 5 thousands of IDP families.

In April 2012, the repatriation of Oralmans was unexpectedly suspended until a special order of the government and has not yet been resumed.

Adaptation of immigrants who found themselves in unaccustomed economic, socio-cultural, and climatic conditions, occurred with great difficulty. Often this provoked their repeated migration to the southern regions and countries of former residence. At the same time, the “quality” composition of oralmans left much to be desired. If the European population leaving Kazakhstan had a high level of education and professional qualifications, many immigrants did not know how to read and write. A significant part of the emigrants were industrial workers and specialists, and the repatriates often refused to work in the industrial sector. Having experienced difficulties with housing, job search, social and language adaptation, the oralmans became a headache for the authorities. In October, 2011, the head of the state holding Samruk-Kazyna, the son-in-law of President N.A. Nazarbayev, Timur Kulibayev, at a meeting in connection with the strike of oil workers in Mangistau, said that “oralmans from Turkmenistan and Uzbekistan are now moving to Zhanaozen in whole villages. In their countries they were, we will speak, on the sidelines. ” At the same time, “the strikers have their own informal leaders, who together came from Karakalpakstan”. Therefore, measures to restrict migration to Zhanaozen, whose social infrastructure cannot cope with the influx of immigrants, are long overdue. In December, 2011 in Zhanaozen, the largest mass riots occurred with 1986, which escalated into clashes between striking oilmen and police and resulted in the death of 15 people.

Nevertheless, the ethnic composition of the population of the northern regions after the collapse of the USSR has changed markedly. By the beginning of 2010, the Russians exceeded the number of Kazakhs only in the North Kazakhstan region, where they accounted for 48,2% and 33,9% of the population, respectively. In addition, Russians were about 40% of residents of Akmola, East Kazakhstan, Karaganda, Kostanay, Pavlodar regions and almost 1 / 4 of Astana residents. The paradox also lies in the fact that earlier the Kazakh authorities themselves expressed concern about the increasing emigration of the Slavic population that could leave Kazakhstan without qualified specialists. According to some information, N. Nazarbayev personally asked V. Putin to reduce the intensity of the implementation of the program to resettle compatriots in the country. Immigration to the northern regions of the Kazakhs from China or the southern regions of Kazakhstan in an amount comparable to the population of the whole region will lead to a violation of the ethno-demographic balance and may provoke another wave of Russian emigration. In addition, the Chinese Kazakhs, many of whom have a good education and fit well into the realities of life in the PRC, have not shown much desire to move to Kazakhstan.

So the news about the resettlement of 300 by thousands of Kazakhs, most likely, is an information stuff intended to check the public reaction.

But even if these plans remain on paper, over time the Russian question in the north of the republic can be solved by itself. The birth rate of the Kazakhs is higher than that of the Russians, who also continue to emigrate to Russia. Under these conditions, the ethno-demographic balance in the northern regions will gradually change in favor of the Kazakhs, and the Russians, as has already happened throughout Kazakhstan, will become an ethnic minority.