East "okhlos". On the "strategy" of scientific elites of Ukrainian origin

It is time, rejecting false shame and varenic patriotism, to recognize that in its present form, Ukraine, as an independent state, did not materialize, is doomed and has no prospects. Eastern Ukraine is a very heavy ballast for the state, which will drown the whole country. The idea of ​​catholicity today, alas, does not work. If we do not preserve Ukraine as part of the regions where the Ukrainian people live, and not okhlos, who does not remember either their kinship, or their language, or their stories - we lose everything.

The eastern regions should be temporarily withdrawn from its (Ukraine - approx. Author) composition. Having got rid of the ballast, Western Ukraine will get every opportunity to build a democratic European state and to join the EU and NATO as soon as possible. After this, it will only be necessary to wait for the historical conditions to ripen so that a powerful and successful Ukraine will be able to pick up its former territories, as well as the territories where Ukrainians live compactly.
It will happen much faster than many people think. Europe began to actively get rid of energy dependence, which means that the end of Russia in its current form and, accordingly, its influence is inevitable. The territory of the Russian Federation will begin to quickly fall apart into specific princedoms, and Ukraine will simply be forced to take the protection of Ukrainians living outside its borders.

The day is today. Quote from a post in one of the Ukrainian nationalist media (translation):

To clear the entire south-east of Ukraine from the traitors and wake up the local people, Putin needs to surrender him. I think half a year is enough. More Russia will not survive.

So it turns out that we, dear Russians and not only Russians, have too overestimated our capabilities and opportunities to defend our interests of Russian and Russian-speaking residents of Ukraine ... In fact, Ukraine’s loss of Crimea and its historical reunion with Russia, tectonic shifts in political the life of the East of Ukraine is not at all the willpower of the inhabitants of the Crimean peninsula and the Donbass. And it is not even a failure of the policy of the current haves, as it seems to them, the power in Kiev. All wrong! It turns out that this is a “big strategic plan”, which several years ago, some learned scholars of Ukrainian origin began to nurture in their minds. The strategy is simply monumental: forgive generously, overdue ... a part of the territory of the country Kiev needs here and now so that later ("faster than many people think") Ukraine became stronger, more successful and independent ... From the series: something got sore cut off some things, maybe then two will immediately grow in its place - you will be stronger with three hands ... The strategy is simply phenomenal, and, as you can see, already with many years of "endurance", "fermentation" ...

But it’s not for the first time that one comes across surprising judgments of some well-known representatives of the Ukrainian public who (judgments) relate to the “ideological inferiority” of the east of Ukraine before its west. “Ballast”, “okhlos”, “local folk” and other terms of this kind are all about Kharkov, Donetsk, Lugansk - regions that provide Ukraine with their work, pulling it out on their backs. But the work “for that zapadenskogo guy”, you see, causes anger among the representatives of the “progressive Ukrainian”. The East must not only feed the West, but also unquestioningly stand up to protect its interests: clap hands at the sight of Bandera portraits, warmly support NATO membership to die somewhere in the jungles of Central Africa or in the sands of the Middle East at the call of the commanders from Paris , Washington, London, speak exclusively in Ukrainian, so as not to cause anger in "Tsybulenko" companions. Although the “little girls” themselves often ignore the “common language” in publications as well, for, apparently, they can’t accumulate a really solid vocabulary for a real “Ukrainian nationalist” ...

So, among the representatives of the “color” of Ukrainian thought, living in the EU (and the same Tsybulenko lives in Estonia, which especially distinguishes the Ukrainian patriot in it ...) the opinion that the east of Ukraine prevents “the whole” Ukraine from developing normally, not uncommon. Only here there are questions: "all of Ukraine" - is that even where? - if from Lviv to Ternopil, then already Polish neighbors may have questions. Warsaw, too, can offer to “temporarily hold” the same Lviv, which “all of Ukraine” received at its disposal only in 1944 year - well, it would wait until Ukraine, as Professor Tsybulenko broadcasts, grow stronger.

If “all Ukraine” is also the Transcarpathian region, then Hungary can take it “for a while” to itself Hungary due to historical nuances. And then suddenly, Uzhgorod will be for the Ukrainian authorities and radical nationalists a ballast with their “okhlos” or “local people” that prevent them from developing in the right direction.

Of course, this is a monumental strategy! You give Tsybulenko to the Ukrainian presidents, and his associates - to the new Ukrainian government! True, their placement may cause obvious problems. Indeed, as long as conditions in Ukraine “mature” so that it becomes “successful and powerful”, then the only Ukrainian territory in the near future can probably be considered, perhaps, the buildings and front gardens of embassies Square in foreign countries, and then this property will not be taken away for debts ... Everything else “for a while” will disperse on its own, so as not to interfere with the flourishing and power generation of “all Ukraine”. 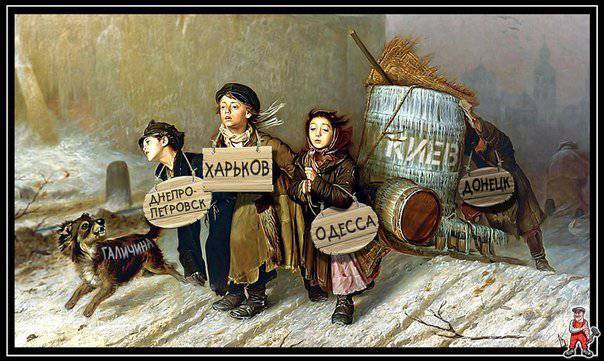 About exactly where "Ukrainian ballast" lies "

With such proposals of the Ukrainian scientific elite, no action is needed even for friends, even for the enemies of Ukraine in general, it’s not necessary to do it - the neighboring country regularly performs the course, entered in the form of a special code. Moreover, the code is also interesting: the self-proclaimed authorities of Ukraine, with foaming at the mouth, prove that the country should remain united, that there are only separatists around, but at the same time these “authorities” are doing everything to make the split full-scale.

In practice, this is a banal unprofessionalism, bordering on stupidity, threatening not only the integrity of Ukraine as a state, but also the very fact of its existence in the future. Epithets in the form of "ballast" and "okhlos" for hard workers from the east of the country are not even a provocation, this is already a clinical situation, all the consequences of which are visible today. Kharkov, Donetsk, Lugansk.

And here is an example of how the eastern “Ohlos” escorts the “might of Ukraine” back home:

Ctrl Enter
Noticed oshЫbku Highlight text and press. Ctrl + Enter
We are
The language situation in Ukraine. Linguistic discrimination as a tool of nationalist politicsResults of the week. "Professor, his tail fell off!"
Military Reviewin Yandex News
Military Reviewin Google News
41 comment
Information
Dear reader, to leave comments on the publication, you must sign in.