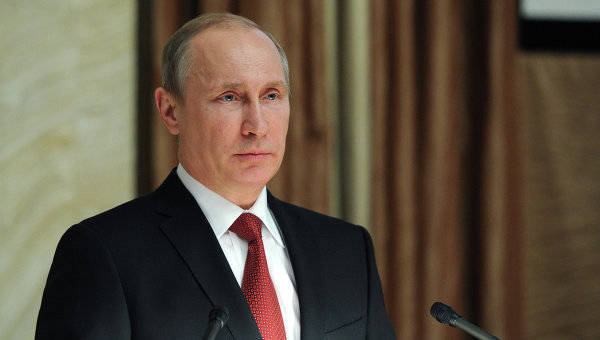 Last year, the Federal Security Service of the Russian Federation was active in suppressing espionage activities against Russia by representatives of other countries, and there were dozens of revelations on account of the special services. This was announced by Russian President Vladimir Putin, speaking on Monday at a closed board of the FSB. The head of state called the fight against terrorism and extremism a key area of ​​activity for the FSB and outlined trends in work in this area.


In turn, the director of the FSB Alexander Bortnikov, noting that the operational situation in the world is getting worse, stressed that in 2013, the work of the FSB "was aimed at preventing terrorist threats and intelligence activities of foreign special services, fighting organized crime, ensuring information security, and inviolability of state borders ", ITAR-TASS reports. The FSB acted in strict accordance with the Constitution, the national security strategy, the instructions and instructions of the president, he stressed.

Putin at the meeting said the statistics. In the 2013 year in Russia, thanks to the efforts of the security agencies, the activities of 46 personnel officers of the special services of foreign countries and 258 agents were stopped, he said. The President noted that "traditionally the most important direction of the work of the FSB is counterintelligence activities, this is indeed a very serious combat sector."

In his speech, the head of state demanded that the FSB strengthen the security of "national information resources, communication lines, and databases of state authorities containing state secrets." “As we know, the whole world knows that in the modern world there are enough people willing to eavesdrop on other people's secrets,” Putin said.

Recall that the Russian president made such a statement against the background of the non-abating scandal with wiretapping by the US National Security Agency not only of the citizens of their country, but also of representatives of the leadership of other states. Recently, the media reported that the NSA has the technical ability to record virtually all telephone conversations in a particular country. It was noted that the Mystic telephone interception system has been in operation since 2009 of the year, and it has become possible to use all of its tools since 2011. In which country the United States over the years conducted espionage activities of this kind, it was not specified.

Speaking at the board of the FSB, the president touched on another pressing issue - about citizens of the CIS countries and the Russian Federation recruited by terrorists. “A serious concern is caused by the fact that some citizens of Russia and the CIS countries, recruited by terrorists and radicals, are now taking part in hostilities in Afghanistan, Syria and other regions of the world, in fact, are undergoing terrorist training and ideological treatment there,” said Vladimir Putin

According to the head of state, "there is every reason to believe that then they can be thrown against both Russia and our neighbors in the Commonwealth." As Putin noted, law enforcement agencies and special services "should be ready for this, have the entire arsenal of preventive measures."

According to Putin, the key focus of the FSB remains the fight against terrorism and extremism, according to Interfax. As the President stressed, the situation remains difficult. "The terrorist underground, despite serious losses, still retains the ability to commit terrorist acts against civilians," the head of state said.

In connection with what was said, Vladimir Putin recalled the terrorist attacks that took place at the end of last year in Volgograd. The terrorist attack at the railway station of the city occurred on December 29. The explosion killed 18 people and a few dozen others were injured. The next day, December 30, another explosion thundered in the city that killed 16 people.

The authorities are worried about the fact that extremist radical groups are trying to intensify their activities not only in the North Caucasus, but also to transfer it to other regions of our country - to the Volga region, Central Russia. Malefactors are striving to provoke interethnic and inter-religious conflicts, Putin noted.

Ctrl Enter
Noticed oshЫbku Highlight text and press. Ctrl + Enter
We are
The action “Military service under the contract is your choice!” In Rostov-on-Don: future contract servicemen, exhibitions and “Russian Knights”
Military Reviewin Yandex News
Military Reviewin Google News
145 comments
Information
Dear reader, to leave comments on the publication, you must sign in.