Crimean veterans did not break German gas and Ukrainian oblivion 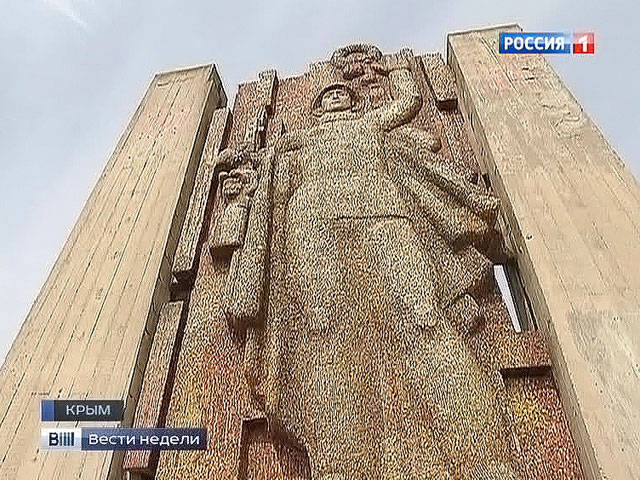 April 1 marks 70 years since the start of the Crimean offensive operation, where our troops finally knocked out the Nazis from the Crimea during World War II. But it was very difficult: the enemy - under 200 thousand, hundreds tanks, aviation and thousands of artillery pieces. During the years of occupation, the enemy settled there firmly. There were only a few participants in the terrible years of the defense of Crimea. How did they survive this hell and at what cost did they win?


Eyes do not tolerate a harsh light now. 170 days of the darkness they remembered for seven decades. Adzhimushkay quarries - Brest Fortress of Crimea. In May, 1942 threw 15 thousands of fighters and residents of Kerch here. Daylight saw 48 people. Now he alone remember how it was.

“You will go to the hospital, and there the wounded moan:“ Sister, give me something, I want to live. ”She will come to him, and she herself will have nothing - she will hug,” says Ajie-Mushkaya’s defense participant Mikhail Radchenko.

An underground hospital among the rubble quarries was found years later when search teams proved that Aji-Mushkaya’s defense was, that the garrison was fighting among the ancient adits, and was killed by bullets, shells and starvation. He held, distracting the forces of the enemy, letting the retreating parts cross the strait.

I waited for an order to leave, but did not receive and sent the last message to the sky: "Everyone! We, the defenders of the Crimea, are suffocating from gas, die, but do not surrender to prison!"

The gas was released when shells and air bombs failed to knock out the quarries, and the underground garrison counterattacks became too frequent. The first "gas strike" took several thousand lives at once, and then every day a poisonous cloud spread through stone gaps through the gaps in the rock.

“The Germans started in 10 in the morning and pumped gas until the evening. We immediately went to the ground and breathed with moisture and damp,” recalls Mikhail Radchenko.

The gas concentration was so dense that this terrible “gas attack” was not mentioned on the Nuremberg process.

Neither the Adzhimushkai garrison, nor its heroic defense existed for the command of the Red Army. They were forgotten because Sevastopol had already fallen. And they, non-existent, fought there, where even it was simply impossible to live, moving in the dark along stretched wires, dying in forays for water or sucking it out of wet walls with their lips.

A cave covered with toys is a children's grave. Together with the soldiers, all who came down here, not knowing that they would never see the daylight again, would not know, just like they did, bringing victory to the legendary isthmus rugged by trenches and ramparts since 20's.

The land of Perekop shaft still stores fox holes. One of them is the participant of the defense of Perekop Peter Oleynik. Five months knee-deep in the snow, now in the water, keeping the fortifications before the order to come. His position on the map, he drew.

“The Germans had a piece. They saw all our positions,” recalls Oleinik.

On his jacket - four medals "For courage." They were never handed simply "for participation" - only for personal courage in battle. He received the first one right after the storming of the fortifications of Perekop.

Many had no harder fights, otherwise they would not have asked to return them to these ramparts, so that, like Ivan Bondar, who was already dead near Sevastopol, lay where the craters could neither cover the time nor the grass.

None of them wear all the medals - they won't fit. And Ekaterina Selishcheva, a participant in the battles for the liberation of the Crimea, is sure not to forget the 18 kilometers of the rotten sea of ​​the Sivash that they ford. We went to Perekop, to those foxholes. Later, the wagons stretched the tape along a narrow mine, where the meter to the side - and death.

Sivash. The wind drives here the tumbleweed day and night. Natural redoubt any defense of the Crimea. Its dense salty water keeps the bodies of the dead still in Civil. In April, the 1944s storming to storm the coast did not reach the battalions. This sea and the projectile is not needed to kill.

Every April, a small cemetery near Perekop grows with a new grave - the shaft still gives away the remains of those who died for it. And so here - every line of defense.

Under the vaults of the quarries, Mikhail Radchenko is harder to come by, although the house where he was born and lives is five hundred meters.

Their medals and photos are an eternal memory. Veterans remember that a year ago they did not allow the ashes of the defenders of height to be buried, as the President of Ukraine did not lay flowers at the monument to those killed for Kerch. Surely, and so now another day is embedded in their memory.

“When I heard the beacon calls, I took the receiver, kissed him and wept: at last Russia,” admitted Radchenko.