Europe turned sharply to the right 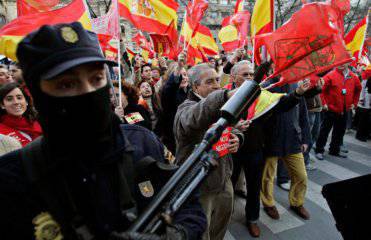 In May, the 2014 of the year in Spain will hold elections to the European Parliament, the results of which are important for the military-political leadership of the country, as they will show how the Spaniards today support the political course of the ruling People’s Party and its leader, Prime Minister M. Rahoy. In addition, Spanish political analysts note that the May elections could have a significant impact on the alignment of political forces before the elections to the national parliament in 2015.


However, now Western experts are confident that it will not be easy for the People’s Party to fight ultra-right political organizations that are gaining influence. Although they note that, perhaps, right-wing parties are populist, however, their tough stance towards the current government is quickly gaining popularity among the Spanish population. Thus, according to a survey conducted by the Pew Research Center, if in the 2012 year, the political course of the ruling People’s Party was rated positively by 45 percent. Spaniards, then in 2013, this figure dropped to 27 percent.

Currently, political analysts argue that the rising popularity of ultra-right parties in Spain is primarily caused by the global financial crisis that erupted in 2008, which showed how Spanish economy was unprotected against global economic shocks, and the government’s previous financial policy is untenable.

Economists are confident that, despite the sixth year that Spain has been struggling with the economic recession, it can hardly be expected to get out of it on the background of ongoing austerity programs and a difficult situation in the labor market, where unemployment remains the highest in Europe and has reached level in 26,03 percent. In addition, financial analysts doubt Spain’s ability to repay debts that have reached 94 percent. from GDP, or 961,555 billion euros.

The situation is aggravated by the European Union itself, which is keeping Madrid under constant pressure, urging the government of M. Rahoy to take more active measures to reduce the budget deficit. The austerity measures carried out by the People’s Party have already affected the moral and psychological state of the population of Spain, which is constantly manifested in numerous protests throughout the country.

Experts point out the problem of migration as another major source of growth of ultra-right sentiment among Spanish residents. United Europe brought with it not only temporary benefits, but also numerous labor migrants. It is precisely on this issue that the government of M. Rahoy is constantly criticized by opposition parties, who believe that the policy of multiculturalism has failed. Spanish Foreign Minister H. F. Diaz said that at present around 70 percent. Spaniards in favor of tightening immigration laws. He also stressed that in the near future Spain will need financial assistance from the EU in the amount of 45 million euros to improve the security systems of its borders, since the border service in its current state cannot cope with the increased flow of illegal refugees who are trying to get to Europe through Spain .

It is worth noting that large Spanish corporations, especially in times of crisis, are in favor of a more active use of migrant labor, thereby increasing the margin of their profits. However, migrants occupy jobs that the native Spaniards could take, so the government of M. Rahoy has to balance on two chairs: on one of them are donations from corporations on the livelihoods of the People’s Party, on the other - votes.

In addition to the growing popularity of ultra-right ideas in society, Spain is currently facing a significant rise in separatist sentiment. Back in the 2012 year, when the central government of Spain obliged the 17 administrations of the autonomous regions to take anti-crisis austerity measures, supporters of the sovereignty of Catalonia, a province in the north-east of the country, became more active. In its capital, Barcelona, ​​there was a manifestation for independence from Spain with the participation of about 1,5 million. After that, online voting was held in the region, which resulted in more than 80 percent. residents of the region favored holding a referendum on secession from Spain. Soon, the head of the Catalan government, A. Mas, announced that the independence referendum would be held on November 9, 2014.

Supporters of the department are encouraged by the fact that, feeling the support of a significant number of citizens of the region, they believe that the Spanish government will be deprived of the opportunity for the European Union to take repressive measures and, having no leverage, will have to accept the will of the Catalans. The government of Catalonia regards the European Union in this context as an ally and a tool to influence the central government of Spain.

Supporters of independence of Catalonia cite language and cultural differences between the autonomous region and the rest of the country, as well as a more favorable economic situation in the region, as arguments for secession, although this is disputed by many Western economists.

It is worth noting that in the case of separation from Spain, the Catalan government wants to keep membership in the European Union, NATO and the euro as a national currency, since it believes that such EU trusteeship will only benefit the region. However, such desires cause skepticism among a number of Western experts, who are confident that in the event of secession, Catalonia will have to leave the EU without the right to re-enter in the short term, and will also be deprived of the right to remain part of the single market, enter the Schengen zone and use the euro.

In turn, most Spaniards believe that separatists should be given legal resistance, without resorting to military force. The official authorities hold the same position. Prime Minister M. Rahoy said that the government would not allow a single referendum, the results of which would call into question the territorial integrity and sovereignty of Spain, and the constitutional court had already announced a referendum on the independence of Catalonia contrary to the country's constitution.

In conclusion, it is worth noting that the popularity of ultra-right and radical parties has been noted not only in Spain, but throughout the European Union. Some European politicians said on this occasion that “in May we can get the most“ anti-European ”parliament in stories The EU, and this is just the beginning. ”

Ctrl Enter
Noticed oshЫbku Highlight text and press. Ctrl + Enter
We are
What you didn't want to know about EnglandEvaluation of state and political figures: survey results
Military Reviewin Yandex News
Military Reviewin Google News
36 comments
Information
Dear reader, to leave comments on the publication, you must sign in.