April 7 2014
256
Events in Donetsk and other cities of Ukraine are served in the Russian media as the assertion of the rights of citizens "with the tricolor in their hands" and the unity of the local police with the people. In the Ukrainian editions they write about "separatism", "pro-Russian activists" and Putin's long arm. The so-called Minister of Internal Affairs of Ukraine, A. Avakov, wrote on Facebook: “The Russians are swinging the situation in the country. Putin and Yanukovych ordered and paid for the next round of separatist riots in the east of the country — Lugansk, Donetsk, Kharkov ... 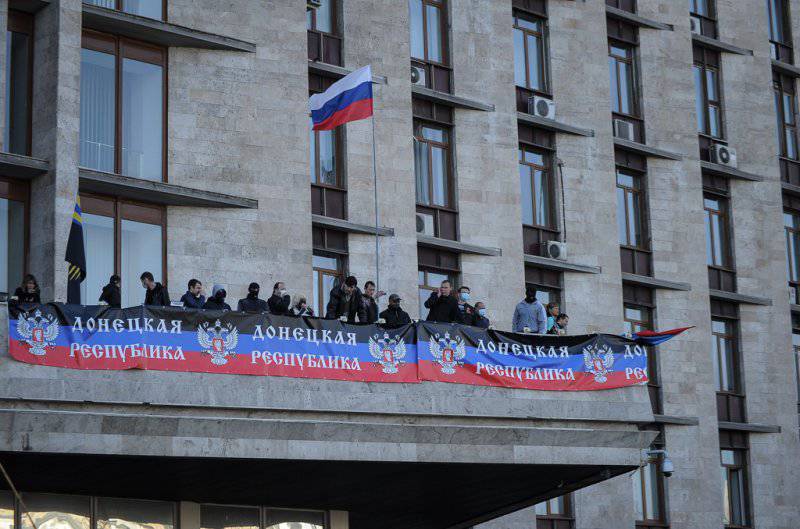 Events unfolded as follows. On Sunday, residents of Donetsk - for the umpteenth time - demanded a referendum on the status of the region. More precisely, about independence. Citizens gathered for a protest on Lenin Square. Protesters prepared for the action thoroughly: in the center of the city appeared the tents of the Russian Bloc Party and the Communist Party of Ukraine. There is no exact data about the number of protesters. They write in the press about two thousand and even ten thousand. UNIAN called the number of "about 2 thousands" ("separatists", of course). But, I think, there were much more speakers. Indeed, because of this mass protest and. about. President Mr. Turchinov did not even fly to fraternal Lithuania.

The entire demonstration of the demonstrators headed from the square along Artyom Street to the regional administration building, surrounded by a double cordon of policemen. There were reports that part of the protesters (about two hundred people) were blocked by police in the building. The version from UNIAN looks like this:

“After the rally on Lenin Square, protesters on Artem Street moved to the building of the Donetsk Regional State Administration. They attacked the militiamen guarding the building and pulled out several shields from them. Separatists are trying to storm. The separatist group managed to break into the building. Another group of separatists broke into the courtyard of the building.

Pro-Russian separatists who stormed the building of the Donetsk Regional State Administration / Regional Council installed flags of Russia and the forbidden Donetsk Republic on the visor of the building. ” 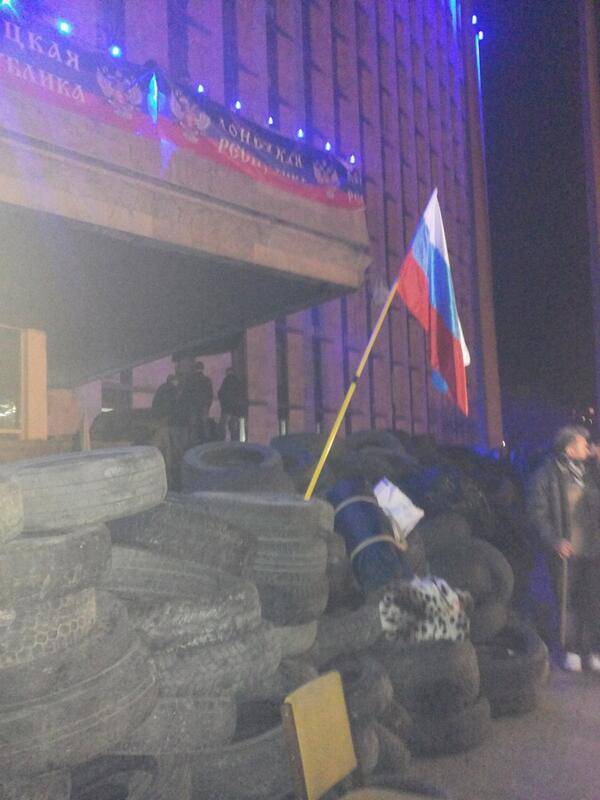 Here the enemy is clear: these are pro-Russian minded attack aircraft, throwing grenades. The goal of the “separatists” is to convene an extraordinary session of the Donetsk Regional Council and make a decision on holding a referendum on joining Russia.

In the Russian media they write that if the demand for the withdrawal of the Donetsk region from Ukraine and the transition to federalization is not met, the protesters will announce the dissolution of the regional council and elect new deputies. The formation of the People’s Regional Council in Donetsk can begin at 12 in the hours of the day local time.

This is how Sergey Arsenichev tells about the assault of the Donetsk regional administration ("News of the Week"):

“Bottles are flying into the glass doors. In the course of the struggle, the attackers take iron shield from the policemen. Armed with them, the crowd goes around and attacks the iron gates.

Under the onslaught of the protesters, it becomes obvious that, despite the order, the police are with the people. The gates open.

On the third attempt, the protesters broke into the territory of the regional administration and are now trying to get inside the building. The glass is broken, but iron is hidden behind plastic doors. At this time, a message arrives that the central entrance is also free. People pushed the police and stood a living corridor at the door of the administration. Passions subsided a bit. And he rose again when the flag of Ukraine was lowered from the flagpole, and a tricolor was raised in its place. ”

Regional site 62.ua published the appeal of the current Minister of Internal Affairs of Ukraine Arsen Avakov in Facebook:

“Russians are swinging the situation in the country. Putin and Yanukovych ordered and paid for another round of separatist unrest in the east of the country - Lugansk, Donetsk, Kharkov.

People gathered a little, but aggressiveness rolls over. In Donetsk, a lot of children and women were brought into the crowd storming the building. They provoke a transition of conflict into the blood and the victims. ”

According to Avakov, the answer to “separatists”, as well as “hot heads” (that is, those “who demand ANY COST to end the unrest”) will be bloodless. Militiamen already received the corresponding command.

And here's another Avakov wrote:

“With a simple human language, I will say to all who sincerely experience - everything that is needed and possible is done. Stop scolding and tantrums. They want it. I tell you, we’ll stand it, everything will be put in order. Support, stabilize - do not rock the boat even more. These are the last convulsions of the gang. ”

In his message, Avakov does not use any journalistic or literary-artistic style:

"We will take the reel of paid marginals and we will irreversibly re-open."

Events in Donetsk - is not all that shocked to Ukraine on Sunday. Rallies were also held in other eastern cities.

Residents of Lugansk called for the resignation of the “authorities” in Kiev, as well as for the release of the people's governor of the Luhansk region, Alexander Kharitonov. Protesters control the building of the Security Service of Ukraine: a tricolor hangs above the entrance. In the churches of the city bells are beaten.

The Ukrainian press writes that the local “separatists” totaling three thousand people seized a branch of the National Bank of Ukraine. These people are unn calls "Well prepared thugs." The agency writes that "captures of other strategic objects are being prepared."


"... the streets of Lugansk are barricaded, to the separatists constantly bring up commodity containers of unknown content."

In Kharkov, citizens with Russian flags gathered near the monument to Lenin. Their main slogan: "Russia! Ukraine! Belarus! One people! One история! One future! ”

Chronology of events in the city tracked site "City Watch". It is reported that the administration building there began to storm at nine o'clock in the evening - the cries of "Russia." Police did not resist; policemen greeted with friendly shouts: "Well done," At eleven o'clock in the evening, after the police had left the administration building, activists said that in Donetsk Yanukovych has landed. The main requirement of the "separatists", the website notes, is the holding of a referendum on the federalization of the region.

Kharkiv events are not alarmed by Mr. Klitschko. Writes "Correspondent.net", the leader of "UDAR" said: "The authorities should immediately intervene in the situation in the east and not let the country split and disrupt the elections. Top Interior Ministry forces and security services must work in the Donbass in the prevention and the prevention of separatist provocations. " Klitschko is convinced that "the riots are not satisfied with the ordinary people, and thugs, incited by a handful of visiting armed provocateurs". He advised the authorities to apply adequate measures: "And the organizers of the provocations should have adequate and harsh reaction of the authorities to such actions."

“Three days ago in my article I predicted a seizure of an ode in the eastern regions. If saboteurs hold out there for 48 hours, the Russian army will invade. This is exactly the same scenario in Crimea first meeting and if it does not work then capture and Russian invasion ie the first plan of Surkov and then activated Patrushev. This is all so primitive simply that the Ukrainian authorities can calculate everything in advance. Now the main thing is complete mobilization to protect the eastern borders of Ukraine. We should also especially beware of the possibility of direct disobedience on the part of some local commanders of the Ukrainian Armed Forces since the GRU was especially prepared in this direction. ”

(The administration of "VO" asks readers not to send messages about grammatical errors in this quotation: it is published without editing.)

As for the Ukrainian government, it has already voiced the planned measures. More precisely, she described her own peacefulness.

Last night, the Ukrainian Interior Ministry issued a statement, which states: "... in Kharkov, Donetsk, Lugansk shares held separatist-minded activists, who were accompanied by attempts to seize government offices. Our position remains unchanged - according to the Constitution every citizen has the right to assemble peacefully without weapons to discuss current issues and concerns. But mass actions, accompanied by violence, seizure of buildings, property damage - is the Law "Interior Ministry even recalled about the Criminal Code and threatened to five-eight years of his release" instigators. " 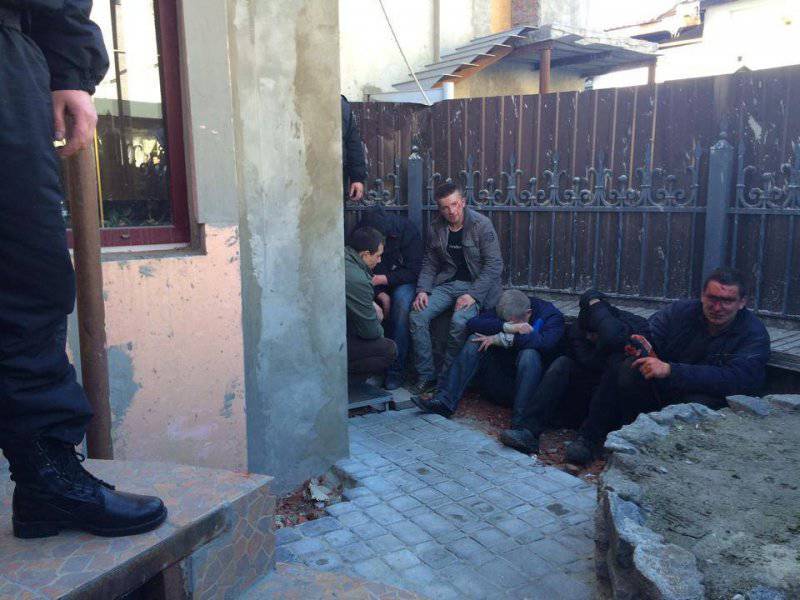 Well, the amazing thing! .. "euromaidan" that all the above ( "violence, seizure of buildings, property damage") was accompanied and where even police officers were killed, was "heroic" and "popular" ( "Glory to the heroes"), and the relatively peaceful protests Donetsk and other cities declared "outside the law" (even with a capital letter). It is clear that the new government in Kiev considers lawful only that which had set her, her beloved, in the chairs of different “and. about.". Everything else, runs counter to the will of the people (or more precisely, self-proclaimed Kievan rulers, and more precisely - overseas will), in strict accordance with the western double standards is called "separatism", "seizure", "storm", "corruption", and protesters are to the vile category of "paid fringe" or "visiting armed provocateurs." The Kremlin is paying these “saboteurs”, of course, apparently through Surkov’s quiet mediation. Well, the "customer" of unrest - Putin himself, who assents to Yanukovych. This is exactly what some “inevitable squeezers” think. Ukrainian pro-US press remains only to write that "commodity container of unknown content" Russian "thugs" drove up in Lugansk secret weapon. Chemical borrowed from Assad ...

Observed and commented on Oleg Chuvakin
- especially for topwar.ru
In Kharkov, beat the "Right Sector"

Appeal of the United Southeast Headquarters