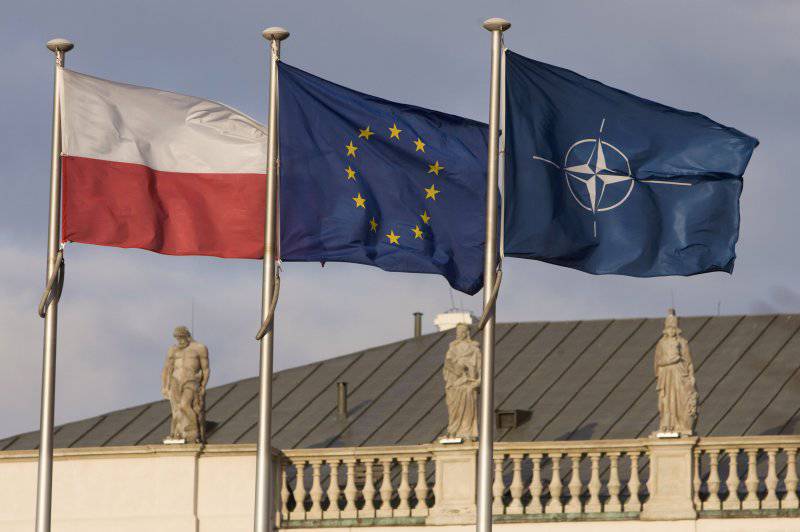 The NATO military alliance expressed its full support to Ukraine in the “Crimean issue” and announced that it was ready for “adequate action” against Russia if the diplomatic conflict was not resolved and developed into a full-fledged armed confrontation. In fact, the alliance openly threatens Russia - just as it once threatened Yugoslavia and many other states that suffered from US-European aggression. At the same time, NATO declares its commitment to the principles of freedom, peace and democracy. But how long can you pursue an aggressive policy, hiding behind certain "universal values"? Will the end of Euro-Atlantic cynicism come?

From defense to aggression

Initially, the NATO bloc was created as a defense alliance directed against the Soviet Union. After the end of World War II, in the West, without exaggeration, they were afraid that the Soviet Tanks can reach right up to Lisbon. Until 1991, fear was the main reason for maintaining and expanding the alliance.

In the 90s, socialism in Eastern European countries was overthrown, and the USSR collapsed. But, despite the disappearance of the external threat, the NATO bloc continued to exist and, moreover, began to expand again, invading the post-Soviet space and approaching the state borders of Russia.

After the collapse of the Soviet Union, the North Atlantic Alliance also committed its first act of aggression by launching hostilities on the territory of Yugoslavia. Thus, the block from the protection tool turned into weapon for an offensive on the world political arena, for the subordination of peoples and the seizure of new territories.

It turns out that even after the end of the Cold War, the confrontation between the eastern and western worlds never stopped. The cold war did not end with the collapse of the USSR — it passed into a less intense stage. Of course, “hot” wars flared up periodically, as, for example, it was in Georgia or is now happening in Syria, however, local conflicts have never before become a pretext for renewing global confrontation.

So it was before the coup in Kiev, which became an extraordinary event and marked the beginning of the second cold war - no less ambitious than the first. Biting on the sovereignty of Ukraine, the United States committed an unthinkable act, trampling all the principles of international law. With its European allies at its disposal, the White House believes that nothing prevents it from establishing American hegemony throughout the world by making a “political blitzkrieg” in the post-Soviet space and disabling Russia with just a few tricks.

But the United States is seriously mistaken if they seriously think that it is too tough for them to take a tiger leap, ending a new cold war in just a few months. Only at first glance, the NATO bloc seems to be a monolithic structure; in fact, the alliance is as weak as ever.

The interests of countries that are members of the North Atlantic Alliance do not always coincide. This was the case even during the Cold War, when France refused to participate in the military bloc. And recently, when the United States unleashed aggression against Russia, many states have completely lost touch points with the White House and with other allies in the alliance.

A similar situation was observed in 2011 during the armed conflict in Libya, when some NATO members spoke out categorically against intervention in the Jamahiriya, while others confined themselves to only symbolic support in words. The most pacifist position was taken by Germany, which flatly refused to take part in the Middle Eastern adventure of Barack Obama and Nicolas Sarkozy.

When the confrontation with Russia began, Germany took exactly the same position and stated that the national interests for Berlin are above all. German companies are too closely connected with the Russian economy, and any sanctions against Russia will return as a boomerang. Even worse, if hostilities begin: NATO bombs and missiles will fall on factories built by German investors! Anti-Russian sanctions, much less war, will become suicide for German entrepreneurs.

France, unlike the Libyan crisis, this time also opposes confrontation with Russia. For the same reason as Berlin, Paris does not want to take any action that could harm bilateral relations. French voters support the government’s foreign policy toward Moscow: the inhabitants of the Fifth Republic are wondering why their country should interfere in the affairs of sovereign states located thousands of kilometers from France.

A similar view is shared by many other members of the alliance, for example, Italy and Hungary. The latter, by the way, recently received a loan in Russia for the construction of two power units of the Paks NPP.

However, there is also a “war party” in NATO - the United States, together with its Eastern European allies. Poland is most eager to fight against Russia. It is followed by Latvia, Lithuania and Estonia - countries where Russophobia is built almost to the rank of state ideology. Romania, which is not interested in strengthening Russia on the Black Sea, and also stands for the elimination of Transnistria, can join the “war party”.

NATO neophytes, accepted into the alliance in 2004, constitute a counterweight to the “old” members of the organization, who are accustomed to make informed decisions and do not want open confrontation with Russia. Perhaps the United States deliberately went to the expansion of NATO in order to increase its influence in the alliance at the expense of its new Eastern European allies - more militant than Western European.

But against whom is the renewed alliance aimed? The United States has no enemies in Eastern Europe. The Soviet Union ceased to exist more than twenty years ago, and modern Russia is friendly toward the West and wants to further develop partnerships with Europe and North America.

In this case, why was it necessary to include Poland and the Baltic states with their clearly Russophobic rhetoric in NATO?

It is obvious that the alliance has moved from a defensive strategy to an offensive one. And it happened not at all last year, when another Maidan gathered in the center of Kiev, but also in the distant 2004. Then, for the first time at the international level, the question was raised about the entry of "post-revolutionary" Ukraine and Georgia into NATO, following Slovakia, Slovenia, Bulgaria, Romania, Lithuania, Latvia and Estonia. At the same time, the alliance planned to grab Moldova and Azerbaijan - if you're lucky, of course, since these countries have territories with a controversial status.

And already in 2006, experts from the US military visited Poland, the Czech Republic and Hungary in order to select locations for anti-ballistic missile systems that were allegedly directed against Iran. But what is the point of the Iranian Republic to strike at Eastern and Northern Europe? Accidentally or deliberately, but elements of the American missile defense system are arranged in such a way that they allow to intercept missiles launched from Russian territory.

This means that America is trying to destroy nuclear parity. Its goal is to make Russia unable to launch a nuclear strike in the event of a major conflict. By destroying one of the Russian trump cards, the United States will become the world's strongest nuclear power, with virtually no competitors: nuclear China does not count because of the imperfection of its launch vehicles and interception of ballistic missiles.

However, thanks to the diplomatic efforts of Russia, the urgent Drang nach Osten was averted. The Orange Revolution gradually faded away and was forgotten, Mikhail Saakashvili unleashed a meaningless war and discredited himself, and the expected expansion of NATO in 2008 did not take place.

But after 10 years, the West is again trying to establish itself in Eastern Europe, and it acts bolder and bolder in spite of Russia's increased military power. Again in Ukraine, a coup, again she is offered to become a member of the North Atlantic alliance - and immediately, without further ado and with minimal formalities. Lithuania, Latvia, Estonia and Poland make very aggressive statements, the United States promises to strengthen its military presence in Eastern Europe.

NATO aggression is obvious. So far in a veiled form: Maidan in Kiev is supposedly independent of its Western sponsors. However, if Russia tries to defend itself, tries to meet the Russians in Ukraine, the confrontation may become open, and then, in addition to Obama’s fervent speeches, tanks and airplanes will go into action, as has happened repeatedly in Yugoslavia, Iraq, Afghanistan, Somalia and Libya.