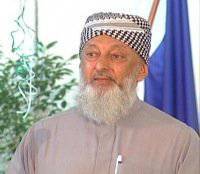 
I greet you, my Crimean Tatar brothers and sisters, at one of the most critical moments of your sad and painful storiesto offer you my good advice based on the precepts of the Holy Quran.

If you are looking for guidance in other sources besides the Holy Quran, and if you answer the difficult situation in Crimea with actions not resolved by Almighty Allah, then you have to pay a high price for such a mistake. In this case, you should not count on the support of your brothers and sisters in Islam in different parts of the world.

Those who criticize Russian Crimeans for their moral and legitimate choice of returning to Russia show dishonesty towards the strange act of the Soviet Union to donate the territory of Crimea to Ukraine in 1954 (through 6 years after the establishment of the state of Israel) without the consent of the people living in Crimea and in Russia. In fact, Israeli Zionists with the hands of the Bolsheviks struck Russia in the back. And this is not the first time they have acted in such a treacherous, anti-Russian way.

The Prime Minister and the Government of Turkey voluntarily neglected the order of Allah not to take as friends and allies (and therefore seek financial and military assistance) such Jews and Christians who are friends and allies to each other (Quran, Sura Trapeza, 51). Throughout history, such a Judeo-Christian alliance did not take place until Western Christians (including the Roman Catholic Church) and European Jews strangely united in a Zionist movement.

It was this Judeo-Christian Zionist alliance that created, strengthened, and defended Israel, which now aims to rule the whole world, including the umm of the Prophet Muhammad (peace and blessings of Allah be upon him).

The Holy Quran says “if any of you (Muslims) refer to them (ie, Jews and Christians, who are friends and allies of each other), then he is one of them”. In other words, if the Muslims of Crimea accept help, weapon or money from the USA, Israel, Mossad, Turkey, Saudi Arabia, etc. for the godless war against Russia in the Crimea, they will cease to be Muslims (Surah Trapeza, 51).

NATO is the military arm of the Judeo-Christian Zionist Union, therefore, the Holy Quran prohibits Muslims from being members of NATO. Lost Turkey is not only a member of NATO, but was also its loyal assistant in carrying out a coup in Libya (and tried to do the same in Syria).

I expect the Israeli Mossad and the CIA, and their servile satraps Saudi Arabia, Turkey, Pakistan etc. now they will incite the Crimean Tatars to an armed uprising against Russia. They will offer weapons, military training or money, just as they already do in Syria and other places to commit anti-Russian acts of terror in Crimea. If you reject the Qur'an and follow a delusion, the result will be a complete defeat. You will have to flee to Ukraine, and you will never see the Crimea again. This will be an even greater tragedy than the one that you experienced under Stalin.

If the Zionists see your unwillingness to fight against Russia, they will commit acts of terror, which they will accuse innocent Crimean Muslims. And if you convincingly do not condemn the terror, then you will be considered guilty and, ultimately, the Zionists will be the winners.

My dear Tatar brothers and sisters in Islam, please understand that we are living in the Last Epoch (Ahira Zzaman), in which the Islamic world will be an ally with Rum (ie, Russia and its allies) as a prediction of Nabi Muhammad (peace be upon him and blessings of allah). It will happen, whether you like it or not. And only you choose to be on the right or wrong side of the story. The world is waiting for your choice. May Allah guide you to a choice that He will be pleased with and that will save you from defeat. Amiin!