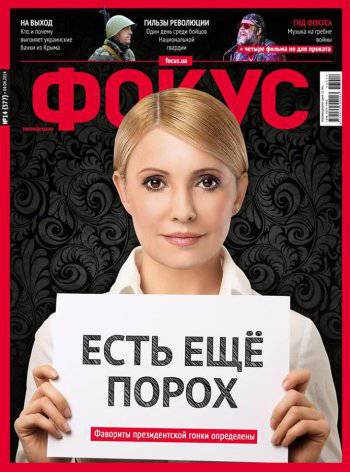 Sociological polls conducted on the special order of “Batkivshchyna” confirm that Yulia Vladimirovna does not have a full-fledged presidential rating. With a big creak she goes to the second round and crushingly loses to you know who. The study was ordered to the office, which until recently worked with the “regionals”. The results, of course, are classified. But we, you understand, managed to take advantage of the connections that had been developed. Glancing at the presentation of the results, I understood why Tymoshenko was shocked.


Indeed, he is growing, and she is rapidly falling. The level of distrust of Tymoshenko as a politician is 76%. Moreover, Sergey Leonidovich Tigipko, who is always young, always promising, is revived in her back, reviving either a working or a strong Ukraine. Poroshenko – Klitschko’s unnatural alliance tore its presidential prospects into a fascist flag. [/ Left]

In the regions in general, the picture emerges absolutely bleak: even the Galichansky electoral reserve, which traditionally loved the “mother” to the point of recklessness, prefers completely different candidates. She went down to third position altogether. It was only possible to preserve the core in the deaf villages of Central Ukraine. And it’s not a fact that the data obtained are representative. On the southeast, I generally keep quiet. And the elections in two months. And for the remaining time it is impossible to change the balance of electoral forces by traditional methods. The campaign is transient, electoral sympathies of those who will vote (and this is by no means all) are determined. Administrative resource does not help. Nobody will invest hundreds of billions of dollars in advertising. Especially Yulia Vladimirovna, who terribly does not like to spend her honestly earned funds pushed into offshore accounts. At the very same, as you know, there is nothing but a box from under the TV "Sharpe", where she, in fact, spends the night. And the house on the Kiev dam is not hers. She keeps her crutch there. In the pantry. Together with the dog.

After a careful study of a secret sociological study, Kytsünder became slightly sad. The initial idea of ​​throwing the crap over the sociologists who prepared the very first study about the ratings of the candidates was considered inexpedient. Social counters insured and spent measuring all shobla. Razumkov Center, KIIS, "Rating", SOCIS.

In general, all grantoedy offices in full. And there is simply no time to wet them. However, everyone who knows Yulia Vladimirovna is well aware: she does not intend to give up. Even if you have to shoot the entire electorate from a nuclear weapons, and then, for reliability, finish the bacteriological pistol with a control shot into the nucleus.

Tymoshenko had a presidential campaign plan drawn up by the remnants of the plans from her team. Many, by the way, once left grain places and went to work in competing political offices. The most loyal type of Marina Soroka remained, but loyalty, as we know, will not replace brains. But with the presence of the brains of Yulia Vladimirovna today is extremely tight. He partially burnt his coke. And for three years, she was far behind the reality, listening to fairy tales performed by Turchinov, Kozhemyakin and Arseny.

The plan was to begin, as far as possible, to distance the “mother” from the unpleasant processes taking place in the country. An attempt to take possession of the Maidan mass fell under the roar of the crowd "went to x ... d, s ... ka." Therefore, we decided to go to “Sharita” in order, first, to confirm the legend of a sore back, and second, to make a normal front facelift and change the hairstyle. And, of course, blind Kybyunder with an alibi about Crimea. “Oh, if I were in power, then never, you hear, the boots of Putin’s soldier would not defile the sacred Crimean land.” For a convincing legend of the topic “I am not in the business, I am treating my back, I’m not bothering anyone”, a disinformation about the “split in the BYuT team” was launched. Like Turchinov at the Security Council, he is not shy and silences Tymoshenko’s mouth with almost dirty floorcloth, Yatsenyuk and his team are doing in the Cabinet of Ministers what they want and show the facts of Yulia Vladimirovna. Even the secretary of the National Security and Defense Council Paruby slurredly (incidentally, as always) hints at Kitsa, nobody has seen her on the Maidan.

In fact, all this is a lie. With the exception of Parubiy, who really bit a certain object in his mouth and set out to make a special body out of the National Security Council to manage all security agencies. To begin with, he imposed a tribute to all commerce in the center of Kiev with the help of his “paramilitary” formations, became economically independent, gave Syumar some money and launched a powerful propaganda campaign to disrupt Putin’s plans.

Until he was stopped, Andryusha managed to thwart at least three attempts to seize the sovereign territory of the country. Turchinov, Yatsenyuk and Avakov are in the zone of influence of Tymoshenko. She knows how to fool people. Arseny, of course, tried to bet on the Poroshenko-Klitschko alliance, but he was given arguments. And they promised prospects. In short, they were pressed and made gingerbread.

As for the great commander Alexander Turchinov, no one should have any doubts. This is an orthodox yulek, who does not think of his life without a “mother”. Yes, he steals, but who among us is without sin?

After Julia is distanced from the shit, the election campaign will begin. She started at Savik Shuster when Tymoshenko with smooth, slick with the help of a cow (or a press secretary, which, however, is the same), tried to have sexual intercourse with the collective brain of the electorate for four hours. However, despite the sterile conditions in the studio, created by Savik for a modest, purely symbolic reward, intercourse did not occur. Something happened to the charisma of Yulia Vladimirovna. She no longer works. For three years, all her signature antics and demeanor have become hopelessly outdated. The people are no longer on such cheap stuff. And it was after this broadcast that Tymoshenko realized that she had to change the plan. Otherwise fox. The defeat in the presidential election will lead to a sweep of the youlles from all leadership positions. And the inevitable early parliamentary elections "gadyushnik" (terminology of Yulia Vladimirovna) roll up the remnants of BYuT in the asphalt on the ring road. Plus, the capital will go into the management of a boxer, which is very annoying to Tymoshenko. However, Kytsünder has a pathological thirst for power. It is worth considering. If, in accordance with the existing layouts, it does not shine, then it is necessary to change the layouts. Therefore, today Tymoshenko is extremely interested in a war with Russia. Strictly speaking, this strategy is based on this. Immediately after the parole, Yulia Vladimirovna strained all her connections to reach Vladimir Vladimirovich. She was ready to secretly come to the Kremlin in a Xerox box to make a deal with him: “I give you the Crimea, and you guarantee my presidency.” But they gave the Crimea without Yulia Vladimirovna. It's true. She thought she paid the deposit. However, everything was exactly the opposite. Now Tymoshenko wants war with Russia before the presidential election. If the invasion begins, the presidential campaign will have to be stopped. Since it is she who controls power today, negotiations, even if not formal, will be conducted with her. Tymoshenko doesn't care which part of the country to rule. Just to rule. This is the cornerstone of its strategy. However, Putin did not respond to the appeals of Yulia Vladimirovna, which, by the way, clearly fit into the article on the conspiracy.

Therefore, at present, Tymoshenko’s toolkit is extremely small. Either achieve the elimination of competitors, or provoke a breakdown of the elections. She simply has no alternative. There is still a scenario of the beginning of a civil war by pushing the east and west of the country. And all these paranoid scenarios can become a reality for one simple reason: Tymoshenko flies past the ticket office.