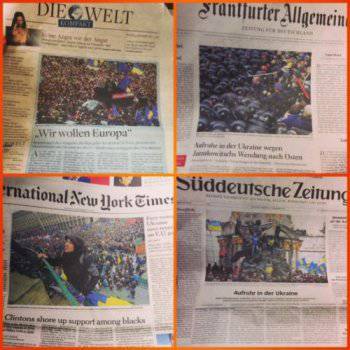 An unprecedented wave of anti-Russian propaganda launched in the German media against the backdrop of the Kiev coup d'état, carried out with the support of the US and the EU. Not only the leading publications - Der Spiegel, Die Zeit, Süddeutsche Zeitung and Frankfurter Allgemeine Zeitung - but also the so-called “alternative media”, for example Taz (closely associated with the Green Party) loudly demand military action against Russia in an attempt to outdo each other in malicious attacks on Vladimir Putin, whom they call the new Hitler and the aggressor.


This propaganda campaign, recalling the press conformism of totalitarian regimes, has not yet had the desired effect, writes the World Socialist Web Site. Many readers are deeply perturbed by what is happening and react angrily to the actions of the media. All this can be seen from the published letters in the editorial and online comments on the sites.

19 in March, the editorial board of the Berliner Zeitung was forced to admit: “German newspapers and radio stations receive bags of letters and comments from readers complaining about one-sided coverage. Russia's intervention in the Crimea finds real understanding, and the German media, on the contrary, are accused of conducting an anti-Russian campaign. ”
Even the conservative edition, Berliner Zeitung, noted that 80% of 12 000 readers who participated in the online survey considered Moscow’s official criticism a “model of hypocrisy.” Only pitiful 4% came out in support of "NATO military intervention" or "Russia's exclusion from G8."

In the letters and comments addressed to the editors, many readers and radio listeners talk about the active role played by the United States, the European Union and Berlin on Independence Square - a role in the coup d'état against the legally elected Kiev government.

One of the readers of Münchener Merkur writes: “From my point of view, demonstrations in Kiev - with Klitschko at the forefront - are organizationally and financially controlled by the West (i.e., the EU and Europe), and the former US Treasury Secretary in the Reagan administration spoke about $ 5 billion. Since the revival of capitalism in Eastern Europe, the United States has sought to weaken and isolate Russia, as well as to destroy its superpower status. ”

The author is sure: “The US and the EU have already led the Baltic countries and almost all the states of the former Eastern bloc to NATO and the EU. Now they are going to act further, putting forward the idea of ​​membership for Ukraine. Those. they are going to reach the western borders of Russia and provoke the Black Sea Fleet of the Russian Federation ”.

Many readers are disgusted by the trivialization of the role of the fascist party "Freedom" and the statement that the events in the central square of Kiev have something in common with democracy. A series of reports and a series of videos on YouTube clearly reveal the role played by the ultra-right violent fascist forces.

10 March Münchener Merkur publishes a comment from Dr. KHB: “Truth became the first victim of the war. This is a war, and therefore I suppose - neither the leading Russian media, including their state television, nor our media speak the truth. ”

Another reader was outraged by an article published by 18 March in Thüringer Allgemeine “The annexation of the Crimea is akin to Hitler’s invasion of the Sudetenland” and he writes: “a shameless attempt to level Putin with Hitler is again being made.”

The enraged listener turns to Radio Germany: “I have to tell you that I am tired of listening to half-truths and biased reports about everything connected with Russia, performed by your radio station. If I was correctly informed, Radio Germany is the direct heir to RIAS radio station, which has gained a reputation as a fierce propagandist. I think you behave like their heirs. "

A certain E.R. from Erfurt calls the charges against Russia - "the aggressor, resorting to the methods of the 18-th century" - "deliberate slander."

Concerns about the escalation of the threat of war are shared by many. So, one of the readers, still believing that NATO countries will limit their activity to verbal threats, writes that no one wants to “die for the interests of Kiev extremists. An economic war with resource-rich Russia will have fatal consequences for both sides. ”

In a letter to the Braunschweiger Zeitung, a reader with HS initials warns: “War is on the horizon? This should be avoided at all costs. ”

In response to the article “Merkel warns Putin”, published in the Badische Zeitung, the British reader declares: “Attention! This should be especially clearly understood by Germany: humiliation in matters of bilateral and multilateral policy can be fraught with dire consequences! It was the humiliating conditions of the Versailles Treaty of 1919 that caused the Second World War. ”

Some listeners of Radio Germany make direct parallels with the propaganda of the Second World War: “I have the impression that your transmitters are again calling for war with Russia. Your radio station has adopted the megalomania of the great German Reich. ”

Another commentator notes: “Every day, listening to the Nazi calls from the radio station, i.e. The campaign launched by Radio Germany against Russia and aimed at convincing the public of loyalty to the NATO course is beginning to fear for peace and security throughout Europe. ”

Ctrl Enter
Noticed oshЫbku Highlight text and press. Ctrl + Enter
We are
Crimea is Russia. What do the Germans think about it"Bloody dogs of the Kremlin." Is it true?
Military Reviewin Yandex News
Military Reviewin Google News
120 comments
Information
Dear reader, to leave comments on the publication, you must sign in.