Putin will “liberate” the Southeast by May 9, - a Russian expert ... or will time another symbolic date 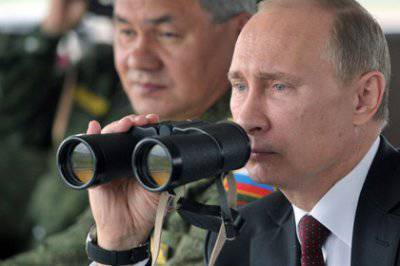 The Kremlin will complete the operation to annex Russia to the southeastern regions of Ukraine on Victory Day 9 of May or on the Day of the Liberation of Ukraine from the Nazi invaders 28 of October. This opinion was expressed by Russian political analyst Vladimir Platonov, reports New region.


“Such a scenario is quite likely against the background of too massive Kremlin propaganda, which not only does not reduce the momentum, but rather the opposite - it spins even more. The population of the Russian Federation has already been morally prepared to accept new regions into the Russian state. It is in this case about the south-eastern regions of Ukraine, where, if you believe (and too many, by the way, believe), the “fascist-Bandera” evil beings, ”noted Platonov.

In his opinion, the Kremlin is unlikely to stop at the accession of Crimea to the Russian Federation, since the preparation of the division of Ukraine was carried out carefully and for a long time - about ten years.

“I am increasingly convinced that the preparation for the annexation of the Ukrainian territories began long before the current events. One of the possible key dates is 2004's so-called Orange Revolution. Most likely, the idea appeared after Viktor Yushchenko came to power in Ukraine, and after the gas wars of the middle of the last decade, the idea acquired concrete outlines even in the form of the very same South Stream. Then no one could have imagined how vital South Stream would be in the present conditions. But now, when the period of hard confrontation has come, which obviously will only increase, the South Stream acquires meaning, ”the political scientist said.

He recalled that the successor to Yushchenko, Viktor Yanukovych, was no less actively stirring up nationalist sentiments in Ukraine, it was under his rule that the ultranationalist “Freedom” came to the Verkhovna Rada.
“Yanukovych diligently turned a blind eye to the chanting of Bandera and Shukhevych, whom the whole civilized world (not only official Russian propaganda) considers fascists. After many years of systematic preparation for the entry of Ukrainian nationalists into power, this power came into their hands, ”states Platonov.

He notes that at the same time, preparation was also being conducted inside Russia. “Suffice it to recall the closure of foreign accounts of officials, the declaration on the deoffshorization of business, and so on ... The policy of the“ gas club ”is on the same list - the Kremlin deliberately pushed Ukraine towards radicalism and anti-Russian speeches - the most vivid of which can come from western Ukraine, which they did, ”he recalls.

The annexation of the Crimea was the first result of this preparation, but perhaps not the last, the expert believes.
“If the preparation was carried out long and carefully, then other moves ahead were calculated. Obviously, Russia needs land access to the Crimea. Obviously, Russian metallurgical oligarchs could have their eyes on the delicious Ukrainian factories, mines, etc. in Donbass, Dnepropetrovsk ... I think that they will pay back a significant part of the costs that are now required to seize the Ukrainian territory. Really, after so many years of preparation, the Kremlin will so easily abandon the implementation of its plans? Not sure. Quite the contrary, he warns.

A political scientist cites in confirmation of his predictions facts of television propaganda about the atrocities of “Bandera’s” and forcing the situation by Russian officials: “Recently, suspiciously often, stories about Bandera’s attacks on veterans of the Second World War who defeated 1945 fascism began to appear m Today, the Ministry of Defense of the Russian Federation has declassified materials about the atrocities of the very "Bandera". There are no such accidents. The atmosphere is injected. It is obvious".

At the same time, he noted that in Russia there was only one “holy” topic - the theme of Victory in the Great Patriotic War against fascist Germany. “This topic is obvious and indisputable ... Against the background of the fact that Kremlin propaganda equated Ukraine to fascist Germany, it is logical to assume that the victory over Ukrainian“ fascists ”will be won by 9 May. It will be very symbolic. There is another possible date. This year, the Victory Day will be a “non-circular date”, but in the fall there is the Day of the liberation of Ukraine from the Nazi invaders. 70 years. More symbolic, ”he said.

According to Platonov, the choice of the exact date of the current "liberation" of Ukraine from the "fascists" will depend on several factors, including disarmament or disarmament by the new Kiev authorities of the Right Sector, provocations against the Russian-speaking population, etc. “On the one hand, it is more profitable for the Kremlin to deal with the southeast of Ukraine more quickly, since the sobering up of the annexation of Crimea may come unexpectedly quickly. On the other hand, it is important to convince everyone that it was the “fascists” who captured Ukraine, to accustom Ukrainians to the idea that Crimea is part of Russia ... Well, by the autumn the situation in Ukraine would be shaken by itself due to economic problems to such an extent that a new Maidan is possible . In general, there are arguments in favor of 9 May and October-2014. What the Kremlin chooses, “Time” will surely show this, ”the political scientist believes.

According to him, it is obvious that there is something else: the dollar rate, the price of oil, the size of the GDP and so on are only ordinary data that only specialists will remember, and the joining of territories will be included in history. “No one remembers what the prices were for hemp, flax, and cast iron under Catherine the Second, but everyone remembers that it annexed Crimea, Little Russia. So it will remain in history. And Putin will be remembered not by “swamp affairs”, not by “Kursk”, to whose death he is not at all involved, and not even by the “second Chechen one”, but by the Crimea ...

And now, in order to consolidate this geopolitical maneuver, we need the south-east of Ukraine and, possibly, Transnistria. And it turns out that not only Catherine the Great joined the “Chersons” and “Odessa”, she also took Moldova away from the Romanians. Here you have an explanation of why the Kremlin remembered Transnistria, which, by the way, after the same legal referendums as in the Crimea, for joining the Russian Federation, until recently remained a Moldovan republic. In the 2006 year, the PMR for the last time spoke in favor of joining Russia, but Putin left this fact without his movement. Probably just waiting for the right moment, which is now, it turns out, has come, ”concluded Platonov.
Ctrl Enter
Noticed oshЫbku Highlight text and press. Ctrl + Enter
We are
Contrary to Nuremberg: new trends and forms of propaganda of fascismInterview of V. Putin to Channel One and the Associated Press Agency
Military Reviewin Yandex News
Military Reviewin Google News
131 comment
Information
Dear reader, to leave comments on the publication, you must sign in.