Ping-pong on the blood of "victims of the revolution" 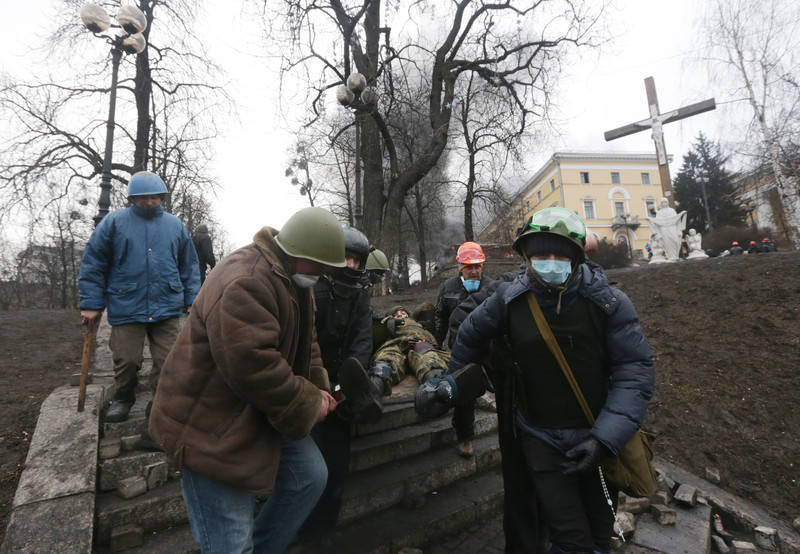 When not so long ago, Russian Foreign Minister Sergey Lavrov expressed the hope that the investigation into the snipers' case would be completed and not “swept under the carpet”, he probably knew what would follow. Namely, the accusations of Russia that it was “preparing snipers” who had worked so bloodily on the streets of Kiev during the February 18 coup in 22 of the year in Kiev will surely be voiced. Lavrov also said that Moscow has already shared with its western partners its fears and suspicions that everything is not so clean with the shooting on Independence.

But even he, probably, didn’t suspect how dirty everything would be when three bogatyrs of the modern Ukrainian law enforcement system, the heads of the Ministry of Internal Affairs and the Security Service of Ukraine, Arsen Avakov and Valentin Nalyvaychenko and the Prosecutor General Oleg Makhnytsky, will take on the “snipers case”. And they 3 April of this year, went to a joint press conference and proved: in war, as in war - any means are good. And they used the case of the destruction of the "heavenly hundred" to settle accounts on the outside, and - this is the most disgusting - on the domestic arena. They simply prepared an otvetku and threw the ball to "enemies". Like ping pong. Without noticing that the ball is bloody ...

In the terminology of the current Ukrainian authorities, Ukraine today "reflects the aggression of Russia." And under the leadership of Alexander Turchinov, Commander-in-Chief, but mostly the powerful NSDC secretary, Andrei Parubiya, he wins one victory after another, directly plunging the Kremlin strategists into horror and gloom with his cunning. The operation in Crimea was especially successful: Ukraine threw a depressive region to the "aggressor" and got rid of its fleet and ports. The benefit is direct: unnecessary territories are lost, and sailors with their ships are now no longer needed. But what a savings for the budget!

Truth, Yulia Tymoshenko’s bidding for the Crimea, hoping to get a “label for reigning” in the rest of Ukraine, first of all in the Kremlin, was disrupted, though, and received an unbearable price for Russian gas. But this is nothing for real patriots. Especially since they personally will not feel all these inconveniences. To do this, there is a patience, “narid”, who just needs to skillfully hang noodles on his ears and cause a patriotic upsurge and hatred for the “aggressor”.

The aforementioned “holy” trinity of legalists dealt with this at a press conference. They reported that even 23 February, literally hot on the heels, united all the 74 criminal cases about the murders of 76 people during the riots in Ukraine. And although, according to all three, the Prosecutor General’s Office, the Interior Ministry and the Security Service of Ukraine still have no complete picture of what happened, or are not ready to disclose all the details, the enemies are already known.

This, of course, is Russia and its FSB, which have become a wall behind the back of the Ukrainian “Golden Eagle”. His fighters felt impunity and soaked everyone left and right. And if Avakov and Makhnitsky still somehow tried to keep within the bounds of decency and didn’t lie much about snipers, then Nalyvaychenko, like a real CIA student, who has to complete the task, did not restrain himself: “There are also questions to the representatives of the FSB of the Russian Federation, December and January, more than 30 people were at the SBU training ground. There is information that these employees collaborated with the former head of the SBU Yakimenko, he went to them. Requests were sent to the FSB and the Ministry of Foreign Affairs of Russia in order to find out the names and titles of these employees, and who called them here. ” According to him, when people were shot on the Maidan, “in Zhulyany and Gostomel landed planes from Russia, which brought 5100 kg of explosives and weapon».

And here is the result of a titanic investigation: on 3 on April 2014, a total of 12 "berkutovtsy" were arrested, allegedly involved in the killings of the "revolutionaries". And this only shows that the new Ukrainian authorities are going to act to the end exclusively in the offensive-revolutionary paradigm, guided by the revolutionary-political expediency dictated by the current moment, and not law and justice. And the worst thing is that the blood shed on the Maidan will be commonplace for internal squabbles, revenge, falsification and deception.

In other words, the authorities will At first, shift the blame for the incident solely on the regime overthrown by them. And not to see the guilt of the organizers of the putsch, or of its ordinary performers. According to the Prosecutor General’s Office, during the shooting of peaceful demonstrators, by quite strange coincidence armed with bats, Molotov cocktails, small arms and cold arms and peaceful fun for storming the authorities, the so-called “black company” especially committed atrocities. That is, the Kiev division of "Berkut", the soldiers of which, according to the GPU, were given Kalashnikov assault rifles, sniper rifles and other weapons. From it they, de, "suppressed the revolution." Receiving orders according to the scheme "President - Presidential Administration - Interior Ministry - Security Service of Ukraine". So it was an amazing situation: an investigation into the attack on a sheep flock was entrusted to a wolf, who had not yet departed from a full lunch by unhappy sheep.

Second, the authorities will finally deal with the "Berkut". Blacken the fighters of the "Berkut" and thus avenge most of them for their loyalty to the oath and military duty. The authorities want to do this primitively, but vigorously: presenting the “Berkut people” not only as “murderers of peaceful citizens”, but also “traitors of the Ukrainian people”. It is advantageous for them to tell that many employees of the “Berkut” after the change of power in Kiev came to the Crimea and Russia, which means “betrayed Ukraine”. And what exactly in Crimea 7 of March of this year, the major of the local “Golden Eagle” Alexander Vasyukov called the statement that during the riots in Kiev snipers from among the “berkutovtsy” acted as a lie. The major reported to the public: his colleagues did not take firearms to Kiev, leaving him in storage in the arsenal at the base in Simferopol. These words and need to disavow and defame the Kiev authorities.

Third, insist on their exceptional rightness in seizing power and removing from suspicion and even from the blow of their then-Western customers, inspirers and sponsors, as well as current patrons who still want to receive maximum dividends in Ukraine. The question of the “glare” of telephone conversations between Estonian Foreign Minister Urmas Paet and EU head of diplomacy Catherine Ashton from 26 of February this year was completely ignored by the answers that opposition activists involved in the shooting of demonstrators were involved in the execution of protesters. Estonian Minister Paet, as you know, argued that after a detailed study of the circumstances of the violence in the center of Kiev, “there is a rapidly growing understanding that there was not Yanukovych behind these snipers, but someone from the new coalition was behind them.”

Ashton heard this, and therefore, as a true champion of democracy and the rule of law, should have responded accordingly, rather than covering up potential killers. But the killers have already been enrolled in the "Democrats" and "Europeans" and should be beyond suspicion. As well as Madame Ashton herself should be “the bright redeemer of ukronaroda from totalitarianism”, and not a cynical politician covering crimes, even if they were committed allegedly for the sake of democracy. That is all the blame and shift exclusively to the "Golden Eagle".

Fourth, in every way possible to conceal the participation in the "revolution" of all sorts of militants. In particular, from the “Right Sector” and the militarized detachments of other opposition parties. It throws a fat black spot on the “bright” look of the “revolution”, turning it into a banal armed coup, which was accomplished by people prepared for other people's money and by someone else’s order. In addition, it emphasizes the unseemly role of Western sponsors in the organization of “territories of controlled chaos” in the states chosen for such “democratization”.
And he warns these countries, in particular, Russia and Belarus, that they, too, must be prepared for similar scenarios and familiar performers. The most active and prepared militants who committed a coup in Ukraine, these “landsknekhty revolution” on wages have already been withdrawn from the Maidan and sip beer in training camps, grinding their skills in throwing “Molotov cocktails”. It will be useful on the streets of Minsk and Moscow, in which case ...

Finally, fifthly, use the charges against the "Berkut" in the contradictions that have arisen already inside the new government. In particular, to diminish the role of the same “Right Sector”, which challenged the temporary workers, calls them a “new gang” (“panda” according to Ukrainian terminology), accuses them of having links with new and old oligarchs and talks about the continuation of the “national revolution”. Until the complete destruction of the oligarchs in Ukraine. But the authorities are not profitable: for them, the oligarchs are money.

In addition, the Right Sector is arguing with the Freedom Party, which of them is morestories is valuable. And who shed more blood bags on the streets of Kiev during the coup. Svoboda claims that Xnumx fighters have been lost from the "heavenly hundred". "Pravoseki" say that all the others are among them. Another paramilitary structure, “Maidan’s Self-Defense”, is also wedged into this dispute, which turns it into a shrill barking of quarrelsome old women, and not into “writing a chronicle of the revolution” for future generations.

In addition, the leader of the "Right Sector" Dmitry Yarosh goes to the presidency. And he is the very “new face” in Ukrainian politics. That "possible third force", which is capable of confusing pre-election decomposition of many. Here Yarosh and try to discredit, downplaying the role of the entire "Right Sector" and declaring it "the project of the Kremlin." Especially since Moscow involuntarily “signed up” when its Minister Lavrov said that Russia had the data: the Right Sector radical organization could lead the shooting of snipers on the Maidan.

And today it is obvious that the new Ukrainian government does not want to hear anything about a fair investigation and already seems to have appointed the guilty, who will go to the demonstrative slaughter. Under the cries of "so wants Maidan." And the will of the Maidan for power-the type is sacred.

Well what can I say? When Bulgakov's Preobrazhensky professor encountered the Maidan demand for justice performed by Shvonder and Sharikov, he saw the light and involuntarily warned all future maydauns: “Well, Shvonder is the main fool. He does not understand that Sharikov is a more dangerous danger for him than for me. Well, now he is trying in every way to incite him against me, not realizing that if someone in turn incites Sharikov on Shvonder himself, then only the horns and legs will remain from him ... ”

Ctrl Enter
Noticed oshЫbku Highlight text and press. Ctrl + Enter
We are
A great interview with Sergey Lavrov: about Ukraine, Obama and IranWhat you didn't want to know about England
Military Reviewin Yandex News
Military Reviewin Google News
31 comment
Information
Dear reader, to leave comments on the publication, you must sign in.