April 7 2014
143
This post I created under the "impression" of articles published on this site "New torpedo to replace the" Squall "," "Is there a torpedo more dangerous than the" Squall "?", "The fastest domestic underwater missile BA-111" Squall "." Apparently, the authors misunderstand the purpose of the Squall rocket-torpedoes, and I want to correct it. I will not bore you with the transfer of technical characteristics, you can easily find them on the Internet, for example, here: http://militaryrussia.ru/blog/topic-473.html. Let's go straight to the point.


Created "Squall" in those years when the Soviet submarines NATO called "stinking cows." After all, they were high-speed, well-armed, but very noisy. NATO already built its submarines according to the recipes of the “stealth” technology (for submarines it is the least noise) and the concept of the “first strike”. Therefore, the Soviet designers needed an asymmetric response. However, to create and build a series of completely new submarines in a short time was impossible, and to write off the old ones all at once would be a criminal waste. It was then that the development of "Squall" began on the proposed promising scheme for its use. 29 November 1977, the complex BA-111 "Flurry" with a jet torpedo M-5 was adopted by the Navy of the USSR)

How does it work?
Starts the engine. It is visible in the photo. These are eight nozzles arranged in a circle. Extend 4 steering. Starting engine - solid fuel. On this engine, the rocket performs the after-start turn, goes to the depth of the flight and accelerates. At the same time, the hydroreactive fuel is ignited, which begins to smolder without water. After the fuel burns out in the starting engine, it is reset and the solid-fuel accelerator of the cruise engine is launched. The rocket begins to accelerate, the rudders of the course reduce the sector of disclosure. The depth of the rocket begins to be controlled by the machine turning the cavernous disc. The rocket picks up speed, the solid fuel booster burns out, and the seawater (through the nozzles) is fed through the hole in the cavernous disc to the smoldering hydroreactive fuel. The fuel burns intensely, it burns only in water. The fuel is pasty and fed by a piston. In the nose of the rocket the checkers of the gas generator are set on fire. Gas from the combustion is supplied under the cups (they are visible in the photo in the very nose of the rocket). This gas is needed to create a solid flow around a rocket, since the cavity formed by the disk for a continuous flow is not enough. Along the way, removed five steps to protect the nuclear charge. The charge has two levels of power that switch depending on the distance. At a distance of 2-5 km there will be a small explosion power, and 5-10 km there will be more power (about why such
difficulties, - further). 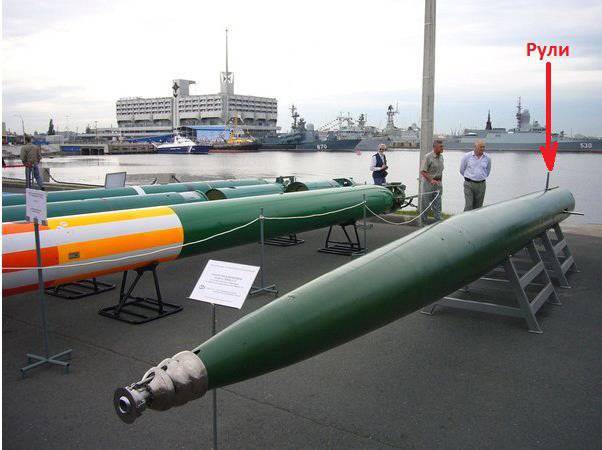 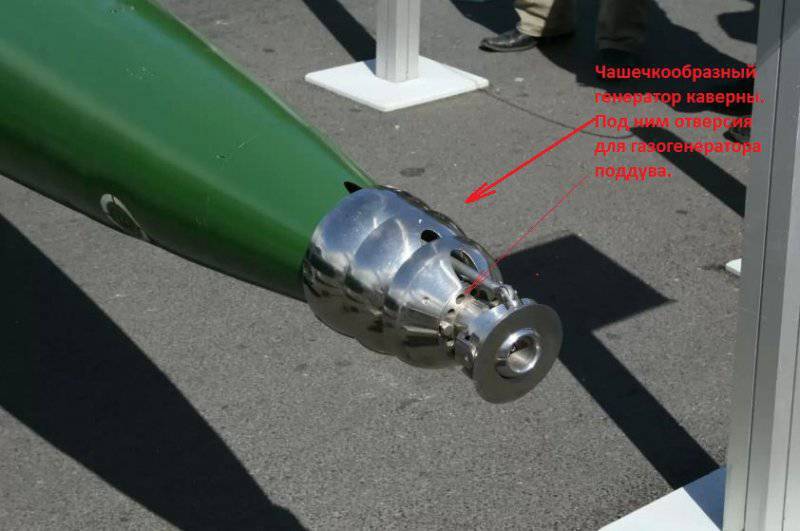 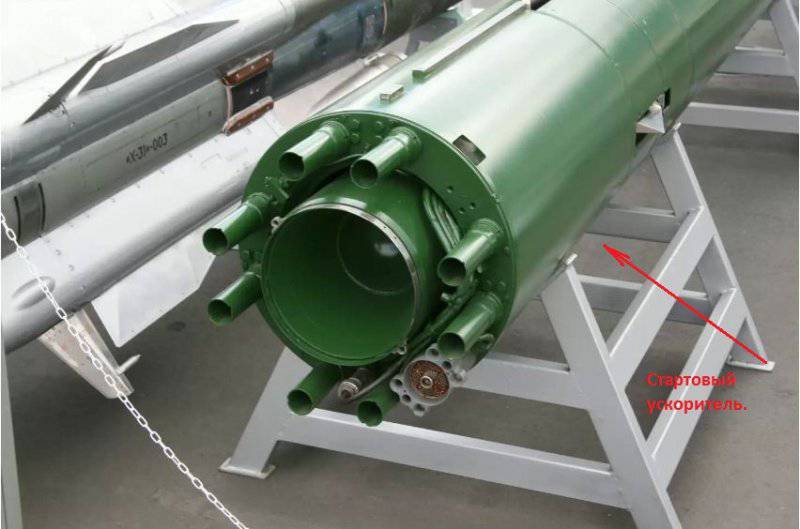 The Americans, having an advantage in the stealth and quality of the hydroacoustic station (GUS), had a very high probability of being the first (passive GAS mode) to detect the USSR submarine and make the first shot. The wire-driven torpedo had to hit our submarine with high precision, not allowing it to finish targeting the response torpedo. But, having fired a torpedo, the US NPS unmasks itself, the USSR NPS converts its HAS from passive mode to active mode in order to determine the location of the US NPS with high accuracy, while simultaneously launching the nose of the submarine (where the torpedo tubes are located) in the direction of the US torpedo shot . After receiving all the data on the target, the Squall is shot down with the location (coordinates) of the target, that is, the US NPS. After that, the USSR nuclear submarine can perform all actions to evade and counter torpedo attack without any restrictions. Now, the US NPS HUNTER) turns into a game itself, which is also very limited in its freedom of action, since its torpedo hangs on a thin wire, with which it threatens to lose contact with intensive maneuvering and going beyond the speed limits during guidance. Having the advantage in speed, "Squall", quickly approaching the goal, is able to perform simple maneuvers to avoid interception, embedded in the program of its actions. When a given point is reached, a nuclear power supply is undermined, with an underwater explosion that provides almost 100-percent damage to modern submarines within 1 km radius. Even if the US submarine instantly after the shot "Flurry" drops the torpedo pointing and starts to gain high speed to get out of the affected area, there is no guarantee that it will have time to leave or remain intact, not far from the affected area.

"Flurry" wiped out the advantages of the US NPS and their tactics.

Ctrl Enter
Noticed oshЫbku Highlight text and press. Ctrl + Enter
We are
Domestic torpedo weapons on the world marketIs there a torpedo more dangerous than a squall?
Military Reviewin Yandex News
Military Reviewin Google News
143 comments
Information
Dear reader, to leave comments on the publication, you must sign in.