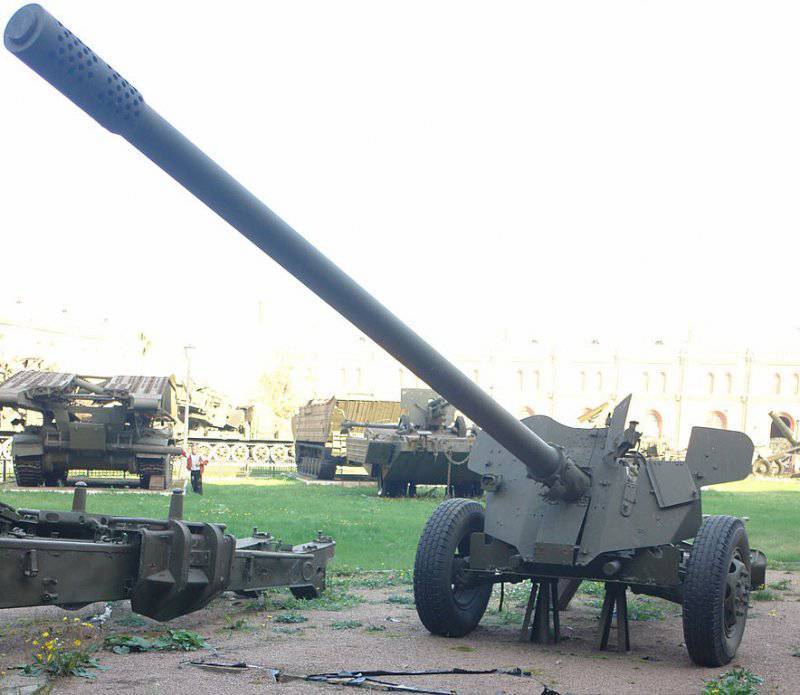 Anti-tank gun - a type of artillery weapons designed to destroy enemy armored vehicles. As a rule, this is a long-barreled gun with a significant initial velocity of the projectile. In most cases, the shooting of such a weapon is direct fire. When developing anti-tank guns, special attention is paid to minimizing its size and weight. This should facilitate the masking of the gun on the ground and its transportation.

This article will cover the MT-12 anti-tank gun, which entered service in the early 1970s.

After the war, the development of anti-tank guns did not stop. Artillery armament designers offered various options. They experimented with both the artillery unit and the gun carriage. For example, a D-44 gun carriage was installed on a gun carriage. In this way, the speed of self-movement of the gun at 25 kilometers per hour was ensured. Regarding the caliber of anti-tank guns, by the middle of the 1950-s it reached 85 mm. 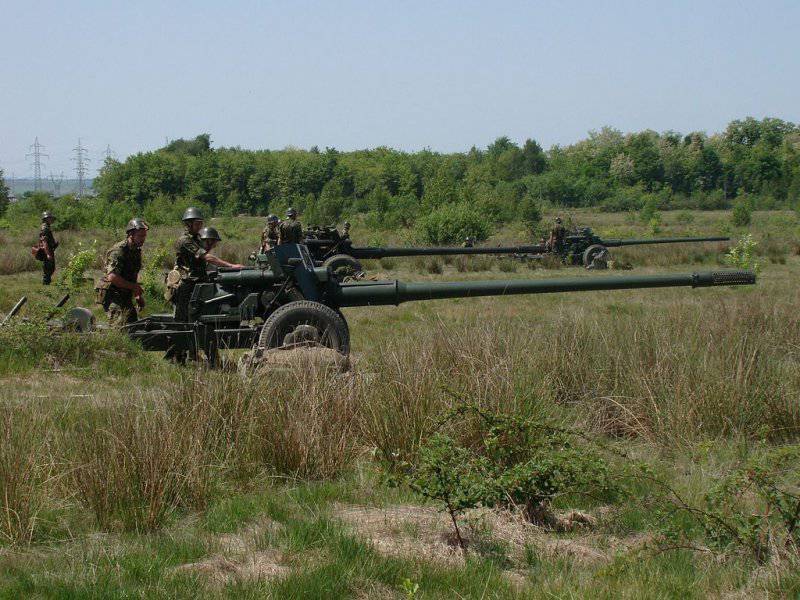 In the middle of the 1960-s, the development of barreled artillery slowed down a bit. The reason for this was the rapid development of rocket weapons. The troops almost ceased to receive new barreled weapons, with the increasing distribution of missiles. For example, the anti-tank systems (anti-tank guided missile) were commissioned by the Soviet army.

Unknown as it turned история development of anti-tank guns, if the designers in the creation of guns would not have applied one technical innovation. Until a certain time, the barrels of anti-tank guns had rifling. The grooves give the projectile a spin, thereby ensuring its steady flight. In 1961, the T-12 gun was adopted. The barrel of this rifling gun does not have - it is a smooth-bore weapon. Stability projectile is achieved by stabilizers, drop-down in flight. This innovation has increased the caliber to 100 mm. The initial velocity of the projectile also increased. In addition, a non-rotating projectile is more suitable for a shaped charge. In the future, smooth-bore guns began to be used for firing not only projectiles but also guided missiles.

The design of the gun T-12 was developed in the design bureau of the Yurginsky machine-building plant. The works were led by V.Ya. Afanasyev. and Korneev L.V. For the new gun, a double-wall gun carriage and a barrel from the X-NUMX-mm rifled anti-tank gun D-85 was used. The barrel of the T-48 from the D-12 differed only in the 48-mm smooth-monoblock pipe and the muzzle brake. Channel T-100 consisted of a chamber and a smooth-wall cylindrical guide part. The chamber was formed by two long and one short cones. 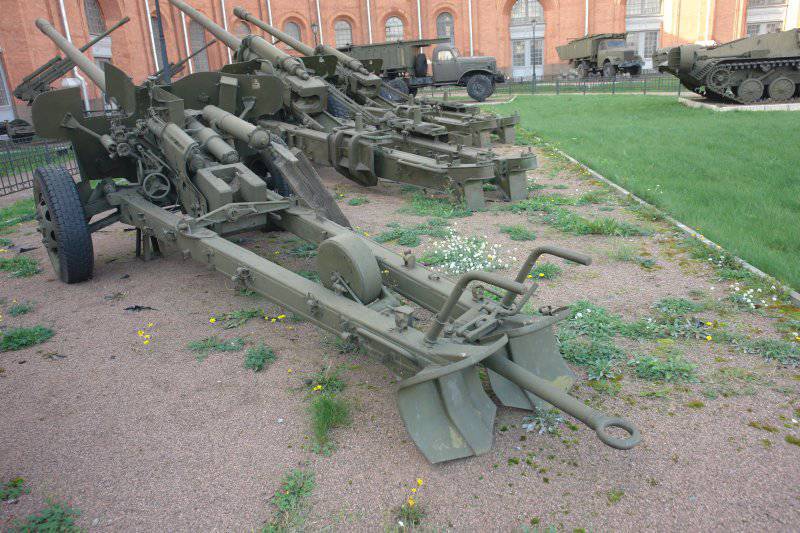 At the end of the 1960-ies for the gun developed an improved carriage. Work on the new carriage began in connection with the transition to a new tractor, which has great speed. The upgraded instrument was assigned the designation MT-12. Serial production of this anti-tank gun began in the year 1970. The ammunition included in the ammunition made it possible to hit modern at that time tanks - American M-60, German Leopard-1.

The anti-tank gun MT-12 is also known as the "Rapier." The gun carriage has a torsion bar that is locked to ensure stability when firing. During the modernization, the cushioning stroke length was increased, for which it was necessary to introduce a hydraulic brake for the first time in artillery. Also, during modernization, they returned to the spring balancing mechanism, since the hydraulic balancing mechanism at different elevation angles needed constant adjustment of the compensator. The wheels were borrowed from the truck ZIL-150.

Smooth barrel (length 61 caliber) is made in the form of a monoblock pipe assembled with a muzzle brake, a holder and a breech.

The MT-L (multipurpose transporter is lightweight) or MT-LB (armored transporter version) is used as a tractor. This conveyor received in the Soviet army is very widespread. At its base, barreled and rocket self-propelled artillery installations were created. Caterpillar drive provides the conveyor with excellent cross-country ability. A tractor is able to tow an MT-12 anti-tank gun with a maximum speed of 60 km / h. The power reserve of this conveyor is 500 km. Calculation tools during transportation is placed inside the machine. During the march, the gun is closed with canvas covers protecting the weapon from dust, dirt, snow and rain. 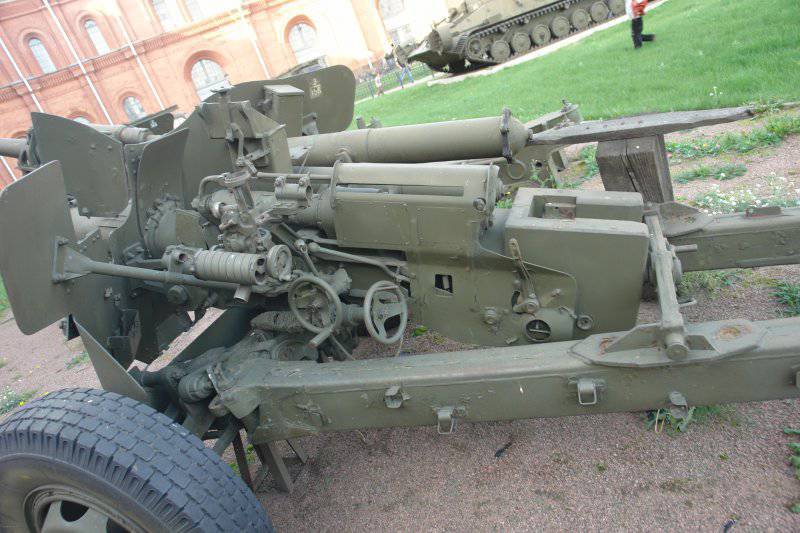 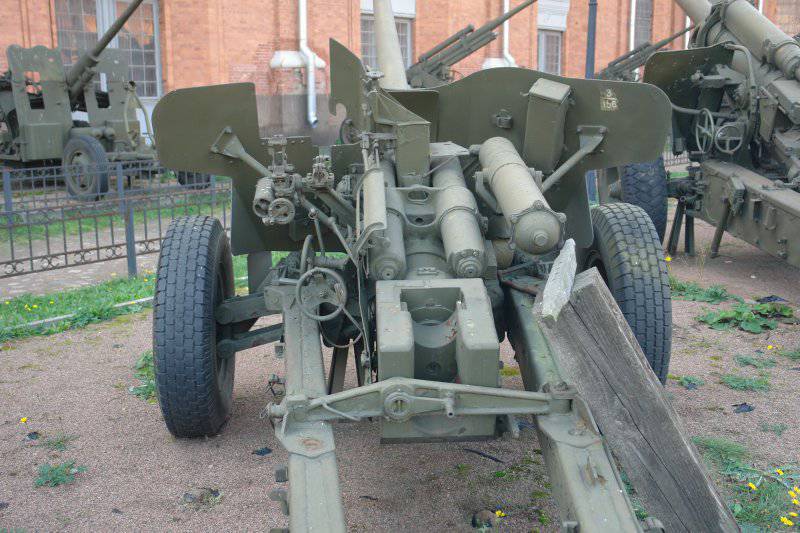 The transfer time of the anti-tank gun from the marching position to the combat position is no more than 1 minutes. Upon arrival at the position, the gunners remove the covers and the beds are raised. With divorced beds, the gun has greater stability. After that, lower the lower armor shield. Shield cover provides protection for the calculation and mechanisms against shrapnel and bullet damage. The calculation opens viewing windows in the shield and mounts sighting devices.

When firing direct fire in sunny weather or when shooting against the sun, the OP4М-40У sight is additionally equipped with a special light filter. The APN-6-40 night sight, which can be equipped with a gun, improves the fighting qualities of the gun. For shooting in adverse weather conditions, a version of the gun with a radar sight was developed.

The calculation of the anti-tank gun includes: the commander, who controls the actions of the calculation; gunner, using for guidance flywheels; charging.

The shot is made by pressing the trigger mechanism or using a cable (remotely). Valve-type tool lock, semi-automatic. In preparation for the shot from the loader, you only need to send a shell into the chamber. Before the first shot the shutter opens manually. After the shot, the liner is automatically ejected.

To reduce recoil energy, the barrel of the gun was equipped with a muzzle brake. Because of its rather interesting form, the muzzle brake was nicknamed “salt shaker”. At the time of the shot from the muzzle brake a bright flame escapes. 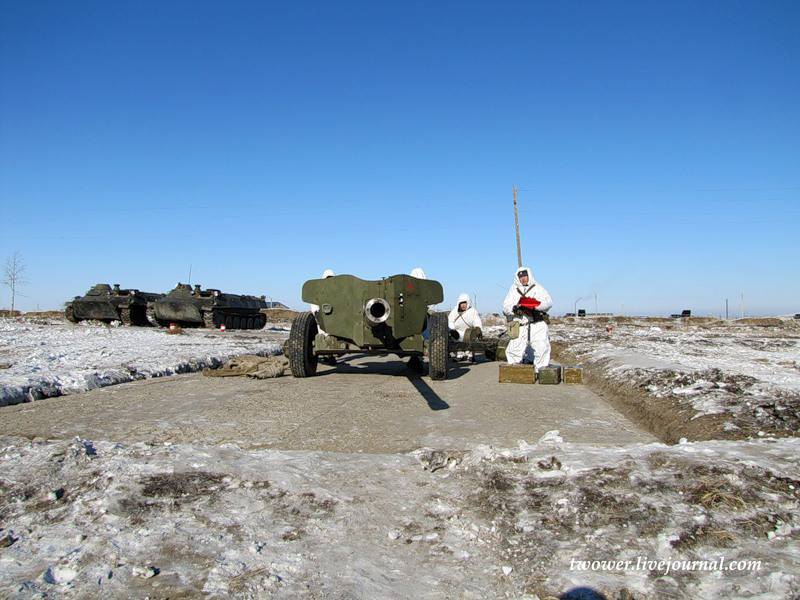 The ammunition of the gun MT-12 consists of several types of ammunition. Armor-piercing piercing shells are used to destroy tanks, self-propelled guns and other armored targets. Direct shot range - 1880 m. Shot with a cumulative fragmentation projectile, as a rule, are used for firing direct fire on targets with powerful armor protection. Manpower, gun emplacements, field constructions of the engineering type are destroyed with the help of high-explosive fragmentation shells. When mounted on a gun, a special guidance device can be used with anti-tank missile shots. The rocket is controlled by a laser beam. The maximum firing range for this is 4000 m. Shells - reusable. After making a shot, they are placed in special containers and sent for repair.

The anti-tank gun MT-12 is capable of firing not only direct fire, but also from closed positions. For this purpose, the gun is equipped with a C71-40 sight with a PG-1M panorama.

The MT-12 anti-tank gun has been in service for over 40 years. 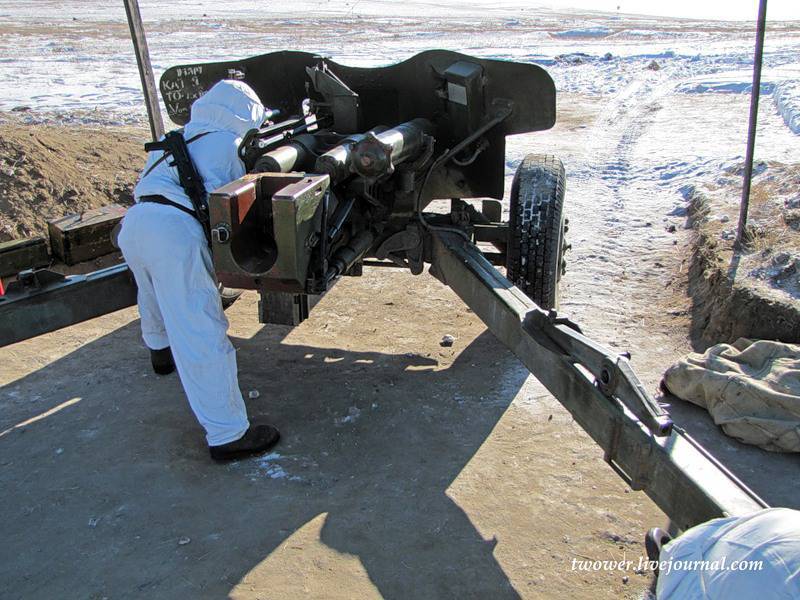 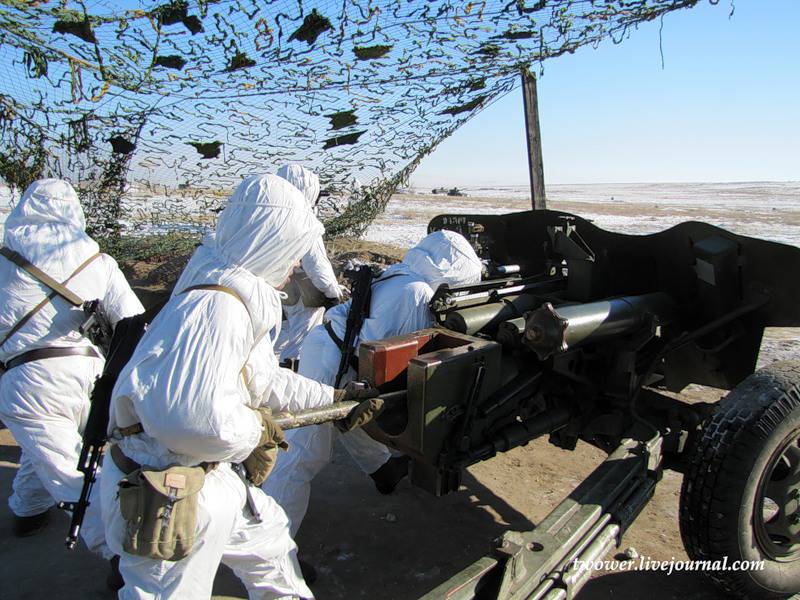 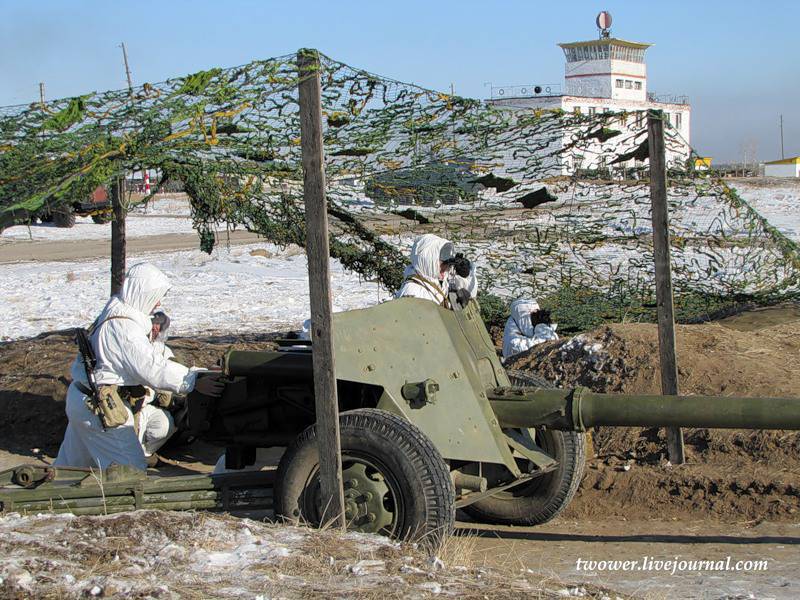 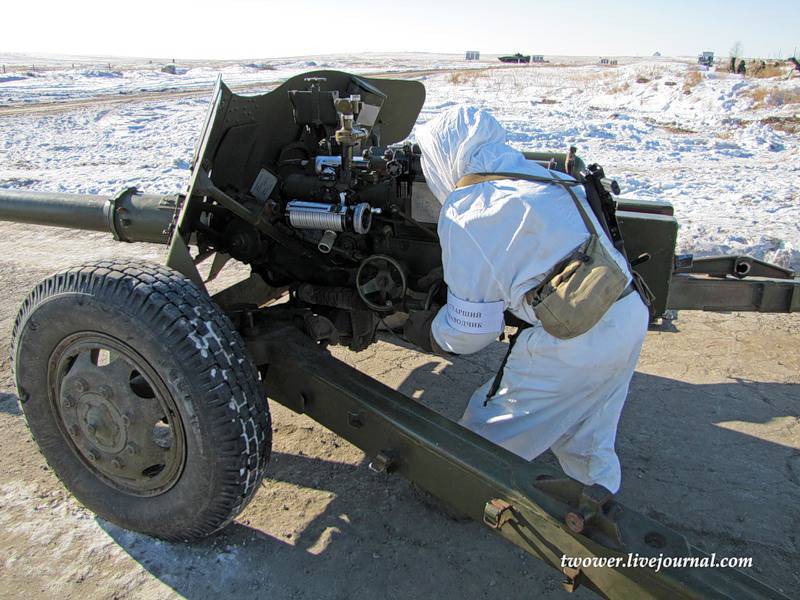 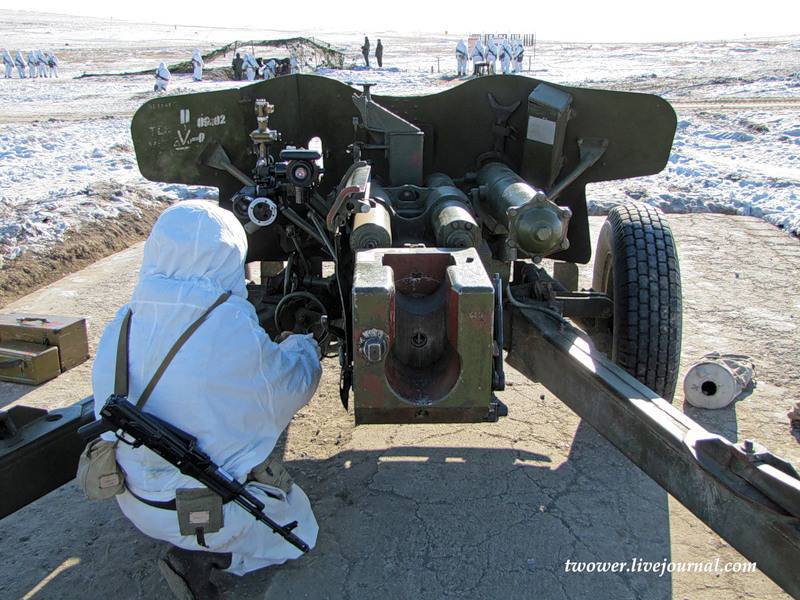