Construction of feudal Ukraine: what has been done in six months

April 6 2014
272
Autumn 2013. The reality in which there are no burning tires on the streets of Kiev. Europe is preparing to take stock of the Eastern Partnership, in the Ukrainian and Russian segments of the Internet - holy war on the theme “What will be the life after the summit in Vilnius”. Our position was clear: Ukraine is taking leaps and bounds (and most importantly, voluntarily and with a song) moving toward neo-feudalism. It's time to brush up on recent forecasts. How has the situation changed over the past months? 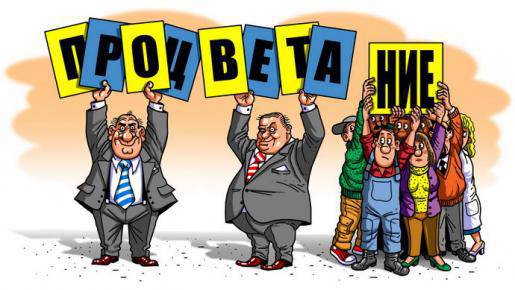 Coup for speeding up

Usually, the coup ends not only with a change of faces on TV, but also with certain changes in the internal and foreign policy of the state. The grouping within the ruling class, realizing that it fails to realize its vision of the state project (let this vision consist in the usual desire to seize the trough) in an evolutionary way, during elections, shifts the previous power by force and begins to steer in its own way. In the case of Ukraine, everything is different. The regime of Yanukovych was shifted to accelerate the course towards the feudalization of the republic.

Recall how it was:

1. Just before the summit, the rhetoric of Prime Minister N. Azarov, and then V. Yanukovych, is changing dramatically. There is information that Ukraine will not survive the economic shock of falling exports to the CU. What happened next - we all remember.

2. On the eve of the signing of the association agreement in March 2014, it turns out (!) That the government of N. Azarov correctly estimated the risks. Therefore, March 21 was signed so-called. political block of agreement, a set of declarations. The economic bloc is postponed for the summer (upon the occurrence of which it may well be postponed again). Needless to say, a worthy result of the coup.

At the same time, marking Ukraine on the spot is detrimental to its industry to the same extent as the accelerated association. The State Statistics Service of Ukraine has already recorded a drop in exports to Russia by about 1,5 times. In some industries, the situation is even worse, for example, the export of wagons has decreased by 85%. This is not even a fall, but a corkscrew.

This is not just about falling exports, this is about the rapid de-industrialization of Ukraine. And not the one that happened in 80 – 90. in Europe and the USA as a process accompanying the establishment of a post-industrial society (no, I myself do not believe in these fairy tales, but soon the Ukrainians will hear that this is supposedly quite normal, so this phrase is for them). Europe and the United States brought their production to China, India, Latin America. Ukraine, on the other hand, does not tolerate them anywhere, it simply about them ... em (the word for meaningless and irretrievable loss).

Such phenomena need to be interpreted in a complex way, although it is difficult in the format of a journalistic article. The easiest way to illustrate what is happening with a poem by S. Marshak "Nail and Horseshoe." The collapse of the Ukrainian car building perfectly fits into this formula.

So, the problems of car builders are:

3. Reducing the filling of budgets in a number of cities (Lugansk, Kremenchug, Dneprodzerzhinsk, Mariupol);

4. And, of course, reducing the consumption of households - families of workers left without earnings.

So far we are talking only about one branch - “the horse is lame”. When there are several industries, it will fit to talk about the complex dying out of the infrastructure of large industrial cities of the Southeast - it will have nothing to contain. As well as satellite cities - life in them is supported by the work of factories. As a result, the South-East will return to the feudal practice of survival, which has long been living in the West of Ukraine: half-empty villages and towns, mostly populated by children and old people (adults in earnings). This is already a reality, not coming, but coming: the volume of remittances to Ukraine in 2013 increased by 13% (to 8,5 billion dollars) and amounted to 4,7% of GDP. With such rates Ukraine will soon take a worthy place in this tablet. By the way, pay attention to her. These countries are not only permanent donors of their labor resources, but also permanent centers of instability and chaos. That, in fact, creates favorable conditions for the export of workers. Of course, chaos must be maintained, and this work is carried on tirelessly. It is this dual model (“chaos-neo-feudalism — neo-feudalism-chaos”) that awaits Ukraine. This paragraph was for those who represent neo-feudalism with some mixture of cheap popular pastoral and ecotourism.

External attributes are no less eloquent. We have already noted how the oligarchs from the nominal masters of the regions turned into actual ones, becoming not either tycoons or barons. Yes, and the overthrow of Yanukovych happened quite to himself in the style of A. Dumas (“20 years later”): fronda, princes, and the besieged monarch.

A bankrupt state cannot and is not able to manage its property. The “natural” solution in such cases is the practice of payoffs. Only now it is not a delegation of the right to collect taxes, but a large-scale privatization. It is characteristic that we are again talking about the course of the previous government, only more forced (what and how Yanukovych planned to sell, you can read here). It seems that the only fault of V. Yanukovych is that he was not enough for Yanukovych.

Against the backdrop of a series of political scandals that have shaken Ukraine in recent years, the reduction of social infrastructure has probably gone unnoticed by an outside observer. Having scored the relevant queries in the search, you will receive not yet massive, but no longer isolated facts of the closure (attempts to close) of schools and hospitals in Ukraine. Of course, a decrease in the population from 52 to 45 million people implies a corresponding reduction in educational and medical institutions. But it's not only that. The social infrastructure inherited from the Ukrainian SSR cannot be kept on tax deductions from privatized enterprises (children's task about a pool and two pipes). Taxes can only contain what the Bolsheviks started the Soviet project almost 100 years ago: Zemstvo hospitals that provided a minimum of medical care, and Zemstvo schools with a 3-4-year course of study in basic subjects (adjusted for historical difference, of course).

And finally, the process of forming mini-armies, a kind of new Landsknecht detachment, is under way.

Why is everything happening like this, because “the dictator is bad and the revolutionaries are good”? The fact is that the Ukrainian elite (the whole) has taken a conscious course toward dismantling the state. Both by our own efforts and by the efforts of foreign politicians whom the elites turned for "support".

Ukraine does not collapse as a result of chaos and war, Ukraine is falling apart in order to create chaos instead of order and state and reduce social relations to a simplified (neo-feudal) model.

Ctrl Enter
Noticed oshЫbku Highlight text and press. Ctrl + Enter
We are
Interview of V. Putin to Channel One and the Associated Press AgencyAbout Stalin and Khrushchev
Military Reviewin Yandex News
Military Reviewin Google News
272 comments
Information
Dear reader, to leave comments on the publication, you must sign in.