Elections, vandalism and social networks for "Ukrainians with pots on their heads"

April 6 2014
123
Recently, several issues have been of particular concern, the connection between which, at first glance, is not quite obvious. We are talking about the upcoming presidential elections in Ukraine, the situation with the objects of cultural heritage and the war in social networks, including very new ones.


Of course, the upcoming test for all Ukrainians in the form of presidential elections will not be an easy walk before bedtime. Almost everyone who could have done this registered as candidates for the top job. Even the hero of the movie "Star Wars" Darth Vader, whose documents are not to the taste of the members of the CEC of Ukraine.

If we put aside those who decided to participate in the presidential race for the sake of self-praise, then we will see the traditional Ukrainian alignment: we will have to choose from bad and very bad. The bad is the oligarch Poroshenko, for which, judging by opinion polls, almost 40% of Ukrainians are ready to vote, and very bad is Tymoshenko-Tyagnibok-Yarosh and company. A separate conversation is the regionals, we will return to them in the article later.

The head of the confectionery corporation "Roshen" Petro Poroshenko supported Euromaidan, the radical actions of football ultras and the "Right Sector" not only with words, but also helped with money. According to various estimates, every day the rally in the center of Kiev was operating in the order of 850 thousand hryvnia - utter nonsense for a person from the Forbes list with a fortune of half a billion US dollars.

Let me remind you that all this horror called “national revolution” with Molotov cocktails, Berkut and snipers was started just to remove indecently rich people from power, to expropriate their wealth and distribute to Ukrainians simultaneously joining the European Union.

The revolution was over, Yanukovych was overthrown, the golden loaf together with all Mezhigory was taken from him, Yarosh moves on expensive cars from Viktor Fedorovich’s garage. One of the commentators on the Internet has aptly put it about what we have today. I quote: "100 killed, 1000 injured, defeated Kiev, almost default, do not take in the EU, gas rises in price, Crimea is lost, anarchy and chaos, oligarchs became governors in the southeast. I especially want to say thanks to grandmothers who bottled gasoline They twisted the pavement. In general, thanks to everyone who walked with pots on their heads. You were born in them. " More precisely and you will not tell.

We combine Yulia Vladimirovna with Yarosh and Tyagnibok, since she decided to compete with them in radicalism and pick up the slogan “fashionable for giljaku”, which is currently fashionable. She didn’t add votes to her, but now Tymoshenko seems to have lost any chance of supporting a large part of the Ukrainian population.

With all the positive attitude towards regional Tsarev, I believe that the nomination of current and former deputies from the Party of Regions is one big trap. This will force the seething southeast to come to the polls, which automatically legitimizes them. The TV channels will get a good picture at the polling stations, non-governmental organizations will record the transparency of the vote, and the CEC will announce with satisfaction the results of Poroshenko’s victory in the first round.

I do not presume to judge how this will calm the situation in the country, because most of those who are in power now will most likely remain there except for the most odious figures. Then follows a short period of calm, attempts to bring the economy out of a corkscrew, the inevitable increase in prices for food, gas and electricity. And then there will be a social explosion, because Ukraine is not Greece. Our people live at times poorer and their belts are nowhere to be tightened.

Now about the monuments and the information war in social networks.

A few days ago I was struck to the core news that in the “Right Sector” there seems to be some kind of “black list” of cultural heritage sites to be destroyed. Along with the monuments to Lenin and the entire Soviet, among them was a monument to military pilots, beloved by all Kievites, made in the guise of the Maestro from the movie "Only Old Men Go To Battle".

My post on this topic scored more than one and a half thousand "likes" and dozens of comments where users, just like me, could not believe my eyes and threatened to stand with a living wall around a bronze actor. One way or another, a representative of the “Right Sector” was forced to make a denial of the information about the demolition of the monument, so many thanks to everyone who shared my experiences. 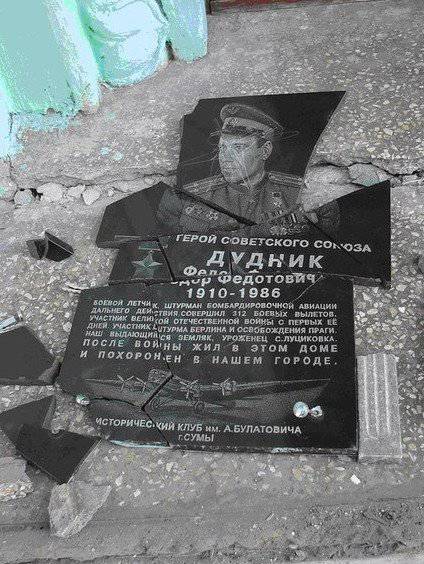 The very next day there was news that unknown people in Sumy broke a memorial plaque of the USSR pilot-hero Fyodor Dudnik. A month earlier, in Sumy, unknown people bombarded the Eternal Flame with garbage. And last Sunday, the press secretary of the Odessa cell of the Udar party, Alyona Balaba, burned three St. George ribbons at the Eternal Flame.

And this is in Ukraine, which took upon itself the first powerful blow of Hitler's Wehrmacht, and this year marks the 70 anniversary of the liberation from fascism. In my deep conviction, these are not just acts of vandalism, but targeted attempts to erase the pride in our common Soviet Motherland that defeated Nazism. Pride is for heroes-pilots familiar to us from films like “Only old men go to battle”, pride for tankers who lay down their heads on the Kursk Bulge and for ordinary infantrymen who liberated Ukraine, and all of Europe at the same time.

The episode with the monuments is a small part of a big war for the minds of Ukrainians that has unfolded on television and social networks lately. In my opinion, blocking Russian TV channels indicates that the current government has felt that it is starting to lose this information war.

Hence the desire of the current government to lure the population from the Russian social networks Vkontakte and Odnoklassniki into homegrown like Druzi and Weua, where everything is on the move. I decided to see what these “correct” social networks for Ukrainians are fundamentally different from the usual. It turned out that nothing.

The interface is similar to VKontakte, likes are painted in the Ukrainian flag, you can put a cover on the page as on Facebook, and for photos you can rate it in Odnoklassniki. Moreover, during registration, it is proposed to choose a country from the list of former Soviet republics, but my friends from Russia said that their social network does not open. Communities there are mostly represented on the Maidan theme. In general, the instinct tells me that the project is a priori a failure, because it does not even focus on the whole of Ukraine, but only on its western part.

Nevertheless, such expensive projects are in demand and are preparing, as a rule, for some significant events. We have elections ahead, which means all these new Ukrainian social networks will become a free advertising platform for candidates from Maidan. I do not know who is behind their creation, but I wouldn’t be surprised if it turns out to be the very chocolate cardinal of the “5 channel” who plans to win the election. Such is the simple relationship between elections, cultural heritage sites and social networks for Ukrainians.