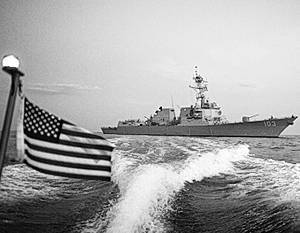 
Commenting on the statements of Russian Foreign Minister Sergei Lavrov, Laynez said that the US Navy is acting there in accordance with international law and soon intend to send another ship to the region, reports RIA "News».

As Lavrov said on Thursday, Moscow drew attention to the fact that the extension of the stay of US ships in the Black Sea often exceeded the deadlines set by the international convention of Montreux. According to him, the Montreux Convention introduces absolutely clear criteria limiting the location of naval vessels of foreign non-Black Sea states, both in terms of tonnage and duration of stay.

Lavrov drew attention to the fact that recently the United States naval ships extended their stay beyond the established deadlines a couple of times, and the extension did not always fit into those rules that exist within the framework of the convention.

“US Navy ships operate in the Black Sea in accordance with international law as part of normal practice. In the near future, we intend to send another ship there to participate in exercises and operations in order to improve interaction and increase readiness. This shows our commitment to working closely with allies and partners in the Black Sea region, aimed at strengthening maritime security and the capabilities of the naval forces, ”said Laynez.

The representative of the Pentagon did not specify which ship the US Navy is heading to the Black Sea. “We do not discuss in advance the specific details of the movement of ships. Further details will be announced at the appropriate time, ”she said.

Earlier, White House spokesman Josh Ernest reported that the US Navy extended the tenure of the Truxtun destroyer in the Black Sea. However, he noted that "there are additional resources that are sent to the Black Sea by the US Navy."

At the same time, Lavrov said that Moscow is calling on not to inflate the situation with the movement of military units in the Rostov region, where on March 31 the 15 battalion of the separate motorized infantry brigade of the Central Military District completed the field exit to the ground.

The minister also noted that Russia sent a request to NATO regarding plans to build up the alliance’s forces in the territories of Eastern European states. “Of course, we proceed from the fact that certain rules also apply in relations between Russia and NATO, including the Rome Declaration, including the basic act of the Russia-NATO Council, according to which there should not be a permanent military additional presence on the territory of Eastern European states”, - said Lavrov.

According to him, Russia expects from NATO "not just a response, but a response that will be fully based on respect for the rules agreed with us."