April 5 2014
25
In Turkey, the Justice and Development Party won in the March municipal elections 30, which received almost half of the votes. Neither a major corruption scandal, nor the resignation, nor the police purge, undertaken by Erdogan, nor the street protests that began because of the dark stories with Gezi Park, neither the Ergenekon case, nor the criticism of the authoritarian actions of the Turkish government by the West, nor excessive control over the Internet introduced by Erdogan - nothing prevented the unsinkable prime minister from winning. However, analysts say that Erdogan’s victory is not so impressive compared with the victories he won in the elections earlier. Actually, this is not even the victory of Erdogan, it is the victory of the party. The party, which now consists of a mass of opponents of the current Prime Minister. 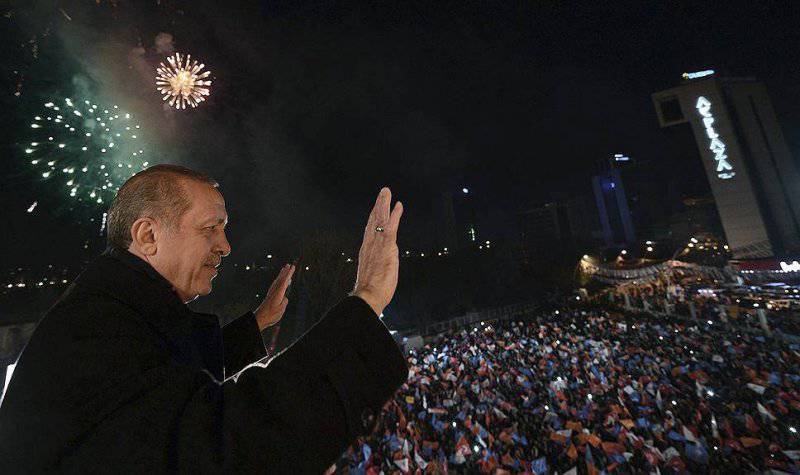 Turkish Prime Minister Erdogan announced the victory of his party in the local elections. Photo http://www.islam.ru

According to press reports, the AKP won elections in most of the districts of Turkey, gaining a total of 45% of votes. In Ankara and Istanbul, the party also “taxis”. And this is despite the fact that it was Erdogan who caused discontent among the people with his construction projects, purges in the army and police, and the ban on Twitter and YouTube. This is not to mention the corruption scandal in which the members of the government were implicated, as well as Erdogan himself and his son Bilal (two telephone conversations between them just hit the Internet).

It is the question of freedom of speech (in our time it can also be called freedom of the Internet) - one of the reasons for a serious split in the AKP. The official 21 ban of March on Twitter in Turkey was harshly criticized by the country's president, Abdullah Gul, previously considered the closest associate of Erdogan. According to the president, blocking Twitter is illegal.

Another crack in the AKP was after a corruption scandal. Approximately half of the party “disowned” from Erdogan and lined up under the banner of the Hizmet movement, led by the pro-Western (more precisely, pro-American) Fethullah Gülen, who now lives in the United States. R. T. Erdogan said about this influential person that he betrayed the interests of Turkey. According to the prime minister, the Turks will not "surrender to Pennsylvania and the arms stretching from there." Nevertheless, the resignation of 10 ministers, which Erdogan had to go after the corruption scandal, is a reflection of the split in the party and, if you will, the achievement of Gulen and the defeat of Erdogan.

Recep Tayyip Erdogan can today declare publicly his victory, and even that soon he will finally get rid of his opponents, but it seems that his victory cannot be called convincing, if only because the elections were generally municipal. People voted for local candidates from the party, and not at all for Erdogan. In Turkey, it is customary to identify the policy of the AKP with economic stability, and people still believe that Turkey will return to the road of this very stability, although today it’s not as good with the country's economy as it was several years ago - growth is not the same, and protests and stability scandals do not add. People know about the split in the AKP, and therefore, half of the votes cast for the candidates from the party, you can safely declare votes against Erdogan. The behavior of the premier is more like acting bravado. These elections, in essence, foreshadow his political decline.

Therefore, the headlines in the media with the words "Erdogan's triumph" seem frivolous or even biased.

It is imperative to take into account in the "victory" of Erdogan and the factor of the Internet. The blocking of unwanted resources before the elections allowed Erdogan to reduce the critical intensity in the society - in its own favor, of course. He made another move, such as taking into account the will of the people: Ankara 26 court in March adopted a resolution on unblocking the Twitter microblogging service. The trick is that the constitutional court delivered a confirming verdict right after the elections. So say after this that the branches of power in Turkey did not grow together into one strong bough ...

In August, the country will hold presidential elections, and, I suppose, Twitter and YouTube will again be locked up.

The well-known analyst El Murid strongly doubts the possibility of a future career for the prime minister. On ITAR-TASS His article was published, where he suggests that the Turkish Prime Minister has ceased to organize the United States.

Last year's protests on Taksim, the expert believes, remind the Ukrainian Maidan and Cairo Tahrir Square. And they became the last warning for Erdogan. That is why he closed social networks and websites: he broke the script of the “color revolution”. But, according to El Murid, events can be launched in the summer, in the presidential election. However, there are other opportunities to create problems for Erdogan - and also in the summer.

Recently, in the north of Syria, a group of militants, including foreign mercenaries, attacked an Armenian enclave with a center in Kessab. The massacre, the killing of prisoners, children, old people, the expulsion of the Armenians - everything, the analyst writes, was done with a challenge and “to the public”. Armenian diasporas are sounding the alarm. The worldwide movement #SaveKessab has already been created, and the Armenian public organization ANSA received a response from the US State Department, which condemned the actions of the militants. El Murid writes:

“In fact, Turkey can now be held accountable for mass slaughter, reminiscent of the Armenian genocide. Just because the attack came from its territory, with the help of its military. The Turkish army, not hiding too much, is supporting the militants, in particular, the recent incident with the downed Syrian aircraft occurred just in this area.

The problem of Erdogan is that he can simply be put before his fact by his military and special services, while the real customer of the operation may be those who now condemn it. That does not relieve him of responsibility for what is happening. "

The “operation” in Syria can be a provocation that will have unpleasant consequences for Erdogan: US senators and the State Department can investigate the massacre. Before the presidential elections in Turkey, the results of the investigation will be received. El Murid has no doubt that "Erdogan became displeased with the American authorities." And how “it will be cleaned depends only on those to whom it is entrusted.”

So, we are waiting for the August presidential election. Erdogan is aiming for the presidency and even counts on the support of the Kurds. True, the Kurdistan Workers Party after the elections of March 30 condemned falsification and theft of ballots, as well as the participation of military and civil servants in voting in Kurdish areas ...

Observed and commented on Oleg Chuvakin
- especially for topwar.ru
Ctrl Enter
Noticed oshЫbku Highlight text and press. Ctrl + Enter
We are
The attack on the Russian aircraft and the political situation in TurkeyErdogan’s failure, or “In the end, the Queen is responsible”
Military Reviewin Yandex News
Military Reviewin Google News
25 comments
Information
Dear reader, to leave comments on the publication, you must sign in.