Putin against the "principality of darkness" 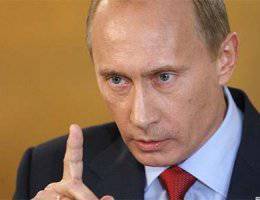 On the situation in Ukraine, the sharp turn of confrontation between Russia and the West and its consequences in responding to the questions of “Segodnya.ru”, the expert of the Institute of Information Wars Fyodor Pashin reflects.

- Your forecast for the results of the presidential elections in Ukraine: the possible winners, respectively, the status of Yanukovych ... Finally, how will the vote in the South-East?


- Elections, if they take place in May, will not bring the desired resolution of the situation in Ukraine. The formal, falsified winner, most likely, will be a representative of the current Kiev authorities, from among the appointees of the West. Among the candidates they make up the majority. Tsarev, Simonenko and Tigipko can make a very relative competition to them. However, their results will be significantly underestimated.

Dobkin, like the notorious mayor of Kharkov, deliberately or not, pour water on the mill of the “Kiev political mafia”.

Weak voter turnout in Novorossia will provide an opportunity to falsify the results in favor of “Kiev” nominees, proteges of the West.

Pro-Russian election statements of presidential candidates, including representatives of pro-Maidan forces, after the election will be thrown aside. The course towards further Ukrainization of the country, the ousting of the Russian and Russian-speaking population from Ukraine will continue.

In addition, by analogy with many Eastern European countries, external management will further increase in the country, and the process of reformatting the state structure in the economic interests of the West will begin.

The goal of this policy is not to regulate and stabilize the situation in Ukraine. External influence, as is known, does not provide for the creation of prerequisites for the revival of Ukraine, as a sovereign national state.

First, the Atlantic strategy in principle does not provide for the promotion of the development of sovereign statehood, and on a nationalist basis in a country with more than 40 million population. Moreover, for the United States and its NATO allies, this scenario represents one of the serious threats to their global domination.

Secondly, the Ukrainian factor is used today primarily to export the “revolution” to neighboring countries, primarily Russia and Belarus, to provoke permanent conflicts against Russia, to undermine the foundations of Russian statehood and to destabilize the situation throughout the post-Soviet space.

Thirdly, in order to avoid undesirable strengthening of the Ukrainian statehood and the revival of the country, the West intends to initiate the separation of the regions of Ukraine (Central, Western and South-Eastern parts, territorial enclaves around Odessa and in Transcarpathia). Western territories can go under the control of Poland. Odessa and adjacent regions, including Transnistria, are interesting for the United States, as a direct access to the Black Sea, Romania and Bulgaria. Transcarpathia is an important strategic transport hub, control over which allows you to actively influence the transportation of energy from the East to the West.

Managed destabilization of the situation in Ukraine against the background of destructive actions of essentially illegitimate authorities, deterioration of the socio-economic situation of the population, collapse of the real economy in industry and agriculture will inevitably threaten the national security of neighboring Russia and Belarus, which will force Moscow to react to the negative nature of developments. Russia simply will not have another way out.

- How to evaluate the speech of the President of Belarus in the show Savik Shuster and his meeting with Turchinov?

- The meeting of Schuster with the Belarusian president is not accidental. A well-known journalist who, naturally, is actively involved in plans to destabilize the situation in Ukraine, as previously in the Afghan war with the participation of the USSR, post-Soviet events in Russia, etc., set itself the goal of using the Alexander Lukashenko factor in the information war against Russia. And to a certain extent he succeeded. The name Turchinov here, too, is not coincidentally rattled to an interview with Lukashenko, who turns out to have already had conversations with him.

Nevertheless, the answers of the Belarusian president to the “Ukrainian” journalist are difficult to interpret unequivocally. Lukashenko "plays" not for Ukraine or for Russia, but, first of all, for himself, then the Republic of Belarus. The longer he remains in power, the more often he is forced to think about how to avoid the fate of Saddam Hussein, Slobodan Milosevic, Muammar Gaddafi and other national rulers who, having become disagreeable for the West, were ordered to live long. In this regard, the passage of Alexander Grigorievich is clear regarding the fact that Vladimir Putin can change him in the role of the “last dictator” of Europe. According to the Belarusian president, he even joked about this topic with the Russian leader, expressing the hope that the West will now leave him alone, spreading over Vladimir Putin.

However, Minsk today is not a joke. On the one hand, he is afraid of the fact that the opposition is using the experience of the Maidan to eliminate the Belarusian head of state from power. And then…

From another point of view, in Minsk they fear Russia, or rather Moscow - “Muscovites”. The actions of the Kremlin to reunite Crimea with Russia have already been recognized as classics of the use of “soft power” in a crisis situation. But not only for the possible invasion of Russian troops in neighboring countries are worried in Minsk. Lukashenko does not believe in this and convinces Schuster. More concerned about the prospects for the federalization of Ukraine. An experienced Belarusian president understands that in this case the prerequisites are created for strengthening the processes of attraction of the south-eastern territories to Russia. The same plan can be implemented in relation to the Republic of Belarus, where the western territories to Poland, and the eastern ones are not much different from the border regions of Russia.

And although the “Old Man” knows that if something happens, he, like Akayev, Yanukovych and other opponents of Russia, flee to Russia only in Russia, but he unequivocally criticizes Russia, but supports him very restrained.

However, the Belarusian leader can be understood, he is one of the few well-versed in what is actually happening now in the world and in Ukraine. For him there is no secret that the Ukrainian performance is played by the same diabolical force, whose representatives sit and rule not only in Washington, Berlin, and London. Their actions are conducted from a single center, directed by goals and objectives, place and time, forms and methods. In Moscow, these people sit in the government, waging an information war from Kiev against Russia, and from Moscow - against Ukraine, fueling Ukrainian-Russian contradictions, laying new awareness of mines in the public mind that will be torn for decades to come. They finance performances on the Ukrainian Maidan in Kiev, Kharkov, Odessa, etc., and at the same time mass protests in Moscow. These people know what they are doing. Everyone still remembers the times of total confrontation between two Germanies (Germany and the GDR) and two Vietnamese. Today, two Koreas are hostile to each other, the former Yugoslav republics do not get along with each other, Taiwan is contrasted with the PRC, etc.

- It’s time to ask about the enormous responsibility that fell on Putin’s shoulders and especially now manifested itself ...
The Russian president today is in a position somewhat similar to the Stalin era, although the positions of the “father of nations” were more stable, he owned many levers of government and society.

Putin's power is in many ways virtual, it is ensured by his ability to flexibly maneuver within the country and in the international arena, to position himself in the media space. Contradictions in the camp of the leading world clans (the Rothschilds, the Rockefellers, the Vatican, the Swiss Wiggles) and, as a result, disagreements between their representatives in Russia give the “master” of the Kremlin small chances to get out of the difficult situation with honor. Putin’s hands are supported by his high rating of support among the population. This circumstance in many respects restrains Russia's "sworn friends" from more decisive measures to eliminate the Russian leader from power and not only ...

But Russia is not Belarus. What “Old Man” could do, being kept for so many years in power, his Russian colleague may not be able to do. Russia has been too tamed by external forces since the times of Gorbachev-Yeltsin rule. But combining efforts will undoubtedly give a positive result. The soonest implementation of the project of the Union State of Belarus and Russia, in which Belarusian cadres will replace the agents of influence in the Russian corridors of power, is a good way out ... In such an alliance with the Slavic dominant, Ukraine will rather gather. Ukrainian roots “fathers”, which he learned more from the notorious protege of the West Yushchenko, in that can be his guarantee ...