“Many want to return to the Cold War” 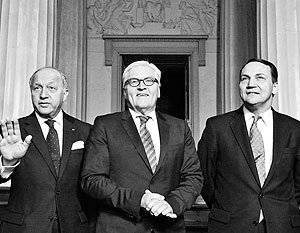 “I hope that negotiations with Moscow will urgently begin on the creation of a common free zone from the Atlantic to the Pacific Ocean. If at the same time Moscow also understands that Europeans are building the future of Europe with it, then problems around Ukraine will fade into the background, ”political analyst Alexander Rahr told VIEW VIEW, commenting on the recognition of Western diplomats in the fallacy of their policies towards Russia.

As the newspaper VIEW reported, the Russian Foreign Ministry on the eve responded to the decisions taken by the "Weimar Triangle" on Monday. According to Russian diplomats, “the initiative for Russia and the EU to negotiate with Ukraine, Moldova and Georgia“ regarding the consequences for all parties as a result of the signing of association agreements with the EU by the Eastern Partnership countries ”is particularly striking.

“That is, in fact, supported by the original Russian proposal, which was put forward as early as November of 2013 of the year and which was immediately rejected by the European Union. As they say, better late than never! But are they ready for this in Brussels and the aforementioned Eastern Partnership countries is a big question, ”the Foreign Ministry said.

Recall the countries - participants of the "Weimar Triangle": Germany, France and Poland - called for a renewed approach to the policy of the European Union towards its neighbors in the east, said Deutsche Welle on the eve. A joint statement by the foreign ministers of the three states: Frank-Walter Steinmeier Laurent Fabius and Radoslaw Sikorski, made on Monday in Weimar, states that Ukraine, Georgia, Moldova, Belarus and Azerbaijan should be allowed to work closely with both Western and Eastern partners and not to put them in the future before a tough choice - either an orientation towards the West or Russia.

Western diplomats who gathered in Weimar, moreover, directly admitted that they were underestimating Moscow’s possible reaction to an association agreement between the EU and Ukraine, and spoke in favor of rethinking their policies towards Russia.

In addition, as noted on Smolensk Square, the heads of diplomacy of France, Germany and Poland actually "confirmed the vitality of the main elements" of the Ukrainian agreement of February 21. “The ministers also remembered the catastrophic situation in the Ukrainian economy. Judging by the statement, our partners realize that without interaction with Russia, it will be extremely difficult to achieve a significant correction of the situation, ”the Foreign Ministry notes.

Alexander Rahr, scientific director of the German-Russian Forum, told the newspaper VZGLYAD about how far work in the West should go in the West.

VIEW: Alexander Glebovich, the “Weimar Triangle” assures that he did not expect from the Kremlin such a sharp reaction to the rapprochement between Ukraine and the EU. And why did they not expect it? 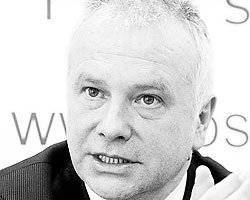 Aleksandr Rar: It’s worth seeing how the European Union’s Eastern Partnership was created in the last five years. The EU has aimed to bring Ukraine, Georgia, Armenia and even Belarus out of the influence of Russia, and Russia, in turn, in effect, will push Europe away from Europe. And very little was said within this European partnership about attempts or incentives to integrate Russia into the common European space.

We can say that we have completely forgotten about the dialogue with Russia over the creation of a common economic zone from Lisbon to Vladivostok. The EU’s stake was made only on associations with Ukraine, Georgia and so on, in order to make them closer to the EU - at the expense of their economic relations with Russia. This was a big mistake, but, unfortunately, not everyone in Europe understands this.

Now we need to make absolutely clear conclusions, recognize our own mistakes within the EU and correct this policy. It will not be easy. Because within the EU there are countries that say: “We have always known that Russia does not seek the EU, but only wants to have control over its zone of influence ...” There will be countries that will not speak for cooperation with Russia, but, on the contrary, even greater rigidity to it: the Scandinavian countries, Eastern Europe and England.

VIEW: Roughly speaking, on the one hand, there are “Euro-Russophobes”, on the other - pragmatists, business people?

AR: This is not a Russophobic approach; here we are talking about our own interests. There are countries within the European Union, such as Germany, which are able to imagine that together with Russia it is possible to stabilize the European continent. And there are countries that, not by their Russophobia, but by their historical experience, have always viewed Russia as a conqueror, as a country that needs to be feared. These are mainly neighbors of Russia, Eastern European countries. It is difficult to expect them to lead a constructive line. They always said that Russia needed to restrain, strengthen NATO and the EU, and advocated an association for Ukraine, Georgia, Armenia and others.

VIEW: The countries of the "Weimar Triangle" were in favor of rethinking their actions in relation to Russia. If they are revised, what will be the new set of methods?

AR: The Weimar Triangle countries made the right conclusion. But I do not understand why such an understanding in the EU could not have taken place a year ago, then we would have avoided many of the current conflicts.

I hope that negotiations with Moscow will urgently begin on the creation of a common free zone from the Atlantic to the Pacific Ocean. If at the same time Moscow also understands that Europeans are building the future of Europe with it, then the problems around Ukraine will go to the background. Because Russia, aimed not at China, but at Europe, will no longer oppose Ukraine’s seeking access to Europe.

Now the EU countries can come to the conclusion that it is time to look for a common language with Russia. But I do not exclude that there will be forces that will argue that Russia is an aggressor and it is necessary to build Europe without Russia. This key issue will be solved in one direction or another. The option that I fear is to strengthen NATO and the EU against Russia and return to the tools of the Cold War, when everyone held each other and held back the Soviet Union: “Now we will restrain Russia so that it does not attack us, so that it does not threaten us Such a psychology, I repeat, also takes place in the West.

These are two absolutely mutually exclusive positions. If Europeans show wisdom, they will take the first. But if they are led by current emotions, then there will be problems.

VIEW: Again, according to the Russian Foreign Ministry, the West realized that without interaction with Russia, it would be extremely difficult to achieve improvement in Ukraine. Does this mean that the West will openly ask the Kremlin for help soon?

AR: It is absolutely clear to every sober-minded person that Ukraine cannot financially stabilize, economically alone, neither the European Union nor Russia can. Looking for joint action. I think this is the only way out, but this is not all have come. Look at the decision of NATO, which now no longer wants to cooperate with Moscow ... So it's not so simple. There are enough forces in the West that still do not speak in one language.

VIEW: The countries of the “Weimar Triangle” now support the idea of ​​joint with Russia, that is, in a trilateral format, negotiations with Ukraine, Moldova and Georgia. Why did they change their mind? And will not other important EU members, for example, the United Kingdom, object?

AR: The countries of the Weimar Triangle made it necessary to change its mind sober assessment of the situation, understanding why Moscow acted in Ukraine, especially in the Crimea, so toughly that the economic interests of eastern Ukraine and Russia itself, which the West had no right to neglect, are behind this. And also the understanding that all these countries: Ukraine, Moldova, Georgia and so on - are so economically connected with Russia that it was impossible to put them before a choice - either or. It is good that such statements were made, let's see how they will be realized. It is very possible that the rest will object.

VIEW: According to the Ministry of Foreign Affairs of Russia, the “Weimar Triangle” actually “confirmed the vitality of the main elements” of the Kiev agreement of February 21. Why was he remembered just now?

AR: I can only assume that there are objective reasons for this - you first need to extinguish the fire that arose in Ukraine, to solve urgent economic problems.

From the February 21 agreement, no one ever refused. For Russia, it was necessary to realize one hundred percent and hold on to it, not to retreat anywhere. And in the West they said that it was violated by the situation itself: Yanukovych lost power, the Maidan stopped listening to opposition leaders and the situation didn’t really get out of control, but developed further. The contract may be outdated somewhere, but no one in the European Union says that it is wrong and you shouldn’t stick to it.

There are important elements that will sooner or later serve as the foundation for a settlement in Ukraine: for example, to connect the authorities of Eastern Ukraine to the country's government in order for a new executive authority to be recognized by everyone in the world, legal, and, of course, a change of constitution. All these measures are being discussed by Russia, Europeans, Americans, Ukrainians.

VIEW: How would you rate the statement of the authors of the British newspaper The Telegraph that Putin wins the psychological war by teaching the West a master class with his actions against Ukraine?

AR: Questions about who won, who lost, only add fuel to the fire. If we come to a reasonable understanding that we are responsible for strengthening Europe, for creating a common economic zone, if the crisis leads to the fact that finally the European Union or the Eurasian Union will create a common cooperation platform, if we understand that the threats to which we are - not inside Europe, but they are common to us - outside of Europe, then we will all win.

But many want to return to the Cold War, which may be convenient for them, because they make a career in the Cold War, there are such forces in all countries, including Russia. And if we go in the wake of these forces, then Europe will be split. In no case should this split be encouraged. It is necessary to search for the last exits from a very difficult situation.