“The sympathies of the western right belong to Russia” 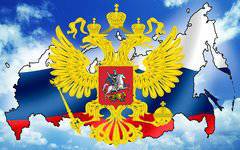 We must position ourselves as a European moderately right political force, the expert believes


Experts of the influential newspaper The Washington Post in the pages of the publication note Russia's ideological, economic and military might. According to them, the prospects of the Eurasian Union, which Moscow is building, look more favorable than those of the European Union, torn by contradictions. In addition, within Western Europe, Moscow has potential allies in the face of far-right organizations.

Is this really a reflection of a real change in Russia's role in the world or an expert bluff “for internal use”? We addressed this question to Mikhail Vitalyevich Remizov, President of the Institute of National Strategy.

The articles, where the potential of Russia is complimented, are divided into two categories. Some belong to the pen of alarmists, others are written by those who are skeptical about the project of the European Union and American foreign policy and, therefore, are sympathetic to Russia. Alarmists would like to additionally whip up their elites to resist the “growing threat”. These include, for example, lobbyists of the military-industrial complex, but both groups may coincide. However, this is not the main thing.

How justified is the assessment of an article in Washington Post? Yes, Russia's potential is not bad, not bad, and our foreign policy position. True, we do not fully utilize many of the advantages. We manage the resources with the simplest means: we simply sell the raw materials instead of using it for deep processing. We also did not fully use the transit factor, and we use very little the potential of import substitution, although it can grow for some time.

The Russian domestic market together with the countries of the Customs Union is quite voluminous. Despite the crisis, the level of consumption with us remains quite good. Scientific and technological potential, although it is residual, but it can be turned into something growing. Our human resource is also qualitative. In the state of American-Chinese bipolarity, Russia could afford to maneuver. Now the situation will get a little more complicated, because Western elites are now focusing more on the Kremlin.

We should value integration within the framework of the “customs troika”, but where is the perspective?

As for conservatism as an export ideology, it has a good potential. Indeed, the sympathies of the right in the West belong to Russia. If Moscow realizes this in time and begins to position itself as a European moderately right political force, then this can become a long-term factor of its influence. At the same time, we must forget that we were once loved by the left. It was a long time and not true. With rare exceptions, the leftists throughout the world negatively treated even the Soviet Union in the postwar period.

Not so much we have changed, how much left ideology has changed in the West. The factors of our “soft power” are on the right. This is a hundred percent! Only it must be understood that the right means those who profess conservative values, national sovereignty, and so on. That is, they are right in the western sense of the word.

But I would not overestimate the potential of the Eurasian Union. The Union "Russia - Belarus - Kazakhstan" is a success for all three states, but now there are no big prospects for its development. The inclusion of Kyrgyzstan, Tajikistan and Armenia, in my opinion, will weaken the Union. Such an expansion does not give strength to the union, but it can create problems and tension between its participants. We should value integration within the framework of the “customs troika”, but where is the perspective?