Alexander Turchinov. With such happiness and freedom ...

April 4 2014
159
The Kiev pseudo-government, it seems, is beginning to shift from a political language to the methods of self-styled healers and adverts. The month of the stay of the new “power” on the political olimps of Ukraine had barely caught up, as all potentials, except for inexhaustible verbal diarrhea, dried up. No one can do business, and does not want to - and initially could not and did not want to, but then exercise in delusional eloquence - as much as you like! Typical methods of charlatans, who try to cover their unprofessionalism and complete lack of understanding of the situation with loud words. At the same time, the process is becoming more and more similar to exercises on self-conviction - such mantras for themselves, in order to believe in their own viability, pushing into the background the fact of its complete absence.


This may explain another masterpiece from the self-proclaimed Ukrainian authorities, born on the TV show “Shuster Live”, which has become famous in Russia thanks to its nauseous disinformation flavor. The so-called Acting President of Ukraine Oleksandr Turchynov, as his mantra, repeated the following:

We will return to the Crimea.

Crimea will not be a peninsula of Russian military rest - it will be a terrible problem for Russia, which is already in international isolation. As Afghanistan led to the fall of the regime of the Russian Empire, so the Crimea will lead to the fall of Putin's regime.

Crimea was, is and will be Ukrainian land
. 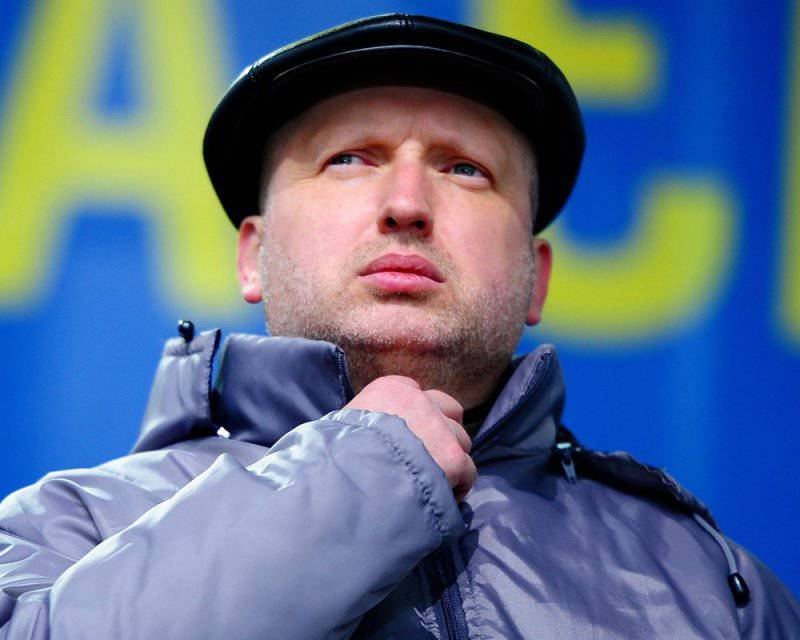 So, the gentleman with whom the Western "partners" persistently urge the Russian authorities to start a dialogue, uttered words that, in his personal conviction, are capable of scaring Vladimir Putin and, along with Putin, the whole of Russia.

Turchinov compares Crimea with Afghanistan ... After this, to be honest, you begin to doubt that Turchinov received his diploma at the Dnipropetrovsk Metallurgical Institute for knowledge and practical skills, and not some other merit. Well, it is impossible, in fact, to carry such a hopeless nonsense! Or does Mr. Turchinov have so much influence on his membership in the Baptist church, in which another person with unhealthy thought processes, Senator John McCain? I do not whether McCain whispered Turchinov that the Crimea should be turned to Russia for Afghanistan, clearly forgetting that more than 96% of those who voted on the peninsula spoke in a referendum for reunification with Russia. Clearly forgetting that almost 60% of Crimean residents are ethnic Russians. Obviously forgetting that the Crimea as a part of Ukraine turned out to be due to a big misunderstanding. Typical Afghan parallels, y'know ...

Well, ok McCain - in addition, from the Vietnamese captivity of the hemisphere they can’t get into place, but Turchinov is somewhere? .. Apparently, since he puffed out the smoke from tires on the Maidan, he cannot control himself, giving out the first, that sweeps through the skull box. And in fact, it seems that Turchinov himself believes in what he says. A typical "healer" who believed that he could "charge" water from the tap with the power of a word ... Charges amazingly:

According to international standards, international law, no legal agreement in these territories (on the territory of the Crimea peninsula - author's note) does not apply. Not a single decision of any judicial bodies is valid, not a single investment is legal. Those who do this will lose any prospect of moving around in civilized countries.

Bravo, Alexander Valentinovich! Bravissimo! The man who usurped several of Ukraine’s top political posts at once, using violent pressure on legitimate authorities from ultranationalists and radicals of other stripes, sees in himself the power to declare international standards, international law, judicial decisions and legal agreements.

We will have to remind Mr. Turchinov exactly what “legal agreements”, moral norms, and indeed aspects of the Criminal Code he himself violated, since he already managed, like a wildly crazed believer in his infallibility.

First: the illegal seizure of power in the country. Second: the illegal release of prisoners. Third: the illegal institution of criminal cases against judges of the Constitutional Court. Fourth: coverage of terrorists and other gangs using their official position. Fifth: the persecution of the media and journalists. Sixth: the connivance of the glorification of Nazism and fascism. Seventh: complicity in vandalism (tacit agreement with the demolition of monuments, arson stadiums, cultural centers, monuments stories and architecture). Eighth: the split of the country. Ninth: the prosecution of law enforcement officers and their families. Tenth: failure to fulfill economic obligations. Eleventh: communication with foreign agents of influence contrary to the interests of the people of Ukraine.

Only the first item is already pulling for life. And this person, who today sits in the chair of the “speaker” and “acting president” without a bit of legitimacy, and tomorrow will be sitting elsewhere, reflects on the fact that investing in Crimea is illegal, and all investors are almost not international criminals. Good goose! .. So decent people "dark" arrange to continue to think better about the "role" and "place."

By the way, in recent history there was already a gentleman who himself seized power on a wave of revolution — a revolution of roses, who himself broke all imaginable and inconceivable legal norms, covering the positions of peacekeepers with heavy fire from rocket launchers, and then pondering international law. He was also going to "burn the ground under the feet of the invaders." Where is this historical mistake of Georgia now? .. Recall: while it sits in the USA. But, considering the number of criminal cases with which the Georgian Prosecutor General’s Office is trying to communicate with him, it can be assumed that sooner or later Georgia will correct his mistake - he will send the ex-president to where he is supposed to be until the end of life, so as not to arouse people’s desire bring an end to your own hands ...

Obviously, even to Mr. Turchinov, when the shroud over Kiev dissipates, and when his mantras stop distracting the public’s attention from pressing problems, questions of the General Prosecutor’s Office will also arise. Whether it is because of one of the recent orders of the new Ukrainian "power" - to increase funding for the system of execution of punishments from the "reserves". It is necessary to prepare warm places today - to indulge in power for a long time is unlikely to succeed. As they say, with such happiness and freedom ...

Ctrl Enter
Noticed oshЫbku Highlight text and press. Ctrl + Enter
We are
Prime passion. Who will replace Yatsenyuk as prime minister of Ukraine?Schuster, Putin, Olympics-1936, Hitler and the appeals of the Ukrainian media for Russian objectivity
Military Reviewin Yandex News
Military Reviewin Google News
159 comments
Information
Dear reader, to leave comments on the publication, you must sign in.