The blockade of Transnistria: how the West hands of Moldova and Ukraine "arranges reservations in the center of Europe" 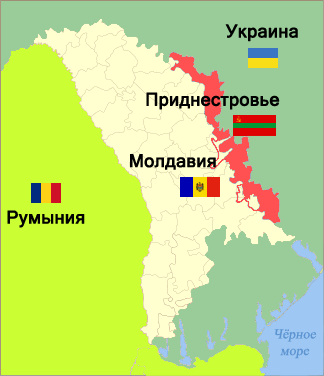 So, on March 31, the Security Service of Ukraine reported that it had stopped the "intelligence action directed against Ukraine by the State Security Committee of the PMR, directed against Ukraine." As a result of the special operation, they emphasize in the department, the counterintelligence of the Security Council of Ukraine detained S. Kuzmuk, a “hot” captain of the KGB of Transnistria, during his meeting with an agent - a citizen of Ukraine.

It is reported that the "spy" was trying to establish a channel of illegal supply weapons and ammunition from the territory of Transnistria to Ukraine in order to destabilize the socio-political situation and disrupt the election of the President of Ukraine; collected data on military units of the Armed Forces of Ukraine, their movement, state of readiness and means of the State Border Service.

The SBU notes that the “spy” himself confirmed his affiliation to the personnel of the KGB of the Transdnistrian Moldavian Republic and allegedly told them that the direct officer of the intelligence operation against Ukraine and the creation of a weapon supply channel were carried out by an officer of the Intelligence Department of the KGB of Transnistria.

After questioning the detainee, the SBU began the procedure for transferring it to the law enforcement agencies of Moldova, the report says.

The press service of the Transnistrian State Security Committee, in turn, informs that the border guard officer Captain S. Kuzmuk actually holds the position of senior border control shift at the Kamenka border checkpoint, whose function is to control the crossing of citizens and vehicles across the state border.

In the morning of March 30, 2014, S. Kuzmuk, in unscheduled time, voluntarily went to Ukraine to the settlement Peschanka to purchase kitchen furniture. Later, by telephone, he informed his relatives about the return, but so far has not returned. The ministry emphasizes that they do not have information about the whereabouts of the victim.

Pridnestrovian Foreign Minister Nina Shtanski called the recent events “a story sucked from the finger”, which is “performed in the spirit of espionage thrillers”. However, she added that the incident will only further complicate the relations of Transnistria with Ukraine.

In the last days of March, the PMR President Yevgeny Shevchuk gave an interview to a number of Russian media outlets, giving a detailed account of the current state of affairs, in particular with blocking.

“Transdniestria ... is in permanent blockades almost all the time of its existence. However, the blockade significantly increased in 2006, when the export of Transnistrian goods, the banking system, the ability to carry out freight and passenger transportation by its transport companies was actually blocked. Blocked river, air transport. Today, the situation has been aggravated by the fact that restrictive measures already apply to the freedom of movement of citizens. In particular, this applies to Russian citizens, men of military age. These restrictions are painful for us because there are about 200 thousands of Russian citizens living in Transnistria. ”

“It’s impossible to arrange a reservation in the center of Europe due to the fact that Transdniestrians have their own preferences and beliefs. The will of the people, the opinion of citizens living here must be respected. I believe that for Moldova and Transdniestria one of the best settlement options is the formula of civilized “divorce”.

"The Ukrainian border is now utterly fortified ... There are troops, the border crossing regime has been changed for Russian citizens." The Transnistrian republic is forced to send goods only through Moldova with payment of the relevant procedures. “Moldovan authorities have unilaterally changed tax legislation. They decided on taxes, in particular on excises. The negotiations promised that these decisions will change. Unfortunately, such decisions have not yet been made. And we offer our partners to postpone the negotiations for a certain period of time in order to see how Moldova will act. To negotiate just for the sake of negotiations in the context of economic suffocation, I believe, is inappropriate. ”

Shevchuk described the situation around the PMR as a full-fledged economic blockade.

March 31 held a telephone conversation between Russian President Vladimir Putin and the Federal Chancellor of Germany Angela Merkel. According to the Kremlin’s press service, “when exchanging views on Transnistria, the Russian leader spoke of the need to take effective measures aimed at lifting the actual external blockade of the region and searching for a fair and comprehensive solution to the Transnistrian problem.”

In connection with the current state of affairs, the Transnistrian side hinted quite transparently that it was ready to withdraw from the settlement negotiations in the 5 + 2 format (Transdniestria and Moldova are parties; Russia, Ukraine and the OSCE are guarantors, the EU and the US are observers). The next round is scheduled for April 10 – 11 in Vienna.

As 1 of April was announced by Transnistrian Foreign Minister Nina Shtanski, the Moldovan and Ukrainian side tried to convince Transnistrian negotiators of the absence of an actual blockade of Transnistria. According to her, "sometimes it seems that we are in different realities and operate with completely different information."

The condition of Tiraspol is the following: as soon as Moldova lifts the blockade, adopting a law on the abolition of the excise, the main obstacle for the participation of Transnistria in the April round of negotiations will be eliminated.

Ctrl Enter
Noticed oshЫbku Highlight text and press. Ctrl + Enter
We are
The action “Military service under the contract is your choice!” In Rostov-on-Don: future contract servicemen, exhibitions and “Russian Knights”Armed Forces of Transnistria: 23 of the year since its foundation
Military Reviewin Yandex News
Military Reviewin Google News
33 comments
Information
Dear reader, to leave comments on the publication, you must sign in.