Memorial plaques were destroyed in Sumy and threatened the clergy 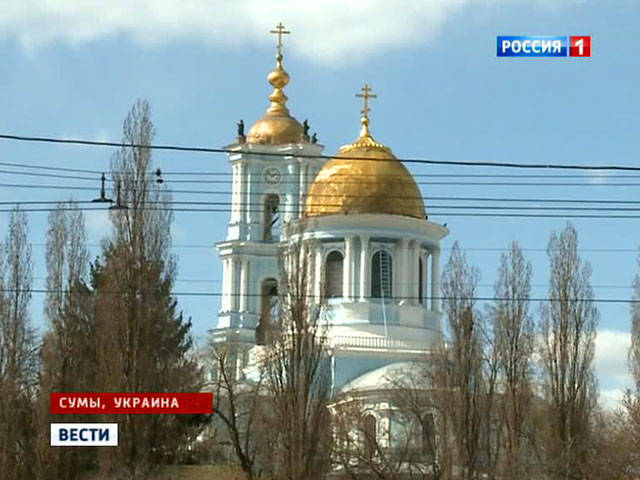 In the city of Sumy, in the north-east of Ukraine, unknown persons smashed plaques installed in honor of outstanding citizens of Sumy region. This is not the first act of vandalism, which is organized by extremists in Ukrainian cities. And now, when the account of the defiled monuments went to dozens, the radicals chose a new sacrifice - the Ukrainian Orthodox Church. 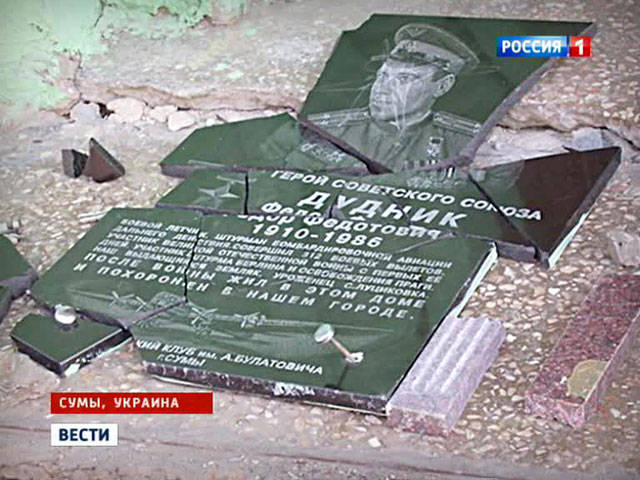 Local residents made memorial plates with their own money, because they believed that the city should know its heroes. Suren Kaftaryan - historian, was the first doctor of science in Sumy region. A military pilot Fyodor Dudnik fought at the Kursk Bulge at the helm of a bomber, defended both Moscow and Kiev. At night, the intruders smashed the marble slabs on the house where these people lived, and then they helped them. 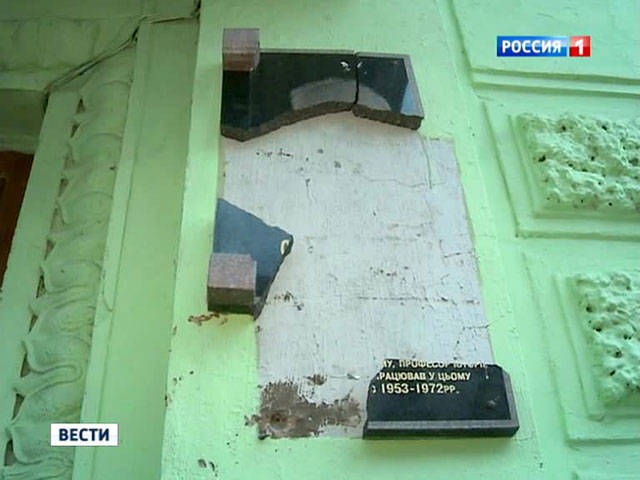 "This is a desecration of the memory of the Great Victory," said Sergei Negovsky, chairman of the regional historical club named after Bulatovich. "This is a spittle in the face of the veterans who survived."

Irina Egorova and the Hero of the Soviet Union Fyodor Dudnik have long been neighbors and friends. Irina Konstantinovna - 93, in the years of the Great Patriotic War, a surgeon of the field hospital, on the ceremonial jacket - dozens of awards, including "For the capture of Berlin". There is her autograph on the Reichstag wall.

“I cannot imagine such blasphemy as a participant in a war of hostilities,” says the woman. “How did we live to see such a thing ?!”
Not so long ago, the Red Army soldiers and the Eternal Flame were desecrated here and covered with garbage. And all this happens in the year of the 70 anniversary of the liberation of Ukraine from the Nazis.

The portrait of Fyodor Dudnik is also on the Walk of Fame. Total here - 39 heroes. Ivan Sadovsky received this title for crossing the Dnieper in October 1943, and a year later he was killed in battle. The commander of the reconnaissance group, Pavel Sagaydachny, was wounded nine times, wounded three times. He fought on four fronts. But those who now defile memorials in Ukraine probably remember only their heroes — the heroes of Maidan.

At the end of February, representatives of the so-called Kyiv Patriarchate, a non-canonical church that emerged in 1992, decided to take the revolutionary Transfiguration Cathedral in Sumy, where there are so many Orthodox shrines - particles of the relics of John the Baptist, St. George and St. Matron. The main claim of uninvited guests: they say, in the temple they do not pray for "heroes of the heavenly hundreds." To this they were told that they commemorate all those killed on the Maidan, whether they are supporters of European integration or fighters of the "Berkut".

At the end of the conversation, the envoys of Maidan threatened to shower the cathedral with Molotov cocktails. Father Innokentii had to remove his cradle, put on his berets and stand up to defend the temple, when the Right Sector militants began to stick to its walls. The church was able to defend only due to the fact that the call-up bell alarm bell, which sounded to the whole district, came and hundreds of parishioners stood with a human shield. But the pressure on the Sumy clergy is not weakened.

“I, for example, know priests who are forced to go to a military unit and serve a prayer for the blessing of the Ukrainian army to war with Russia,” said hieromonk Innokenty Ivlev. “But the fathers refuse. They say how? Why we should bless our soldiers so that they fought with your brothers? "

In Odessa, the persecution of clergymen has already begun. Archpriest Oleg Mokryak, in whose house the SBU officers searched the house, turns out to be "threatening the national security of Ukraine."

Cossacks patrol the streets in Sumy - both during the day and especially at night, when blasphemous actions occur most often. “Abominations are taking place in the city,” says Sergey Kondratenko, ataman of the Sumy regiment of the Slobodskiy Cossacks. “Unknown people walk around, quietly smash boards, and fill monuments with garbage.”

How far Maidan will go in its fight against the totalitarian legacy - one can only guess. In the Lviv region have demolished a monument to a Soviet soldier with a child in her arms. But why, for example, did not please Prince Mikhail Kutuzov? In the town of Brody, near Lvov, the bust of the field marshal was overthrown from the pedestal, they are planning to replace either with someone from the "heavenly hundred" or Stepan Bandera.