Ukraine is waiting for a new "Crimea" 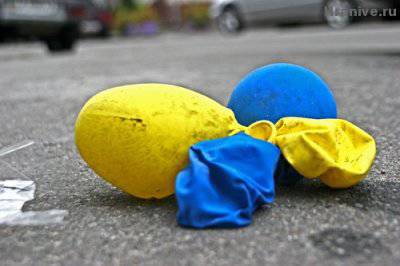 Scott Ricard, a former NSA official, said in an interview the other day that the CIA did not expect Russia to respond so quickly to a coup d'état committed by the United States in Kiev in Crimea. In fact, no one expected this, except for a few dedicated ones. But therefore, and what will happen next, we can assume today too few people expect.


With the reunification of the Crimea with Russia, a new political reality emerged. The United States and its NATO vassals reject it, cling to the old world under their control, for the argument of “the annexation of Crimea by Russia,” but it is beating time and again with “reality”: all attempts to “put Russia in its place” fail. The active participation of the United States in the neo-fascist, Bandera coup in Kiev, and in the annexation of the whole country under the guise of the coming to power of its puppets, will, sooner or later, become public. The Crimean referendum will bury the myth of American exclusivity and democracy.

In the "new reality", after the "Crimea", Russia's attitude to the new Bandera Ukraine will change dramatically. Previously, the predominantly Russian Crimea was, in fact, held hostage by a nationalist Kiev, and Moscow had, reluctantly, to endure Bandera’s glorification, and generally the West to raise pro-fascist, Russophobic sentiments in Ukraine. The Crimea held Moscow back, but now the Crimean splinter has been torn out of the body of Russia!

Therefore, Russia's policy towards Ukraine will apparently change to the opposite. If, prior to Crimea, Russia worked with any current Ukrainian government, not trying to influence the social situation with “soft power”, as the West did, now everything will be exactly the opposite: a minimum of relations with Kiev, and a maximum with Ukrainian society.

Russia will not have normal relations with Bandera Ukraine. Most likely, there will be no relationship at all: with Saakashvilevskaya Georgia, there was no relationship, practically. Georgia then got out of the situation at the expense of Western aid, but Ukraine is somewhat larger than Georgia, and its help from the West will not save: any help will be scarce!

The independent candidate for the presidency of Ukraine, businessman Rabinovich, went to participate in the elections, it seems, only to repeat this commonplaceness: without normal relations with Russia, Ukraine is “kirdyk”, therefore, even “with tears in his eyes”, it is necessary to agree somehow with Russia. Candidates from the south-east of Ukraine, Mikhail Dobkin and Oleg Tsarev, say the same thing: “Return good relations with Russia”.

Russia's requirements for Ukraine are known: the federalization and autonomy of Russian-speaking regions, the state status of the Russian language, the ban on extremist organizations. Kiev does not hear this, and speaks of the "seizure of the Crimea", of the "war with Russia." Well, that's his choice ...

Bandera Kiev does not understand, or does not want to understand, that Russia will not back down from its demands. Presidential candidates Poroshenko-Tymoshenko, are talking about building a nationalist state. Tymoshenko agreed even before the genocide: "soak the bloody Katsap, and their leader."

What remains of this situation in Russia? Do what she does. Helmut Schmidt, the ex-chancellor of Germany, already an old man, can afford to tell the truth: "The West in the place of Russia would act the same way today."

Ctrl Enter
Noticed oshЫbku Highlight text and press. Ctrl + Enter
We are
Russia, Turkey and the "Crimean Question"Results of the week. “And the Crimea of ​​the Fatherland is sweet and pleasant for us!”
Military Reviewin Yandex News
Military Reviewin Google News
190 comments
Information
Dear reader, to leave comments on the publication, you must sign in.