Not at all funny "laughter day" 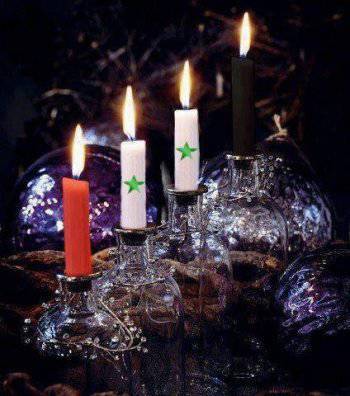 The traditional "April Fool's Day" in Syria April 1 was not at all a fun day. The terrorists stepped up their crimes against the inhabitants of Damascus and other cities in the country.


The morning began with the fact that I called my friend, and she said that she had just taken her son from school - the building was shelled by terrorists. Many parents experienced a real shock, and the children were scared. A mortar round hit the Jawdat Al-Hashemi school in the At-Tajhis metropolitan area, only miraculously did not kill the lives of the children, but two students were injured.

All day — from morning until late evening — there was no electricity in Damascus. Worked only generators. The terrorists staged another major sabotage against the power grid.

And throughout the day, shells exploded. In the Christian quarter of Al-Kassa, gangsters fired on a garment factory with mortars. One of the employees of the company died, three were injured.

Great damage was caused as a result of the shelling of the Abbasiin Square, which has been subjected to similar crimes more than once.

In the suburbs of Damascus Haraste, not far from the hospital - another favorite target of the militants - the mortar shell also exploded. He got into a passing passenger bus. One person was injured.

In Hasakla province, an explosive device was activated in the town of Al-Kamyshly on Merkaz al-Sakafi Street. Two people suffered.
In the province of Homs, in the village of Jub al-Jarrah, two women and a man were wounded by mortar shells of terrorists. The village of Abu Al-Alayyah was also fired, fortunately, there were no casualties, but the houses were damaged.

In northern Syria, in the town of Idleb in the Al-Kusur quarter, as a result of a mortar attack, one civilian was killed, 14 suffered.

In the city of Aleppo, a similar shelling of An-Nil and Al-Mukambo streets killed 5 people. 26 were injured, some hard.

In addition, the militants attempted to penetrate into the area of ​​Barakat Al-Arman. Fortunately, the military disrupted this attack by eliminating the attackers.

The Syrian army continues special operations against Islamists and mercenaries. In the province of Homs, in the village of Al-Hosn, recently cleared of bandits, a large underground workshop was found, where criminals made "hellish machines". There were many ready-made bombs, as well as explosives and blanks.

23 terrorist from the quarters of the old city of Homs chose to surrender to the authorities. According to official data, since 26 March, the 102 militant has already been laid down from this area. weapon.

In the province of Idleb in the villages of Maaret Kafrin and Taftanaz, the military attacked the columns of terrorist vehicles. All the militants who were there, eliminated.

In the province of Suweida, the security forces intercepted a jeep in which there was a load of narcotic pills that members of armed groups use to "raise morale". 126 thousand tablets are confiscated.

In the meantime, the anti-Syrian forces, unwilling to admit their defeat, continue to harbor barbaric, criminal plans. After intercepting a telephone conversation with the participation of the Turkish Foreign Minister, who was discussing the shelling of Turkey’s territory with dispatched agents in order to then invade the SAR, the Syrian special services managed to intercept another conversation, from which it is possible another major provocation.

As the Permanent Representative of Syria to the UN, Bashar Al-Jafari, said in an interview with the Russia Today TV channel, law enforcement agencies intercepted a radio broadcast, where two militants in the Dzhobar district of Damascus talked. It was about the next chemical attack, which is then planned to blame the government. A terrorist named Abu Jihad says to his interlocutor that poisonous gas will be used, and it is necessary to supply all the militants operating in the area with gas masks.

Al-Jafari reported that on March 25 messages were sent to the UN Secretary General and the Chairman of the UN Security Council on this issue.

He recalled that he had informed the UN of the fact that the terrorist Hayssam Salah-ed-Din Kassab had bought such chemicals as white phosphorus and isopropyl from a Turkish company. According to some reports, these substances have already been brought to the territory of Syria for the commission of another chemical provocation.

The Syrian diplomat touched upon such topics as the situation around the city of Kasab in the province of Latakia. He said that Syria has already sent five messages to the UN with evidence of the involvement of the Turkish government in the attack on this city.

It should be noted that at a time when the Turkish regime is engaged in “implanting democracy” in Syria, the police disperse opposition demonstrations in the most severe way in Turkey. At the same time in the course are water cannons and tear gas. Many people came out to protest at the building of the Electoral Commission, protesting against the possible falsification of municipal elections. They chanted: "Erdogan is a thief." Of course, Erdogan found only one answer to this accusation - violence. What is in relation to Syria, that in relation to his own people, he uses the same methods.

At this time, Russian politicians made some rather tough statements regarding anti-Syrian plans. Russian Defense Minister Sergei Shoigu warned against plans to intervene in Syria, which threatens to catastrophe for the entire region. Speaking at a meeting of the heads of military departments of the SCO countries, he condemned the actions of the West and the monarchies of the Arab world, which provide military assistance to terrorists. It is because of such support, he said, that the situation in the SAR remains tense. Shoigu also recalled the tragic consequences of NATO intervention in Libya.

Deputy Foreign Minister Gennady Gatilov urged to thoroughly investigate information about the massacre of the residents of the city of Kasab by militants and bring the matter to the UN Security Council.

Thus, all the rumors that Russia allegedly “exchanged Crimea for Syria” are not confirmed. On the contrary, Russia is becoming only stronger, and with it the entire front of resistance to the dictates of the United States and the West is growing stronger. With each step, the world is moving away from the era of unipolarity, when Washington dictated its conditions to everyone.

It is a pity that the policy of the United States and its allies continues to claim the lives and health of innocent people.