Russia wants to buy Mistral with all the dowry 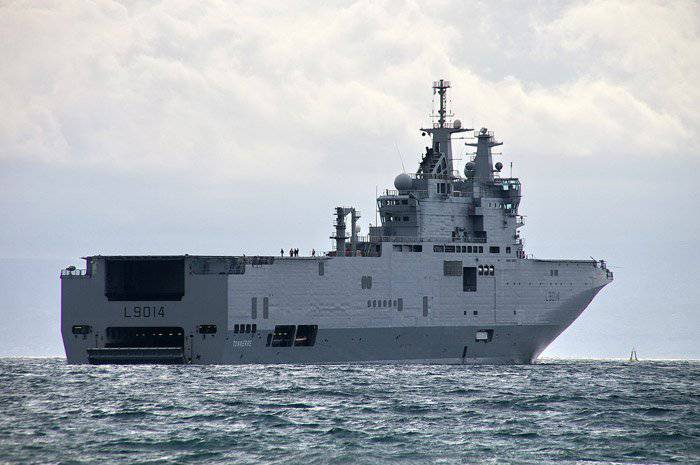 The agreement with the French on the supply of components for the Russian helicopter carrier "Mistral" reached.

According to the requirements of the Russians, "Mistral" will provide the latest electronics and other modern equipment. On Wednesday, the press secretary of the Russian Defense Ministry announced the signing of a joint agreement with the French, where the needs of the Russian Navy were clarified. In parallel, experts explained the importance of this transaction.
The agreement reached in these negotiations clarifies the needs of Russian sailors, according to which the Mistrals will be built. This information was obtained from an official source of the Ministry of Defense.

"Mistral" should go in one set with all the electronics provided on the ship, spare parts and a set of all necessary tools with all additions to them. This also included the requirement for the delivery of documentation on the management of ships. Together with the points listed above, it is indicated that everything necessary for the construction of two airborne helicopter-docks is brought in one of the ports of Russia, including equipment and assistance in construction. This also includes the delivery of documentation on the working operation and a detailed description of all the individual parts of the docks.

Despite the fact that the Mistral contract for supplying the French side, according to which it is planned to deliver this type of ships before 30 on April 2011, is not fully ready, its initial stage is proceeding as planned. At this stage, the contract is in a state of negotiation process.

At the beginning of the negotiation process, the Russians put forward the fundamental requirements of the French side to fully recruit ships of this type, including French electronics, including the control system. At the same time, the French side was rather reluctant to show a desire to meet such requirements. To which the Russian side noted that the Mistral itself interested them primarily because of its technologies and capabilities, allowing their further development on Russian warships.
According to the source, such requirements on the part of Russian specialists were indicated from the very beginning. As shown by a detailed analysis of the primary data on these ships, the Mistral has a great technological reserve both in shipbuilding and in the ability to control diverse naval forces. It was in this that the fundamental moment was seen, since the Mistral was planned to be included fleet not only as a helicopter carrier ship, but also as a ship controlling versatile forces.

As is known, the situation with the purchase of two Mistrals by Russia has been developing for three years already, but it is not yet possible to boast a complete agreement. Many obstacles lie in the price of ships, in the supply of components and, in general, in providing the Russian side with all the possibilities for management and maintenance. Without the provision of all technologies, the purchase of these ships completely loses its meaning. The development and access of the fleet to a qualitatively new level in the country's defense capability will only allow the complete staffing of this type of ships. 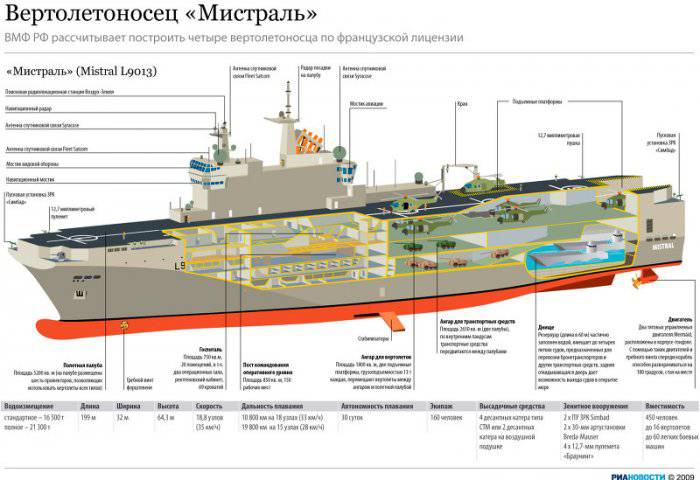 As the source from the Ministry of Defense and the presidential administration showed, the original contract did not provide for a complete set of modern management and communication facilities. The agreement also did not envisage the construction of two ships of this type in Russia and the training of crews with the full sale of shipbuilding technology management.

This was the reason for the spread of rumors about the failure of this transaction, and the information provided on Wednesday had the goal of discrediting all doubts. So, earlier in some newspapers articles were published, indicating the failure of this transaction for the reasons that the Russian side from the very beginning was put by the French at unprofitable conditions for acquiring ship components.

At the same time, it became known that the Baltic Sea countries did not hide their joy from rumors about the occurrence of unachieved agreements. These countries initially reacted to this contract with a high degree of mistrust and concern. The Baltic countries, Estonia, Lithuania and Latvia, did not particularly like the fact that they expressed dissatisfaction with the fact that during the conclusion of such agreements their opinion was not only ignored, but was not even taken into account from the very beginning. Thus, they do not hide the joy of the occurrence of contradictions. Thus, for example, the Latvian Foreign Ministry expressed the opinion that such an agreement should be discussed according to a “common security policy” involving such organizations as the EU and NATO. It got to the point that French President Nicolas Sarkozy personally sent his ambassadors to these countries with the mission of "appeasement."

Thus, once again there is a “leak of information” about these negotiations. This year there have already been new interpretations about these negotiations. So, one of the authoritative political publications of the country in March published data according to which the French gathered to increase the value of both the ships themselves and the deals in general. Initially, according to the agreement, both Mistral were going to sell for 980 million euros. Now their value has increased to 1 billion. 240 million euros. Such a turn of events, as the newspaper notes, was caused by a “non-professional approach” to the conclusion of a contract by the Russian Ministry of Defense, from which Deputy Admiral Nikolai Borisov was nominated for signing a contract. It is pointed out that Borisov signed a contract for a total amount of 1,15 billion euros, which the French side did not like.

Over time, the French made new demands on the price of the contract due to the fact that the Russian side is constantly making additional requirements and changes to the design of both ships.

We remind you that the contract itself on the construction of two Mistral landing ships by France for Russia was signed on 25 in January of 2011. Russian Deputy Prime Minister Igor Sechin came to the signing from the Russian side, French Minister Alain Juppe himself arrived from the French side.

Upon signing the contract, it was announced that the joint production of the Russian United Shipbuilding Corporation (USC) and the French DCNS would be built by the ships. The construction itself will be carried out in the French San Nazaire, after which, according to the license, two more ships of this type will be built in Russia. According to the president of the Russian construction organization, Nikolai Trotsenko, the price of each of these ships will not exceed 600 million euros.

Such a contract, according to Trotsenko, will finally allow fully renewing and adjusting the newly launched Russian shipbuilding and bringing it to a new level. Localization of the first ship will be up to 20%, the second - up to 40%, the third - 60%, when the fourth one is built, localization should reach 80%.

The first two ships built already decided to send to the Far East. It’s not known yet where the two Mistrals will go.