Forever twenty. 90 anniversary of the birth of a sniper Rosa Shanina

April 3 2014
23
Exactly 90 years ago, 3 on April 1924, Rosa Yegorovna Shanina, participant of the Great Patriotic War, Soviet solo sniper was born. Rose Shanina became the first woman - the knight of the Order of Glory. She fought on the front for less than a year, but managed to write into her account 59 confirmed confirmed soldiers and officers of the Wehrmacht, among whom were enemy's 12 snipers. Also on the account of the girl with the "flower" name were three captured by the Nazis. Rosa Shanina died 28 on January 1945 of the year during the East Prussian offensive operation, not having time to celebrate 21's birthday.


The most important qualities for a sniper - patience, observation, the ability to wait, as well as accurately perform all the tasks. Very often, snipers had to lie in their shelter for several hours without movement in any weather. At that time, it was believed that such patience is peculiar only to women. Therefore, a lot of female snipers fought on the fronts of the Great Patriotic War. In the USSR, training of female snipers was launched quite actively, special schools were established in the country. Women between the ages of 16 and 45 have won the right to go to the front in February of 1942. At that time, it was believed that women are more flexible limbs, better plasticity, they have more cunning and perseverance, besides, they tolerate cold and stress better. All this is the best suited for snipers.

Rosa Shanina was born in the Arkhangelsk region in the small village of Edma (at the time of birth it was Velsk district of the Vologda province), in a large peasant family. Her father, Yegor Mikhailovich, worked in logging, and her mother worked as a milkmaid in a local collective farm. Roza was named after the famous revolutionary Rosa Luxemburg, she had four siblings (Mikhail, Fyodor, Sergey and Marat), and her family raised three orphans. Of the five native children of the Shanins, who went to the front, only one Marat returned home alive. 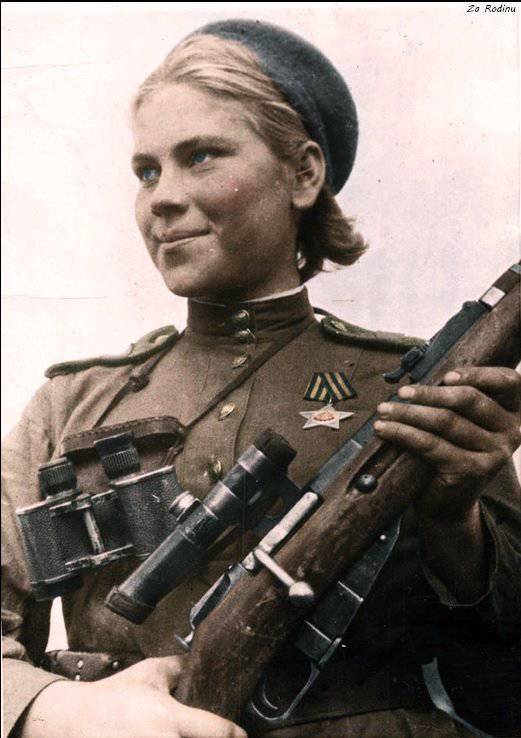 After graduating from high school 7, at the age of 14 for years, against the wishes of her parents, Rosa left for Arkhangelsk, while she traveled to the nearest railway station 200 kilometers through the taiga. In Arkhangelsk, she enrolled in a local pedagogical school. At that time, she practically had neither money nor her property. Before enrolling in a student dormitory, she temporarily lived with her older brother. Soon Arkhangelsk became her hometown for her. Later, she spoke very warmly of him in his diary, which led during the war.

In 1938, Rosa joined the Komsomol. In 1940, tuition fees were introduced in the USSR, after which the girl began to miss the scholarships and financial assistance that her parents sent her. Therefore, she was forced to get a job in kindergarten №2 of the Pervomaisky district education department, she was provided with housing at the kindergarten. The young teacher was appreciated by parents and children. In 1942, she successfully graduated from the Pedagogical School.

When World War II began, Rosa was just 17 years old. Her three brothers went to the front and died at the very beginning of the war, in its most terrible part. In 1942, the USSR allowed girls to be called up for military service. In 1943, Rosa Sheina independently came to the draft board to volunteer for the front. After she passed the universal training, the girl was sent to Podolsk, where the Central Women's School of Snipers was located at that moment. Here she met with future front-line friends Kaleria Petrova and Alexandra Evdokimova. Only Petrova returned home from the war. Rosa graduated from a sniper school with honors, and 1 on April 1944 was sent to the front as part of a female sniper platoon. 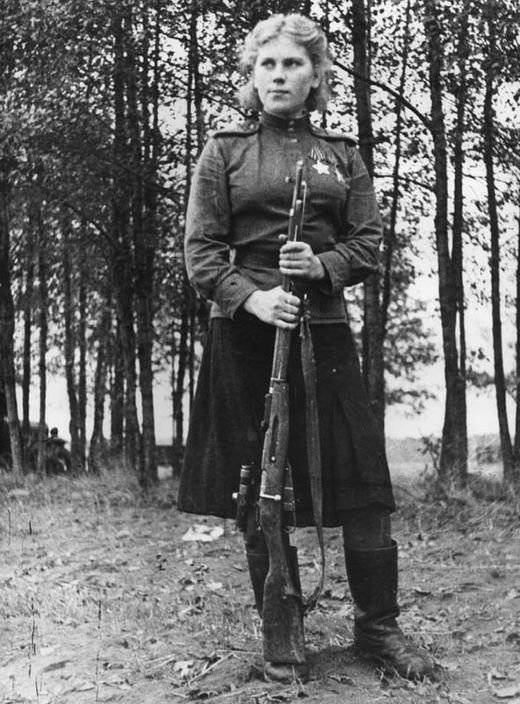 Rosa Shanina scored 59 killed soldiers and officers of the Nazi army, 12 of whom were snipers. According to others, the number of Hitlerites killed by her could be 75 people. Especially emphasized her ability to effectively shoot at moving targets. Shaninu fell in love with the media, and not only in the Soviet. Allied newspapers called Roza Shanin "the invisible horror of East Prussia." Soviet magazines and newspapers printed photos of a girl sniper with a charming smile.

A separate sniper platoon operated as part of the 184th Infantry Division. Already on April 18, 1944, for the heroism that Rosa Shanina showed during the battle for the village of Kozi Gora (Smolensk region), she was awarded the Order of Glory of the III degree. According to the report of the regiment commander Major Degtyarev, only in the period from April 6 to 11 weapons and enemy artillery fire destroyed 13 Nazis. By May 1944, there were already 17 enemy soldiers and officers on the account of the sniper girl. Soon after, she was even appointed platoon commander, and the military newspaper “Destroy the Enemy” placed her portrait on the front page in her next issue.

22 June 1944 began the famous counteroffensive of the Soviet troops in Belarus - Operation Bagration. The platoon in which she served Shanin had to attack in the second echelon in order not to risk in vain the lives of the girls snipers. At the same time, during 1,5 of the month of previous battles, the girls were very tired, they were ordered to rest as much as possible, to use any halts and not to join the combat operations of the infantry detachments. Shanina violated this order, seeking from the command of sending it to the front line - in reconnaissance or rifle battalion. Between 26 and 28 June 1944, Rosa lagged behind her unit during the halt and followed the battalion, which was going to the front line. 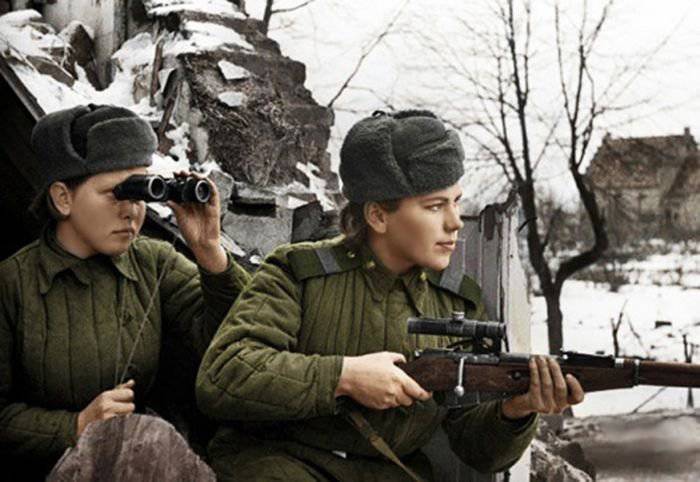 Having violated the direct order of the command, Rosa Shanina took part in the battles to eliminate the group of Germans surrounded in the Vitebsk region. In these battles, she captured 3's German soldiers. For failure to comply with the order of the higher command, she was even subjected to Komsomol punishment, but they did not punish her more seriously. In the future, when Rosa was awarded the Order of Glory II degree (September 16 1944), among her other military achievements were these three prisoners of war, whom she captured during the "AWOL". After the division commander sent a sniper to the rear, Rosa personally appealed to 5 Army commander Nikolai Krylov, who officially allowed her to serve at the front line.

Despite the front ban, Rosa kept a personal diary, where she recorded her thoughts and impressions. Thanks to this diary, it subsequently became very popular in the USSR. In the diary, the girl was genuinely surprised at her popularity. She thought it strange that the magazine “Ogonek” placed her portrait on the first page, and that in the newspaper “Destroy the Enemy” she was called the best sniper. The girl herself wrote in her diary that it was strange for her to imagine how those whom she knew looked at illustrations with her in Soviet newspapers and magazines, and believed that she had done quite a bit more. However, she did not know that much was written about her in the Western press. In 1944-1945, American and Canadian newspapers wrote a lot about Rosa Shanina. 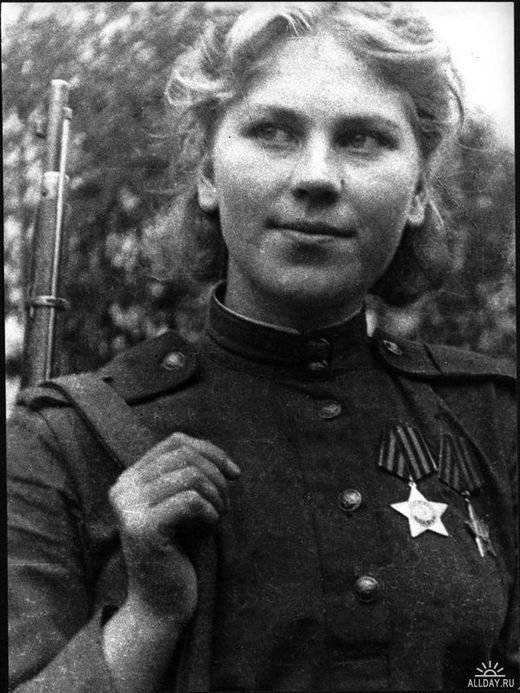 13 December 1944, Rosa Shanina, was shot in the shoulder. In the diary, a brave girl wrote that she practically did not feel pain and did not want to leave the front edge of the defense. At the same time, she again turned to her merits, noting that she considered them only the share of participation that every citizen of the country should contribute to the victory in the war. She never recognized herself as a hero, although she wrote so about her wounded and dead fighting friends.

In January, 1945, the entries in Rosa Shanina’s diary become pronouncedly sad. In one of her last letters, she asks her friends to send her mother a farewell letter in case of death. At that time, she participated in bloody battles on the territory of East Prussia, seeing whole battalions die in a bloody meat grinder on the front. In late January, in one of the battles, she tried to cover up the wounded commander of an artillery unit with fire, and she herself was seriously wounded in the chest. On January 28, she was still alive and was taken to a field hospital, but the injury was fatal. Rosa Shanina did not live a little more than a month before her 21 anniversary and several months before the end of the war.

The character of Rosa can be judged by the reviews of her close friend from Arkhangelsk Maria Makarova. Maria recalled Rosa Shanina as a responsive and kind girl who during the war years shared her products of compassion with her. At the same time, the young kindergarten teacher herself was torn to the war, and all her actions were aimed at achieving this goal. Makarova noted her strong-willed character, which allowed Rosa to seek respect from the people at the front too. From the published letters and diary of the girl sniper, it becomes clear how strongly this young and beautiful girl was eager to avenge the tortured and fallen compatriots. 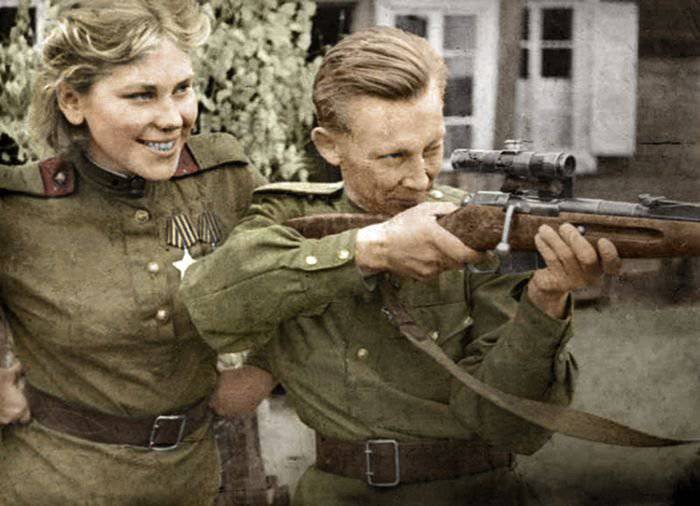 Interest in Rosa Shanina increased in 1964-65 in many respects precisely because of the publication of her military diaries in the Soviet press. After the war, the streets in Arkhangelsk and in the villages of Stroyevskoye and Shangaly were named after her. The house of her family in the village of Yedma was turned into a museum, and a memorial plaque was installed in the village school where she studied from 1931 to 1935. In Soviet times, traditional competitions of DOSAAF shooters were held in Arkhangelsk for the prize named after her. In 1980, the DOSAAF publishing house published two books that were dedicated to the girl sniper: “After the battle I will return ...” (N. A. Zhuravlev) and “To the wind in the face” (V. E. Medvedev).