April 3 2014
97
A year ago, in April of 2013, the Russian Ministry of Defense and the Sevmash plant (Severodvinsk) signed a contract, according to which, over the next several years, the 11442 project will be repaired and modernized by the heavy nuclear missile cruiser Admiral Nakhimov Orlan. This ship, which began service in the 1988 year, was sent in for repair at the end of the nineties and still has not returned to service. Long years of inactivity affected the condition of the ship, because of what he needs urgent repairs. In addition, weapons and airborne equipment is already outdated and must be replaced for the further operation of the ship. For these reasons, the Ministry of Defense ordered the repair and updating of the missile cruiser. 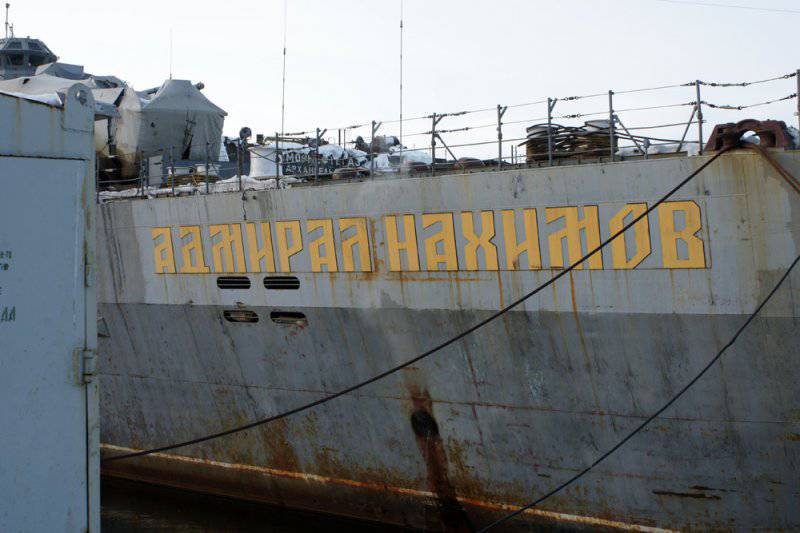 According to reports, the modernization program of the cruiser "Admiral Nakhimov" is designed for several years. During this time, specialists should examine the ship, determine its condition and draw up a list of necessary works. So, for the creation of a technical project for the modernization of the ship 21 was assigned a month from the moment of signing the contract. The project is developed by the Northern Design Bureau (St. Petersburg). The modernization project is supposed to be denoted by the index 11442М.

The Admiral Nakhimov’s nuclear cruiser modernization program is complex and expensive — the estimated cost of repairing and refitting the ship is estimated at 50 billion rubles. In addition, the work will last several years. The cruiser will return to the military fleet not earlier than 2018. After that, according to some reports, the Sevmash plant will begin the modernization of another ship of project 11442 - the cruiser Peter the Great.

Currently, preparatory work is underway, after which the repair of a heavy nuclear missile cruiser will begin. Now the workers of the Sevmash shipbuilding plant are building two pontoons, with the help of which the cruiser will be transferred through the threshold of the harbor and placed in the bulk basin of the plant. According to the plans for the current 2014 year, the ship “Admiral Nakhimov” over the next few months will be brought into the liquid pool of the enterprise. In addition, some preparatory work should be carried out this year.

According to available data, in the course of the upcoming modernization, the cruiser Admiral Nakhimov should receive new electronic equipment and new weapons. The systems installed on the ship have high enough characteristics; however, in order to save the cruiser as part of the navy, they should be replaced. For obvious reasons, accurate plans to replace equipment and weapons not yet announced. Moreover, there is every reason to believe that, to date, the requirements for an armament complex have not been fully defined. There are various assumptions about the possible composition of the weapons of the modernized ship, but none of them has yet been officially confirmed.

The main strike weapon of the project 11442 cruisers was the 3K45 Granite missile system. Each of the Orlan ships carries 20 inclined launchers for missiles of this type. According to various sources, Granite missiles are capable of hitting targets at ranges of up to 500-550 kilometers. For the implementation of air defense, the cruisers of the Orlan project are equipped with the S-300F Fort anti-aircraft missile system with ammunition of several types of missiles. To protect against aviation or enemy missiles at short range cruisers carry the Osa-M and Dagger air defense systems. In addition, ships of the project 11442 have several artillery systems. The artillery weapons of the ships include two AK-130 units with 130 mm guns and eight AK-630M automatic guns. To destroy the enemy’s submarines, the cruiser can use the URPK-6 Vodopad-NK missile system and the RBU-6000 or RBU-1000 missile launchers.

All available weapons systems allow you to perform combat missions, but in some situations their characteristics may be insufficient. In addition, most of the weapons of the Orlan cruisers were developed relatively long ago and become obsolete both morally and materially. In this regard, the replacement of weapons seems to be the right and logical way for the development of the Admiral Nakhimov spacecraft, and in the future, perhaps, its sisterships.

Two types of missile systems can be considered as new strike weapons. The cruiser "Admiral Nakhimov", depending on the wishes of the military, can be equipped with the P-800 "Onyx" or "Caliber" complex. It should be noted that when using Onyx missiles, the ship’s ammunition will remain the same - only 20 missiles of this type can be placed in the dimensions of the available launchers. When using the "Caliber" system, the total ammunition of the cruiser can be many times larger. According to some information, launchers for 11442 missiles of various purposes can be installed on the 80 cruiser.

Rocket systems "Onyx" and "Caliber" have both advantages and disadvantages. They are able to deliver a warhead to a distance of 300 kilometers, but at the same time have different flight characteristics. So, the Onyx missiles in flight reach speeds up to 750 m / s, and the Caliber ammunition resembles a marching segment of a flight at a subsonic speed. Despite the differences in flight data and the mass of the warhead, both missiles can complement each other. Therefore, it is suggested that, in the course of the modernization, the cruiser “Admiral Nakhimov” will receive launchers of two missile complexes at once.

The use of several different types of missiles, including those belonging to the same complex, will ensure greater flexibility in the use of such strike weapons. It should be noted that this idea has been used on American cruisers like Ticonderoga and destroyers like Arleigh Burke for several decades. These ships are equipped with Mark 41 universal launchers, which can carry 122 (Ticonderoga cruisers) or 96 (Arleigh Burke destroyers) missiles of various types. The Mark 41 launcher can be used with several types of anti-aircraft, anti-ship and anti-submarine missiles. The specific composition of the missile ammunition is determined in accordance with the task.

The architecture of the shock missile complex with certain modifications allows the 11442 cruisers to be equipped with universal launchers. However, we should not forget some features of the existing weapons. “Granit” missiles, which are armed with Orlan ships, are placed in slanted launchers, which imposes corresponding restrictions on the modernization of strike weapons. How this problem will be solved is not completely clear. It is possible that within the framework of the modernization project for the cruiser Admiral Nakhimov, a promising launcher with appropriate dimensions will be created for the use of new missiles.

The basis of the anti-aircraft armament of the cruiser "Admiral Nakhimov", apparently, will remain missile systems of the C-300F family. At the same time, there is a version according to which the ship will receive a vertical launcher of the Polymer-Redut air defense missile system. The composition of short-range air defense can remain the same, but one cannot exclude the possibility of installing new systems such as the Palash CRAW and the like.

Modernization of the missile cruiser "Admiral Nakhimov" should be completed by 2018 year. Soon after, another ship of the Orlan project, Peter the Great, will be delivered to the dock. The deadlines for completing the renewal of the second ship remain unknown. Probably the modernization will take at least 2-3 years, because of which the flagship of the Northern Fleet will return to service only at the beginning of the next decade. The fleet command plans for the two ships of the 1144 project are generally clear: over the next ten years they will be repaired, as well as receive new equipment and weapons. The future of the other two heavy nuclear missile cruisers has not yet been determined.

The lead ship of the 1144 project, the Kirov, was withdrawn from the Northern Fleet at the beginning of the nineties. According to reports, this ship seriously damaged power plant, because of what he can not continue to serve. The existing problems do not allow him to be quickly returned to service, and repair work may not be feasible due to the nature of the damage. The further fate of the ship "Kirov" has not yet been determined. Perhaps a decision will be made in the next few years.

Raises questions and the future of the first ship, built on the updated project 11442. The cruiser "Admiral Lazarev" since the end of the nineties is in the sediment. Moreover, at that time there were proposals to dispose of the ship, since the country was unable to carry out all the necessary repairs on time. However, the cruiser was saved. In the 2011 year, when the first information about the modernization of the Orlan project cruisers appeared, it was repeatedly claimed that the Admiral Lazarev would be repaired and modernized soon after the Admiral Nakhimov. Further information on the possible repair of the ship "Admiral Lazarev" has not been confirmed or refuted.

Available information on plans to upgrade the cruisers of the project 1144 can be interpreted in different ways. In particular, there is reason for concern for the fate of the ships "Kirov" and "Admiral Lazarev." In the case of the head Orlan, damage to the aggregates is the main problem. It is possible that their character will not allow the cruiser to be repaired, as a result of which it will be decommissioned and disposed of. The approximate terms of the repair and modernization of the ships Admiral Nakhimov and Peter the Great hint at the unenviable future of the Admiral Lazarev. Production facilities of the Sevmash plant, where it is possible to carry out all the necessary work, will be released only in the early twenties. In what condition by this time will be "Admiral Lazarev" - a big question. The cost and expediency of repairing and upgrading the old ship (by this time it will be more than 35 years old) will determine its future fate.

The program of upgrading the heavy nuclear missile cruiser "Admiral Nakhimov" and other ships of the 1144 project is of great interest. Nevertheless, the works started relatively recently, because of which most of the project details remains unknown to the general public. As a result, the modernization program raises a lot of questions that remain unanswered. I would like to hope that all current and future work will give a simple and understandable answer: "Eagle" with new weapons will return to the structure of the Russian Navy and increase its combat capability.