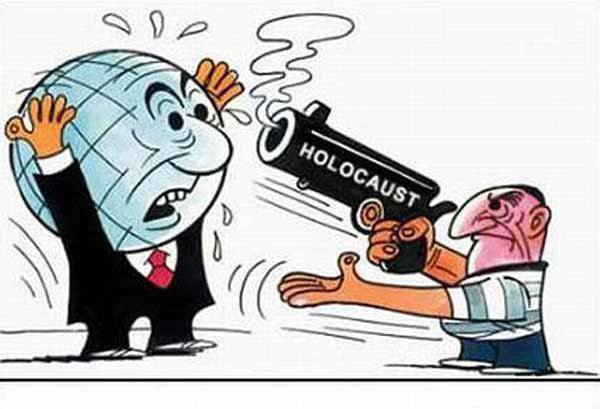 Recently, the host of the Russia-24 channel, Evelina Zakamskaya, in an interview with Alexander Prokhanov, dropped the phrase that the Jews themselves were approaching the Holocaust. The journalist from the channel was fired, and the unfortunate quote from the air went all over the Internet. We addressed Stanislav Kunyaev, the editor-in-chief of the magazine “Our Contemporary”, asking what the “Holocaust religion” is and why this topic is tabooed.

Stanislav KUNYAEV. The concept of "holocaust religion" was formed in the middle of the 60s. Israel needed a cult of what was called the Holocaust. Continents began to become covered with Holocaust museums, dozens of films devoted to this topic appeared on the screens. A huge propaganda machine, the meaning of which was contained in the aphorism, earned: “Whether our striving for a new world order is being crowned with success depends on whether we learn the lessons of the Holocaust.”

The possibility of a new world order was made dependent on whether the cult of the Holocaust would be perceived. And it happened: in America there is not a single state in which there was no Holocaust museum. Gradually, the Holocaust gained religious traits. The idea that Christianity is in crisis, the Calvary sacrifice of Christ is meaningless, has become the lining. Her place in the modern world was taken by the six millionth victim of the Jewish people. Therefore, the museums of the Holocaust are the temples of the new religion.

In order to create the state of Israel, a large number of immigrants were needed, but after the First World War, European Jews did not want to leave their homes. The idea of ​​returning to the original homeland suffered a complete collapse. And then the future President of Israel, Ben-Gurion, called for the creation of groups of people who would terrorize the Jews and force them to go to Palestine, and one of the leaders of Zionism, Chaim Weizman, said the terrible words: “I ask the question: Are you able to resettle six million Jews to Palestine? I answer: No. From the tragic abyss I want to save two million young ... And the old ones must disappear ... They are dust, economic and spiritual dust in a cruel world ... Only the young branch will live. "

The old ones are the branches of the Jewish people that are not worthy of living in Israel and are not needed by Israel, as they are spoiled by European life. By the time Hitler came to power, and the views of the Zionists turned to him, the Weytsman Haim Arlazor's Companion prepared an agreement with Hitler, the so-called "Haavar Agreement". The purpose of the agreement was to assist in the emigration of German Jews to Palestine. The contract was signed in August 1933 of the year, but Arlazorov had already been killed by that time, because all Jewish leaders, for example, Vladimir Zhabotinsky, who strongly condemned such plans for relocation to the East, did not like his plans. However, the monuments of Arlazorov stand on almost all areas of the major cities of Israel. In the Havar agreement, the forces of the Nazis, the ideology of Weizmann and Ben-Gurion were intertwined.

Then it turns out that half a million Hungarian Jews were actually sent to death camps with the help of their leaders, only a part was saved and sent to Switzerland. It was this price that purposefully created the state of Israel. Many honest Jewish authors wrote about this — the author of the book Holocaust Industry Norman Finkelstein, Hannah Arendt, who noticed that all the places where Jews were sent for extermination were coordinated by representatives of the Jewish street.

It is impossible not to recall Alla Gerber, who at the end of perestroika was inflaming rumors that persecution was being prepared for Jews in the USSR. They say that later she came to Israel and stated that she deserves the highest award, because, thanks to her activities, about 1 million Jews moved to the Middle East. In the nineties there were already a lot of articles in which, on the contrary, they wrote that Jews nowhere live as well as in Russia. All the rumors about riots and persecutions subsided, as if they never existed.

Now the peak of interest has passed, the project Israel is not supported by the forces of world Jewry, and in Jewish society there is much disappointment. They see how America has lost interest in the project of the Jewish state. The well-known publicist Israel Shamir predicts a rapid process of degradation of the state, which grew up on terror and violence. After all, Israel was built and at the expense of the Arab peoples, the UN has once committed a huge injustice when it decided to create Israel in the Middle East. Yes, initially it was about the state of two peoples, Arab and Jewish. But in fact it turned out that Jewish society simply ousted the Arabs.

I think we should rely on the work of honest Jewish authors who condemned the well-known practice of creating the state of Israel. And if our television was striving for objectivity, then the Holocaust would be spoken openly, with the involvement of various points of view. This topic should be covered: where can you get from the historical truth?

Ctrl Enter
Noticed oshЫbku Highlight text and press. Ctrl + Enter
We are
A great interview with Sergey Lavrov: about Ukraine, Obama and IranWhat you didn't want to know about England
Military Reviewin Yandex News
Military Reviewin Google News
293 comments
Information
Dear reader, to leave comments on the publication, you must sign in.