April 3 2014
76
To put it mildly, not the best times have come for full-fledged cooperation between Russia and Ukraine. The situation is such that today even the word “cooperation” looks out of place when it comes to hypothetically possible contacts between Moscow and Kiev. At this time, up to 99% of all “tangible” contacts between the Russian Federation and Ukraine in a very peculiar way are carried out through, perhaps, the media. First, statements of some about others are published in the media, because others through the media respond first. Even the mat slips - another hello to Tymoshenko ...

Against the background of the development of such a situation, an increasing number of mutually useful connections (useful for both Ukraine and Russia) are breaking, and there are no options yet to keep the remaining threads intact. Russian-Ukrainian trade is plunging into a deep crisis. The level of trade between our countries began to fall even a few months before the "victory of the Maidan" in Kiev. The first “swallow” of falling mutual trade volumes manifested itself at a time when the Cabinet of Ministers of Azarov, with the declared consent of President Yanukovych, was about to sign an agreement on economic association with the EU. Russia was forced to announce that it would protect its domestic market and the market of the Customs Union from European goods that could rush across the Russian border through the territory of Ukraine opening for them. This alone led to a chain reaction in the form of a “correction” of joint programs with a blow to the volume of trade. "Correction" stopped when Yanukovych announced that the signing of an agreement with the EU postponed. What started after that is known to all.

Today, the self-proclaimed authorities in Kiev say that the decline in mutual trade with the Russian Federation is already already benefiting the Ukrainian economy. However, not all Ukrainian politicians and economists speak in the form of ceremonial speeches “about the benefits” of falling commodity circulation with Russia. The so-called Minister of Economic Development and Trade of Ukraine, Pavel Sheremeta, who studied at the time at a business school in an American university, said this (the words UNIAN):

Trade with Russia, of course, decreases, since it requires favorable conditions on both sides. But at the same time this situation is favorable from the point of view of the EU. And there is growing trade.

As you can see, Mr. Sheremeta in this case does not even conceal for whom the fall in commodity circulation between Ukraine and the Russian Federation is favorable. So says: "favorable from the point of view of the EU." So he says: “it grows there” ... Well, at least what is in the current Ukrainian political system there are people who can call things by their proper names.

The growth of Ukraine-EU trade turnover since February of this year has indeed increased by about 14% on an annualized basis. It would seem that the Ukrainian partners need to rejoice - they were able to bring their products to the European market - a real trade victory for Ukraine. But Kiev with fanfare and festive processions still have to wait, because the turnover, as the minister said well, is growing "there." The fact is that the foreign trade deficit over the same period of time (from February 2014 of the year) in Ukraine grew by about 11-12% compared to the same period last year. Foreign trade deficit is the excess of imports over exports. If we combine information on the growth of Ukraine’s trade with the European Union with information on the growth of the foreign trade deficit in Ukraine, it turns out that it is growing European imports that ensure the said trade. In fact, this means that Ukraine still opened its doors to imports from Europe, but Ukrainian exports cannot squeeze into the same doors in any way - either the movement through the doorway is one-sided due to the skillful EU economic policy, or the Ukrainian economy itself So far, it is not able to offer anything substantial to "partners" in Europe. Ukrainian “authorities” in the person, for example, Yatsenyuk can say anything, but the figures mentioned are able to say much more than all the “Maidan leaders” put together.

Let us return to the trade between Russia and Ukraine. One of its large-scale segments is trade in the military-technical sphere. And here at the forefront is placed not only profit from mutual trade, but also getting the finished equipment or the necessary components for it. If cooperation in this sphere between Ukraine and the Russian Federation will soon be completely curtailed in the near future, then the blow will be delivered to two countries at once. 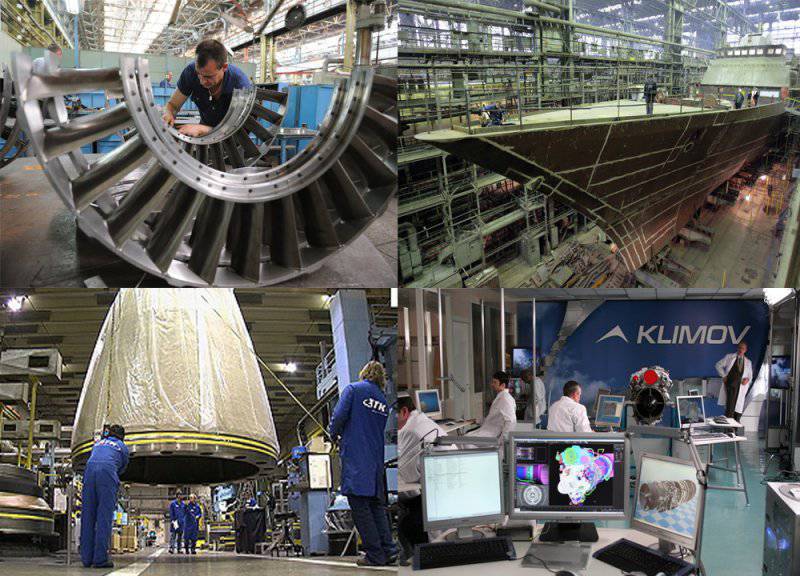 And if Russia in recent years has systematically (albeit not without thorny paths) moved towards a gradual reduction in the dependence of the military-industrial sphere on Ukrainian imports, opening its own production facilities (OJSC Klimov, which conducts a full cycle of engine development for aviation technology - as one example), then in Ukraine they didn’t even think about “reducing dependence” on Russian investments. Why think about it when the GP ZPorya Zorya alone - Mashproekt (an enterprise in Nikolaev) was loaded with orders for gas turbine engines for the Russian fleet, as they say, to the eyeballs.

This is hundreds of millions of dollars in profits plus jobs for professionals in a wide variety of industries. Apparently, already now the management of Zori - Mashproekt, predicting that Kiev can order to interrupt all trade relations with Russia, is trying to find buyers for its products abroad. Search decided in China. Last entry on this site GP NPKG Dated 18 March:

China remains one of the key partners of the State Enterprise “Zorya” - “Mashproekt”. SE "Zorya" - "Mashproekt" seeks to strengthen and expand its presence in this market.

Since 21 March, almost 2 weeks have passed, and information about the real "strengthening and expanding its presence in this market" is not published. Did you find new partners? - Silence ...

In the event that Zore - Mashproekt and dozens of other enterprises focused on cooperation in the military-technical sphere in Russia, Kiev declares the need to curtail trade relations with Russian customers, then the losses will, of course, not only the enterprises themselves , but also the Ukrainian treasury as a whole. Already billions of losses!
Russia will suffer losses as well, for with all attempts to create their own generating facilities, it was not possible to achieve full-scale success here. Apparently, close cooperation, high-quality order fulfillment by many Ukrainian enterprises, not delayed in time, suited the Russian defense industry to the full. Now the question becomes an edge: how to maintain close ties in the areas of vital importance for both countries against the background of large-scale confrontation? Will it be possible to answer this question, what is called, with a sober head?

It will probably be possible to fully maintain productive cooperation if Ukraine becomes a full-fledged federal state, when Kiev (as a center) takes into account not only the interests of people rushing to state power, but also the interests of the regions, including the interests of regional business. And if some of the candidates for the presidency (for example, a woman with a scythe) are categorically opposed to federalization, then another question arises - who benefits? The answer is simple: it is beneficial for those who, in order to please their own ambitions, want to finally bury Ukrainian production, turning Ukraine only into an additional market for selling foreign goods without any economic barriers.