9 May: The Moment Of Truth 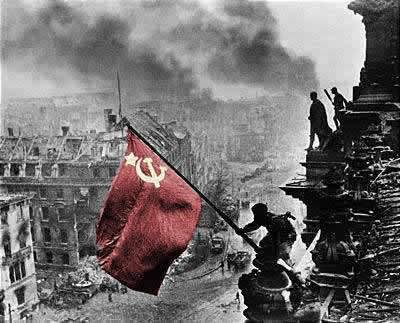 Never before has Victory Day coincided with the presidential election campaign. This time on May 9 falls right on the top of the election. The 25 vote, and two weeks before the “X” day, as almost all political consultants teach, comes the most important stage in the zombie electorate. What happens this time? I think it will be something special. The moment of truth, if you use the terminology of the book Bogomolov "In August 1944-th." Or "grandmother arrived." A unique work that can be re-read dozens of times.


A simple question is how should a presidential candidate behave on this day? - sends the headquarters of candidates in a deep out for obvious reasons. In the past few years, the celebration of Victory Day was accompanied by mass hysteria in the western regions. Viktor Yushchenko all his presidency was worn with the idea of ​​reconciliation of "warriors" of the OUN-UPA with these veterans of the Great Patriotic War, many of whom drove through the forests of their "twin cities". Every year the same sad picture was repeated: Viktor Andreevich told elderly veterans who were already prepared for death, fascinating stories about the common enemy with whom the whole "Ukrainian nation" fought. Somehow it so happened that everyone fought with hordes of "Savetsk" invaders, in the same line with the valiant SS men and soldiers of the Wehrmacht. At the same time, Yushchenko did not disdain to devour soldiers' porridge from the field kitchen, slap the People's Commissariat of one hundred grams, get behind the wheel and wipe in an unknown direction. And the veterans with trembling hands remained. At first everyone was silent. They are wise people. They understood that the new generation should live in a new way. They did not want to interfere with their sons, grandchildren and great-grandchildren. However, they could not accept the fact that the fascists are now their "sister". From this one thought they felt bad. And only then, left alone with each other, they swore in a whisper and drank more than usual. It's true. As well as the fact that the moron Yushchenko did not know that it is impossible to keep the elderly in the hall for two hours, because, as you see, he is engaged in important state affairs in the apiary. They were not even allowed to go to the toilet. It was like that.

Every year, the city of the “great European culture” Lviv gave a “pryklad” of how to burn, trample down, cut out the memory of Victory Day. Remember when the law on the Victory Banner was passed, that the people of Galicia got up “cultural” and “tolerant”? They unanimously shouted about provocations, that they, such a peaceful, European and cultural (bitch), impose a holiday of Soviet occupation! Veterans who tried to lay flowers on the graves of warriors who fell during the Second World War, brought down to the ground, kicked. In the buses on which they arrived, beat out windows. Crowds of young scum mocked the elderly, for whom the Victory Day will forever remain the most important and bright holiday in their lives.

They do not ask for anything, do not require. No benefits, no increased pensions. Is that drugs that have become terribly expensive, and many simply disappeared from the sale. Yes, there are only a few of them left ... With Yanukovych, payments of lump-sum benefits for Victory Day were resumed. Yes, they also returned the celebration of this holiday at the national level. The whole country celebrated and waited salute. Except, of course, three advanced areas in changing the history of the regions. They acted in a European way: they declared 8 on May as a mourning day, put candles on the “guilty warriors of the SS division“ Galicia ”, tied mourning ribbons on the flags of Ukraine, and also made sure that no red banner appeared on the streets of“ Mr. "Where they invented" kava and chocolad ".

What will happen this time when the power belongs to those who burn St. George ribbons on the Eternal Flame, as did the press secretary of "UDAR" in Odessa? Who founded a colony of militants in the center of the capital who shoot during “domestic quarrels”? Who filled the television broadcast with a muddy stream of lies and hysteria? Tens of thousands of people in Kiev every year came to the Eternal Flame, on the Maidan, to see a concert dedicated to the Victory Day. They have not gone away. Just today, to pick up carnations and lay them at the Eternal Flame is “treason” and “separatism”. Attaching the St. George Ribbon to the car is a challenge to suspend morals. To speak in Russian - "hidden invasive plans of Muscovy for the annexation of the Ukrainian state." They just want to cut out the memory of the Great Patriotic War, to make those who fought with the Nazis, "the true heroes of Ukraine." And it is on this day that the moment of truth will come. Yes, the same Dobkin, who today plays the role of a clown in the motherfuckers, will lay flowers with a sad beefy muzzle. He also counts on the voices of the south-east. Tigipko will begin to broadcast about universal reconciliation, respect for different points of view and the need to preserve historical memory. And veterans, who will never be allowed to enter Khreshchatyk, as real masters of life settled there for permanent residence, will be asked to celebrate the day of grief with all of Europe. No official events. Only honoring the "heroes" who fought alongside the great German people with the Stalinist regime. But in the Crimea everything will be human. It's true.

On Victory Day it will be crystal clear who exactly came to power. Even to those people in the capital who habitually hid, waiting for whose will they take. They fussily cross over to the other side of the street, seeing a group of scum in camouflage, trying not to appear in the center without special need. Recently I noticed that conversations in public places had faded: in supermarkets, subways, on the street. People are just afraid to speak Russian in the capital. Or they are not afraid, but simply fear. This is happening in the Russian-speaking city, which silently supported the Galician occupation. In principle, nothing surprising. Kievans experienced Dnipropetrovsk, Lviv, Donetsk and now the Galician occupation. This has developed a special style of behavior. Nothing strange. People are people. They should be taken with all the flaws and merits. But you can not forgive and accept those who defile graves and memory. Therefore, presidential candidates will face a very difficult phenomenon. I will call it a rebellion of memory. So be it. Friday, 9 May, as well as the events following this day will go down in history. I want to believe it. I think it will be so. It's not about the southeast that will rise, but about the country where they want to destroy from the atomic weapons ten million people who consider Victory Day the brightest and most important holiday.