Ukraine as a detonator of war and world crisis 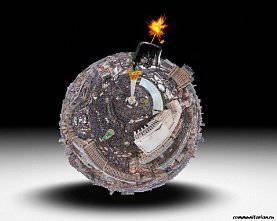 Today it is already quite obvious that Europe, with its inflammatory policies, contributed to the destabilization of the situation in Ukraine. But this destabilization can go far beyond the state borders of Ukraine.

Officials from the European Union and the leaders of some European countries supported and continue to support the Ukrainian radicals, hoping to drag "Square" to Europe as servants. If the goals of Washington in the “managed chaos” project in Ukraine are more or less clear, then Europe seems to be backed up by the backstage once again wants to use it “dark” for its geopolitical and economic goals.

In the 1930-ies, the Financial International brought the possessed Fuhrer to power in Germany and began to actively prepare the Second World War in Europe. Today, this same Financial International is leading to the power of the radicals in Ukraine. It is not excluded that in some time a “Fuehrer” will be selected from among them, who will be preparing Drang nach Osten (“The Impact on the East”). He will be prepared for a triumphal take-off on the basis of every kind of inflating the national-socialist hysteria "Ukrainian-Bandera spill." Ukraine itself is extremely weak for the onslaught to the East. Europe should help her. To help and inspire victory. Just as in 1938, Chamberlain and Daladier in Munich inspired the possessed Fuhrer to start a war. As a result of such a short-sighted and vile policy of its leaders, Europe has washed itself with blood and tears. And America and the fronts of the Financial International behind its façade became the "beneficiaries" of the Second World War. True, the war of that time was developing according to scenarios that were very different from the original plans of the Financial International. Unexpectedly, for the world behind the scenes, the second "beneficiary" was the Soviet Union, which was preparing the role of the main "loser".

I would like to believe that, nevertheless, Ukraine will not become a detonator of a third world war. However, it may well become a detonator of the financial and economic crisis. At least - European. And as a maximum - the world. After all, in order for the radicals and the Fuehrer to come out of their midst to become a real force, they need help. Not only ideologically and informationally, but also economically. Ukraine over the years of its “independence” was completely devastated. She only in order to repay her current liabilities on loans and credits, according to the newly-minted premier A. Yatsenyuk, it is necessary to urgently get $ 35 billion somewhere. In order for the real economy to somehow move, according to Ukrainian officials, need funds in the amount of $ 150-200 billion

Who will carry out the financial salvation of Ukraine?

Obviously, Russia will not give money to Ukraine under the current regime. This is facilitated by the current radicals, who self-proclaimed occupying various positions in the government. And it's not about their anti-Russian rhetoric. The leader of the Svoboda party, one of the main “heroes” of the Maidan, Oleg Tyagnibok, directly stated that Ukraine will not repay its debts to Russia. Including debt in the amount of $ 3 billion, which she received from Moscow. before the new year in the form of a loan. They say it was money given out to President V. Yanukovych. Neither Yanukovych nor the current government accepts any commitments.

As for America, which Maidan’s “heroes” love so much, it is ready to support these “heroes” only morally.

Sending their officials like Victoria Nuland to Maidan, who fed the people candy and cakes from her hands. More radicals can hardly be counted on. True, Washington has its own "purse" called the International Monetary Fund, which responds only to teams from the Treasury and the US State Department. A group of experts from the Foundation is coming to Kiev this week. Formally, at the request of Mr. A. Yatsenyuk, who would like to receive a loan of $ 15 billion. But I already wrote that the Fund and its Washington bosses are not so reckless as to give credit to a country that is one step away from default. Rather, the Fund will make titanic efforts in order to force Kiev to repay and service previously received loans.

Europe remains. But the financial and economic situation there is extremely deplorable. In January of this year. Eurostat has published the latest data on the sovereign (state) debt of the European Union and countries in the euro area.

As can be seen, over the year (from the end of 3 quarter of 2012 to the end of 3 quarter of 2013), the sovereign debt of EU countries increased by $ 351,1 billion, or by 3,2%. The sovereign debt of the euro area increased by $ 312,5 billion, or by 3,7%. The relative level of sovereign debt is growing inexorably. With current trends, it is estimated that the sovereign debt of the euro area countries may already reach 2015% of GDP by the end of 100. However, today many EU countries have a relative level of sovereign debt exceeding 100% of GDP. The highest rates of national debt to GDP at the end of the third quarter of 2013 were recorded: in Greece (171,8%), Italy (132,9%), Portugal (128,7%) and Ireland (124,8%).
The European Union today is a kind of card "house". If at least one of the countries defaults on sovereign debt, then it will pull all the other countries within the EU. The weakest links of the European financial system are the countries of Southern Europe, as well as Ireland. The European Central Bank, special funds of the EU, the IMF are engaged in refinancing their debts. Already it becomes harder for them. Therefore, expropriations begin to be applied, i.e. the most banal cancellation of obligations of banks and states (Cyprus model of expropriations). Thus, Europe simply has no money for Ukraine. And, if Europe starts the financial salvation of Ukraine, then it can go to the bottom.

Threats to Europe from Ukraine

First of all, if the situation in the Square is not stabilized, then direct physical threats may arise for Europe. On the territory of Ukraine is 4 operating nuclear power plants. Protection of these objects, in fact, no longer exists. Nuclear power plants are an ideal target for terrorist acts. Europe, by the way, has not forgotten yet history from the Chernobyl nuclear power plant.

Secondly, an outflow of refugees to Europe may arise from Ukraine at any moment if a civil war begins in the “Square”. Even if they are not refugees, but only guest workers, they also will not contribute to social stabilization in Europe. The problems of multiculturalism and unemployment after the appearance of hundreds of thousands of Ukrainians in Europe will only get worse. About this "humanitarian" threat posed by today's Ukraine, he said, in particular, at a forum in Davos in January of this year. former president of Poland Alexander Kwasniewski.

Through the gas transportation system of Ukraine 83,7 billion cubic meters was supplied. meters of gas, that is, 33% of total European imports and 15,47% of total consumption passes through the territory of Ukraine.

Yes, of course, today Russia is constructing a whole range of pipelines bypassing Ukraine. Both Russia and Europe are interested in this, since Ukraine is too unreliable for them. It can intercept (already intercepted) the gas intended for Europe and shut off the valves. But quickly get rid of the Ukrainian mediation is impossible. Last year, 52% of our exports to Europe passed through Ukraine. Due to the unstable situation in Ukraine, scenarios such as blocking Russian gas flows to Europe either for political reasons (one of which is “annoy” Russia, depriving it of export earnings) or as a result of terrorist acts on pipelines are not excluded. Experts say that the Nord Stream pipelines, the South Stream pipelines and a number of others in the event of a similar development of events will not be able to fully absorb the additional amount of gas.

The European energy crisis could escalate into a global financial

And what can happen in this case? Under the blow will be such recipients of Russian gas, as Italy, Turkey, France, Czech Republic, Slovakia and Austria. But not only they. The inevitable rise in prices for liquefied gas, and then oil, and after it to other types of energy carriers and oil products. And this can create a “trigger” effect. European countries may not withstand such an energy crisis. Italy may be the weakest link in the European structure, which, according to the relative level of sovereign debt, is now in second place in Europe after Greece - 132,9% of GDP. The absolute amount of debt - 2,1 trillion. Euro. According to this indicator, it is today in the first place, ahead of the UK, France and Germany. So any disruption in the transportation of natural gas through Ukraine will instantly send Italy into the knockout. And then the European house of cards can be formed in 24 hours.

But whether it will be after this world crisis, it is difficult to say. A serious blow can be inflicted on the Chinese economy, which is very dependent on energy imports. But for America, the increase in energy prices today is not such a critical factor as it was a few years ago. Its dependence on energy imports is rapidly declining. So America can resist.

In general, some experts believe that the current "controlled chaos" in Ukraine is designed precisely to destabilize the energy situation in the world and provoke a global financial crisis. Conceived this plan in Washington. America has been preparing for its implementation for several years, increasing its energy self-sufficiency. Those. Washington has planned an operation codenamed "The global financial crisis minus America."

Initially, Washington chose the Middle and Near East as a detonator of the energy and financial crisis.

In the fall of 2013, a detonator called “Syria” was supposed to work. However, it did not work. Now Ukraine can be such a detonator.

And, as always, Washington attracted its short-sighted European "allies" to the implementation of its clever operation in Ukraine. They can become one of the first victims of the conceived world behind the scenes of the energy and financial crisis.