April 2 2014
29
28 March 2014 at the Admiralty Shipyards in St. Petersburg was removed from the workshop and launched the fourth large diesel-electric submarine of the 06361 project - HQ-185 Khanh Hoa (building number 01342) under construction for the Vietnam Navy. The boat was laid in workshop No. 12 "Admiralty Shipyards" 23 October 2012.


The construction contract for Vietnam for 2016, the year of six submarines of the 06361 project worth about 2 billion, was concluded by FSUE Rosoboronexport in December 2009 of the year. Taking into account the construction of infrastructure, supplies of weapons and other things, the total cost of work under this agreement reaches 4 billion dollars. As previously reported, the Admiralty Shipyards has completed the construction of the first three boats under this contract - HQ-182 Hà Nội (construction 01339 number), HQ-183 Ho Chi Minh (building number 01340) and HQ-184 Hai Phong (building number 01341), of which the first two have already been delivered to Vietnam, where the main boat Hà Nội officially entered the Vietnam Navy 15 January 2014 of the year. 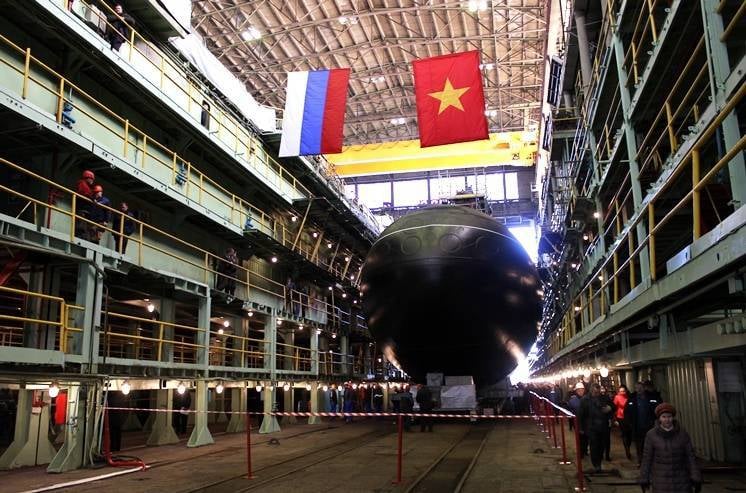 Decommissioning of the fourth large diesel-electric submarine HQ-185 Khanh Hoa of the 06361 project under construction for the Navy of Vietnam from the Admiralty Shipyards OJSC. St. Petersburg, 28.03.2014 (c) Sergey Kokov / www.shipsupply.ru

Ctrl Enter
Noticed oshЫbku Highlight text and press. Ctrl + Enter
We are
The action “Military service under the contract is your choice!” In Rostov-on-Don: future contract servicemen, exhibitions and “Russian Knights”Vietnam received a second submarine project 06361 and put into operation the first
Military Reviewin Yandex News
Military Reviewin Google News
29 comments
Information
Dear reader, to leave comments on the publication, you must sign in.