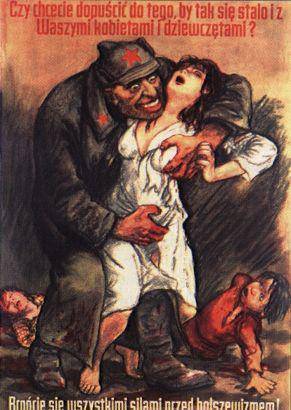 “Soviet soldiers considered rape, often carried out in front of the husband and family members of a woman, as a suitable way to humiliate the German nation, which considered the Slavs a lower race, sexual contacts with which were not encouraged. The Russian patriarchal society and the habit of riotous jokes also played a role, but resentment at the sight of the relatively high welfare of the Germans was more important. ... The victims themselves were permanently injured: German women of the military generation still call the Red Army War Memorial in Berlin "The Tomb of the Unknown Rapist."

“According to estimates of two main Berlin hospitals, the number of victims raped by Soviet soldiers ranges from ninety-five to one hundred thirty thousand people. One doctor concluded that approximately one hundred thousand women had been raped in Berlin alone. And about ten thousand of them died mainly as a result of suicide. ”

There are independent studies of the problems of military offenses during the occupation of Germany. The data obtained suggest that the situation was significantly different from the myth prevailing in the West.

Western authors arbitrarily refer to the number of millions of German women raped. In fact, these data from the book of two German femenistes were obtained by arbitrarily extrapolating the data collected in one of the Berlin hospitals to the whole city and the whole country. It is proved that using other source data and arbitrary author's estimates, you can get any number of people raped, including a superior number of East Germans.

In reality, the statistically inevitable cases of crimes among the soldiers of the Red Army were not massive in nature, and were condemned by official propaganda and military justice. The exact data on their absolute number are not yet available to researchers, however, documents currently known indicate the limited number of such incidents. The myth about them was actively spread by German military propaganda at the final stage of the war in order to mobilize the efforts of the population to resist the anti-Hitler coalition. After the war, samples of the propaganda department of Goebbels were actively used by the United States against the USSR, which was reflected in a number of "historical research ”, which are subject to valid criticism by contemporary authors.

There is no doubt that individual acts of rape were committed by soldiers of the anti-Hitler coalition participating armies in Europe and the Pacific theater of war, but unlike the analogous actions of the Axis armies, they were not massive and systematic.