April 2 2014
15
At one time, the USSR caught up and overtook the United States by the number of built nuclear submarines. In the Soviet Union was built about 250 ships of this type. At the same time, the service life of nuclear submarines is relatively short, on average 25 years, and the boats of the first series served even less. All of this Soviet "legacy" went to modern Russia. The disposal program for decommissioned nuclear submarines built in the USSR still continues in our country. At the same time, work on the disposal of decommissioned submarines is very important in terms of improving the environmental safety of our country.


The problem of handling reactor compartments and reactors of dismantled nuclear submarines in Russia is large-scale in nature and has existed since the atomic submarines, which had served their time, began to be mass deduced from the Navy. This problem requires non-standard approaches, since the reactor compartment of a submarine cannot simply be put into scrap metal, as is the case with other compartments today. For some time, the three-compartment units (reactor compartment + 2 of the adjacent compartment - to ensure the buoyancy of the structure) are kept afloat in specially designated places. This solution is intermediate and forced, in 1990-s it was used due to lack of money and time. However, now the situation is changing for the better.

In Primorye, the problem with the disposal of reactors decommissioned submarines of the Pacific fleet (Pacific Fleet) of Russia in the Robber Bay will be resolved by 2020. Currently, this bay has a long-term storage facility for the reactor compartments of utilized nuclear submarines. 54 reactors were already located in Primorye; 19 more will be delivered here from Kamchatka. Their disposal is carried out as part of the target program "Industrial disposal of weapons and military equipment", which is designed for the period until 2020. Disposal of spent reactors will be carried out using Japanese equipment that was transferred to our country on May 18, 2012. 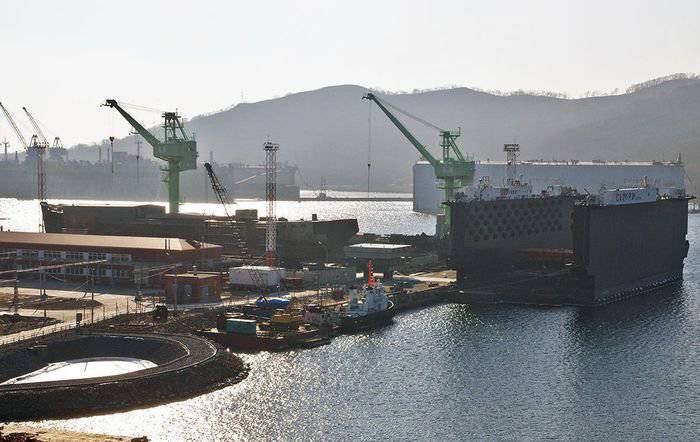 In May, Japan handed over 2012 to DalRAO - the Far Eastern Center for Radioactive Waste Management - floating dock “Sakura” with a displacement of 3500 tons, a sea tug Sumire and 2 port cranes with a loading capacity of 30 and 10 tons. The cost of equipment transferred by Japan amounted to about 2 billion rubles. The transfer of special equipment was carried out in the framework of existing intergovernmental agreements between Russia and Japan on the use of atomic energy for peaceful purposes. It is worth noting that Tokyo has been participating in various international programs that have been focused on the dismantlement of nuclear submarines in the Pacific region for the past 20 years. It should be noted that the Japanese side fulfilled all contractual obligations on time, despite the tragic events of March 2011 of the year in the form of the terrible tsunami that hit Japan. And this is not the last project between the two countries. Japan intends to provide financial assistance in the construction of a special workshop for cleaning and painting of tricycle blocks on the territory of Razboynik Bay, which will be delivered to the land.

According to the Director General of the State Corporation Rosatom Sergey Kiriyenko, in the next few years, fragments of submarines withdrawn from the Pacific Fleet will be processed in the territory of Primorye on the basis of the DalRAO enterprise. During his working trip to Primorye, Sergei Kiriyenko told reporters that at the moment we can say that there are no radiation-hazardous objects left in the Russian Far East. According to him, spent nuclear fuel was unloaded from all submarines that were withdrawn from the fleet. At the same time, the reactor compartments cannot be cut and disposed of due to the presence of residual background radiation. According to Kiriyenko, the reactor compartments will need to be brought to a safe storage condition: the reactor compartment is cut out and then installed on a solid foundation on land. This ensures complete reliability of its control and storage. These reactor compartments will be disposed of as residual radiation disappears. 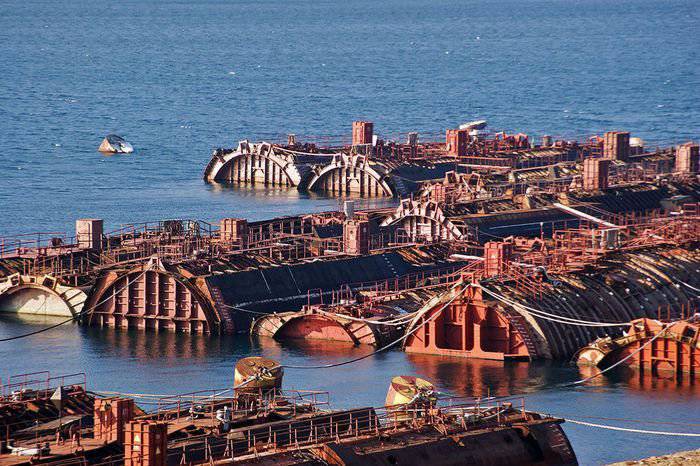 If earlier cutting of nuclear submarine hulls was carried out at the Zvezda plant located in the coastal city of Bolshoy Kamen, then now all the relevant technologies are fully mastered by the Rosatom enterprise’s DalRAO team. Now this work can be carried out faster and cheaper. The first 3 three-compartment units on DalRAO have already been turned into single-compartment units; they were installed on the bank for long-term storage. At the same time, the 51 three-compartment unit is located on the basis of the enterprise, another 19 of such units will be delivered here from Kamchatka. At the moment, this is the entire volume of the submarines withdrawn from the Pacific Fleet, Sergey Kiriyenko stressed. According to the Rosatom general director, it is necessary to dispose of these 70 units as quickly as possible, since new submarines will soon be discharged from the Navy. Today, DalRAO faces the task of reaching the volume of processing of 8-10 blocks per year.

If we talk about liquid radioactive waste, then in 2013, the entire volume of LRW accumulated by the Russian TFO (of the order of 10 thousand cubic meters) was completely reprocessed. Liquid wastes were recycled due to the close cooperation of DalRAO with the Institute of Chemistry of the Far Eastern Branch of the Russian Academy of Sciences. This year, Primorye should leave the last echelon with recycled nuclear fuel, which posed a danger comparable to the two Chernobyls. Due to this, following the results of 2014, in the Far East there will be no more spent nuclear fuel from nuclear submarines. The fuel unloaded from reactors of nuclear submarines is sent to the Chelyabinsk region to the specialized plant "Mayak". After resolving the issue of the most hazardous liquid waste in Primorye, they will come to grips with industrial and household waste with increased radioactivity.

To solve this problem, a special center for the conditioning and storage of solid radioactive waste is planned at ZATO Fokino, which can store up to 40 thousand cubic meters of such waste. The auction for the design and survey work on the construction of this center of the Rosatom Corporation was published on the official website of state procurement 14 in November 2013. The auction cost was 211 million rubles. According to the auction, a modern enterprise for the processing and long-term storage of radioactive waste, which was formed during the disposal of the nuclear submarine fleet, as well as the newly formed radioactive waste, will be built in the Closed Formation of Fokino in the coastal bay of Sysoev. 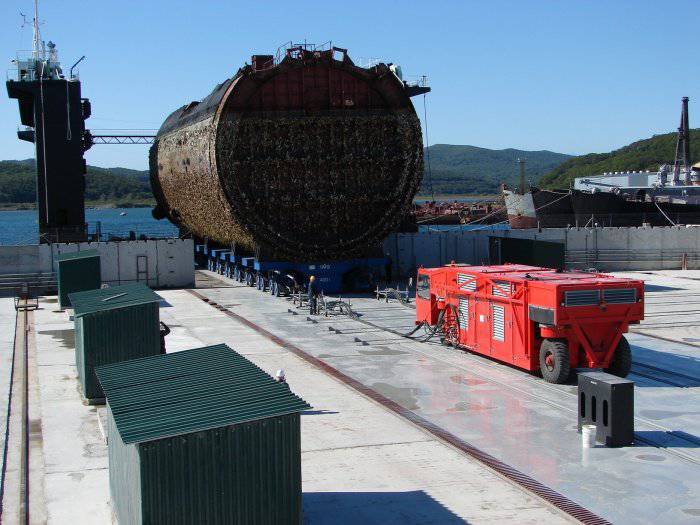 According to Sergey Kiriyenko, today the main task is to separate clean waste from polluted. Contaminated waste will have to be compressed and stored in safe sealed containers. Until recently, all this was stored in temporary trench repositories that could not guarantee the long-term safety of stored waste. At the same time, the head of Rosatom emphasized that no additional waste would be brought here for storage. But in a safe way to recycle everything that is in the territory of the Primorsky Territory - this is the task that DalRAO enterprise can cope with.

This statement was supposed to reassure the local community and environmentalists, who were anxious about news about the construction in the edge of the solid radioactive waste storage center. The acute public reaction to this news was largely due to the lack or lack of information from Rosatom about its plans. The lack of such information quickly gave rise to various speculations and prejudices. In turn, Nikolay Lysenko, director of DalRAO (the customer of the project of the storage of radioactive waste), held a personal meeting with environmentalists of the region, assuring them that no “nuclear repository” would appear in Fokine. To remove all doubts, Nikolay Lysenko agreed to sign a specially developed environmentalists memorandum, which guarantees the safety of the proposed facility for the life and health of residents of Primorsky Krai.