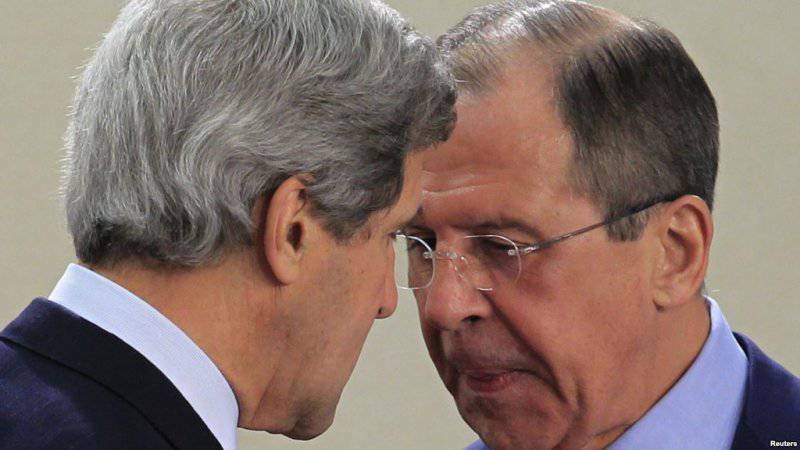 The four-hour emergency talks Lavrov-Kerry in Paris, for which Kerry deployed his plane flying to Washington, ended without result. Separate diplomatic press conferences allow even talking about failure.

It can be assumed that Lavrov repeated Kerry’s Moscow proposals, which he had previously spoken about on the Sunday Time program: about the confederative structure of Ukraine as a way to preserve its unity, about the need to protect the rights of the Russian-speaking population, including the right to speak their native language, and disarmament extremists.

In any case, the US Secretary of State confirmed that the topic of federalization was touched upon, but noted: "We cannot decide for Ukraine." And he immediately demanded that Russia withdraw its troops from its border, they de "create an atmosphere of fear and intimidation in Ukraine."

Actually, we have long guessed that Kerry and Obama do not solve anything at all. They only do that they repeat the positions formulated by someone, and take time-outs. Who decides for them? - only McCain knows with Biden. Was it really for the sake of these long-known, in principle, Moscow proposals, Kerry launched a plane to Paris? Perhaps not only.

In the same “Sunday time,” Sergey Lavrov stated that there is information at the disposal of the Russian leadership, according to which the Ukrainian nationalist movement “Right Sector” could lead the shooting of snipers on the Maidan.

And his subordinate permanent representative to the UN, Vitaly Churkin, went even further: he said not so long ago, and on the UN fields, that some American headquarters were in charge of extremists on the Kiev Maidan. The representative of the State Department called this statement Churkin disgusting lie, but ... what if Lavrov has information about that?

High diplomats did not say a word about the events on the Kiev Maidan, although Lavrov’s mysterious “information” about snipers could be a real reason for the Kerry plane to turn to deliver it to the right place ...

Kerry’s demand to withdraw Russian troops from the regions bordering on Ukraine, by the way, repeats the State Department’s demand for Yanukovych to withdraw police units from Kiev so that they don’t intimidate “peaceful demonstrators”, I mean Bandera’s militants.

And this is at a time when the latter are already imposing their own rules in the eastern Ukrainian regions bordering on Russia, when Yarosh, Korchinsky and other leaders of the Ukrainian neo-Nazis openly threaten terrorist attacks in Russia and even partisan war. They have the audacity to claim the rights to a number of Russian regions!

In fact, Russia has the full right to demand the immediate disarmament and prohibition of all these Bandera formations, but otherwise it has the right to work on them itself. On the simple basis of the stated threat of a terrorist invasion.

Russia is now simply obliged to strengthen its border, otherwise how to prevent the penetration of the militants? And the United States, in fact, is trying to clear the way for Bandera militants to Russia, as they cleared it in Kiev. And cover up politically.

... It is interesting that a meeting of high-ranking diplomats was held at the Russian embassy, ​​away from the all-hearing NSA-CIA ear? Lavrov noted that the negotiations were "constructive." By this he, in fact, gives Kerry a chance to be constructive.

Lavrov puts pressure on Kerry, but does not drive him into a corner, does not blame, for example, the United States of participation in the coup d'etat in Kiev. Although he could repeat the words of his subordinate Churkin, say that the American instructors were behind the backs of the militants of the Right Sector, and now the American embassy in Kiev stands behind the government of Yatsenyuk-Turchinov, in response to the accusations of the US of the “annexation of the Crimea.” Sly fox, this Sergey Lavrov, whom in the US "it is customary to hate."

Ctrl Enter
Noticed oshЫbku Highlight text and press. Ctrl + Enter
We are
Situational analysis of the death of the MH17 flight (Malaysian Boeing 777), made on the basis of engineering analysis from 15.08.2014Results of the week. “You are already indebted to the sea: neither the bottom nor the coast”
Military Reviewin Yandex News
Military Reviewin Google News
65 comments
Information
Dear reader, to leave comments on the publication, you must sign in.