The best jokes now from the USA and Ukraine 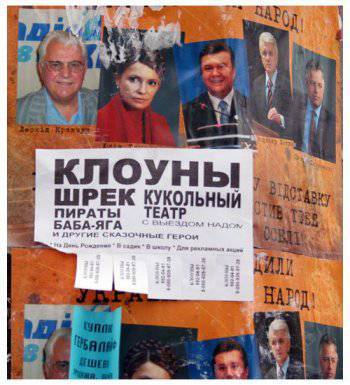 1 April relies to joke and have fun. And therefore, in the words of the King Leonov in the “Ordinary Miracle”, “today I will be joked. Fun, good-naturedly, with all sorts of innocuous antics. Prepare the dishes, plates, I'll beat it all. Remove the bread from the barn. I'll set the barn on fire. ”


However, I will not joke around. Better remember the most successful jokes of recent times, worthy of entry in the annals.
So - people, contracts and organizations that amused us.

Of course, the yellow jersey of the leader belongs to US Secretary of State J. Kerry, who stated that "in the 21st century, you can no longer behave in the style of the 19th century and invade another country under a completely contrived pretext." The depth of irony is appreciated by the world.

He is echoed by a colleague - NATO Secretary General Rasmussen, who during the 15 anniversary of the NATO bombings of the capital of Yugoslavia called Russia’s “military invasion” of Ukraine the biggest threat to Europe’s security since the cold war.

Of course, the April Fools document was the agreement of February 21, the very next day sent to his basket by the guarantors - the ministers of Germany, Poland and France. The Association Agreement between Ukraine and the EU is growing up with humorous details, for whose non-signing Yanukovych was overthrown. After that, frank Hochma was the statement of the self-appointed Yatsenyuk: “We have postponed until the signing of the economic section of this document, taking into account our worries and concerns, whether the free trade zone will lead to negative consequences for the industrial regions.”

In general, the best jokes these days came naturally from Ukraine. It is understandable. As N.V. Gogol, an expert on these lands, wrote: “But it’s best when everyone gets together in a tight pile and begins to make riddles or just carry on chatter. My goodness! Why not just tell! "

These days we heard a lot about the fact that there were no militants and fascists on Independence Square. Only onizhedeti. The ghost of Sashko Bilogo was killed by the Ukrainian unit of the “fighters with ghosts”, and all the public statements of the Yarosh and the right-handers were the evil cinema photo photographer Dm.Kiseleva. By the way, Yarosh’s accusations against Avakov’s ministry of working for the FSB, as well as the counter-suspicions of European politicians that the “right-wing sector” itself works for the FSB and Putin personally, must also be among the April Fools' pearls.

A statement by the permanent representative of Ukraine to the UN, Sergeyev, is also sent to the ranking of the best jokes that all the accusations against Bandera at the Nuremberg Tribunal were unfair and fabricated.

And we read a lot about how “any citizen of Russia can come to the Maidan and see for himself that there is no anti-Russian orientation”. And all these “moskalyaku to gilyaku” and “hto not jumping” - this is an example for you from the lack of understanding of the national humor.

The miraculously healed Yulia Tymoshenko has distinguished herself repeatedly. At first, she promised from a carriage to the demonstrators on the Maidan that Ukraine would soon become a member of the European Union. Then the pannochka stated that in a referendum 34% had voted to annex Crimea to Russia. And the most recent April Fool's joke was the declaration of its income last year.

Of course, we will appreciate the ingenious promise of several presidential candidates to return the Crimea quickly and without problems.
Arseniy Yatsenyuk publicly broke away at a meeting with the Canadian prime minister that Ukraine is ready to take a place in the G-8 if Western countries will exclude Russia from G8.

As if the president of Ukraine, as it were, Turchinov declared that, as it were, “today in Ukraine there are no prerequisites for its federalization”.

And a group of humorists from the Verkhovna Rada launched an initiative to denounce the Nuclear Non-Proliferation Treaty weapons and turning Ukraine into a nuclear power.

Prior to that, a number of ukroSMI amused the world newsthat the United States sent to the rescue of Ukraine in the Black Sea aircraft carrier George HW Bush and three submarines.

The Foreign Ministry of Ukraine issued a cool crust yesterday with a note of protest about the visit of the Russian Prime Minister to the Russian Crimea by 31 in March: "The uncoordinated stay of an official from another state on the territory of Ukraine without prior agreement does not comply with the law." I am waiting for notes from the Ukrainian Foreign Ministry every time the procession of our president passes by the Ukraine Hotel on Kutuzovsky Prospekt in Moscow.

The German ministry minister Steinmeier also gave a smart joke: “Russia should provide economic and financial assistance to Ukraine”. Against this background, the proposal of Zhirinovsky to Poland, Hungary and Romania to demand a referendum on the accession of seven regions of western Ukraine to these countries looks like a serious topic for discussion.

In general, it seems to me that our peoples and politicians approached this 1 of April with notable achievements. Cheers, comrades! Burn further, Ukraine!

Ctrl Enter
Noticed oshЫbku Highlight text and press. Ctrl + Enter
We are
About Stalin and KhrushchevHow can Russia survive and win in the 21st century?
Military Reviewin Yandex News
Military Reviewin Google News
62 comments
Information
Dear reader, to leave comments on the publication, you must sign in.