April 2 2014
30
The last three weeks have been sitting for hours on Skype evenings and arguing hoarsely with my advanced Russian friends and colleagues. Three for the Crimea. 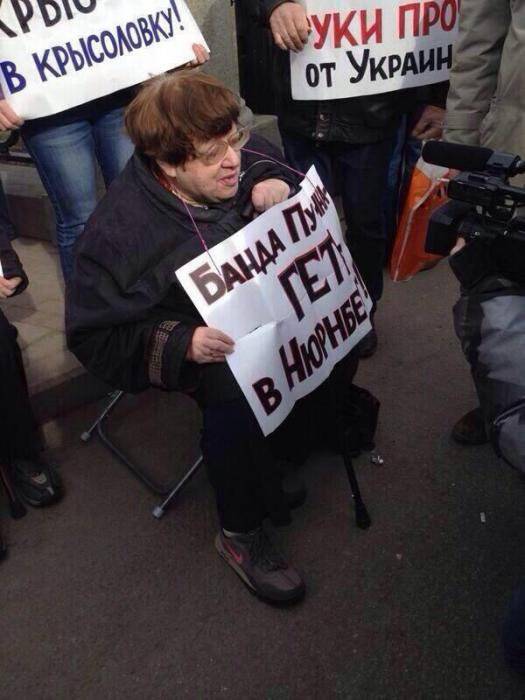 That the reunification of the Crimea and Russia is, in principle, a positive thing, we agree. What happened is by the mutual will of the overwhelming majority - too. But my Russian friends are sure that this should have been done in a “democratic way”. To negotiate with the US and the EU, to convince the Security Council and the whole UN, to win over world public opinion ... And even then arrange a holiday like the reunification of the two Germanies.

And so: Russia has forever quarreled with the fraternal Ukrainian people, Russia has restored against itself all civilized humanity, Russia will receive sanctions, and in general - now they do not like Russians. In vain, they say, used "polite green men." Rude, ugly, fu!

Some of my democratic friends even went to the anti-war rally. “You are against the war?” - “Of course!” - “Then let's go!” And the pacifist guys, and Andrei Makarevich, whom I respect, went in the front ranks. They carried a pink placard with children's rhymes of the Ukrainian poet Pavlo Tychyna above them: “A tractor in a field of holes-holes-holes, We are for the world, we are for the world!” My dear. Like this: 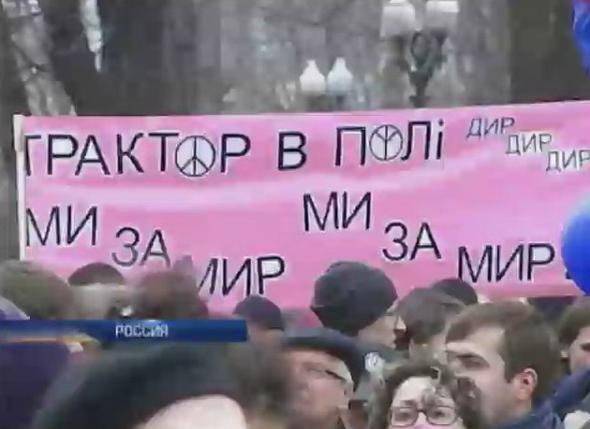 And behind these noble pacifists guys attached with the flags of black and red Bandera colors. Here they are: 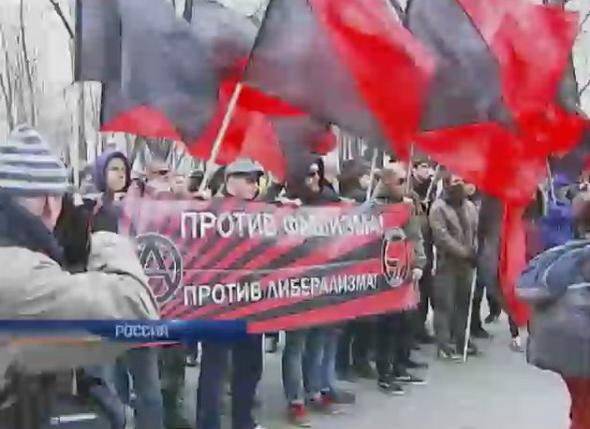 So this is not Bandera flags! - svidomye Ukrainians will cry out, - At the Bandera strip - horizontally, and at these - diagonally! Boys, do not Treba us duryty! We understood perfectly what you meant. And the UPA greeting rushed over the center of Moscow in the spring of 2014: “Glory to Ukraine!” And the cheerful crowd of Muscovites (Muscovites) in a Bandera manner answered in unison: “Glory to the heroes!”. Surrealism…

I understand Ridna Mova well, read Ukrainian blog sites. If you knew what kind of rzhach and jubilation there was after this “anti-war” rally ... It was you, the Democrats, who thought that they were going to an anti-war rally, and you were “stupid cattle-Muscovites” —for Bandera mini-maydanchik. While you are there "holes-holes-holes ..."

In this place, my democratic friends gloomyly object, they say, symbolism does not mean anything, everyone puts their own meaning in it. Well, then the leader of the Hitler Labor Front, Robert Ley was wrong when he wrote: “We start with three-year-old children. We give the checkbox in hand, then - the school, the Hitler Youth, the assault squadron, the service in the army. A person comes to us for processing, without even realizing it, and when he goes through all these stages, the Labor Front takes it and does not let go to the grave, whether he wants it or not. ”

Do you know how the students of Robert Leia are working in Latvia now? Look here: 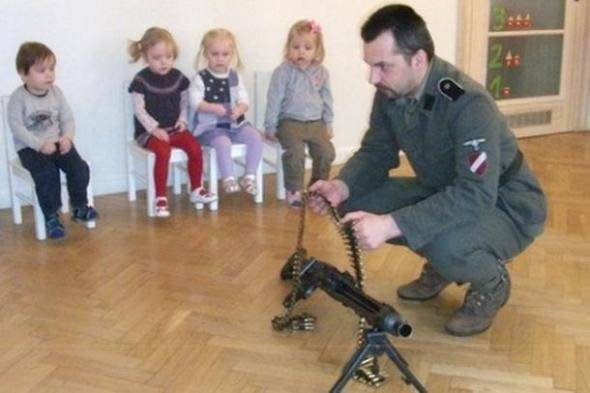 This is a genre scene from a Latvian kindergarten. Here is more, even the video is with Russian subtitles. A man in the form of the SS Legion conducts a lesson in patriotic education among three-year-old children (according to Leia). On the sleeve - Hitler's eagle with a swastika. This is for kids.

And this is for adults, such wall calendars are sold in bookstores in Riga (here it is possible to look completely with the Russian translation). Learn the shape and weapon? 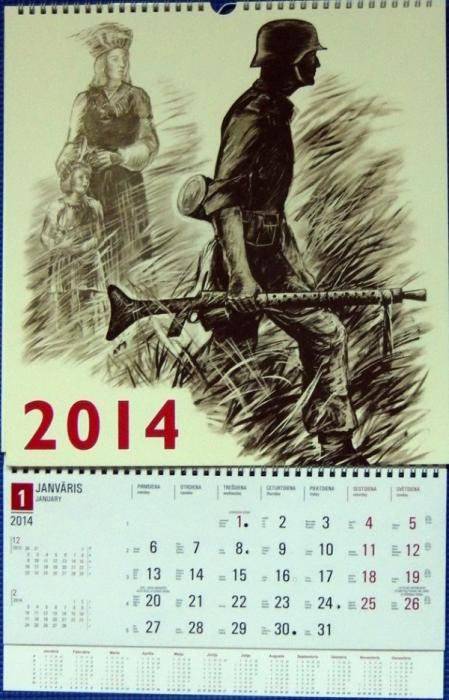 Every year on March 10, the neo-fascists march in the center of Riga on the day of the memory of the SS Legion. Just the day of the referendum in Crimea, such a procession took place - 2 thousands of people. Do you think civilized Europe does not know about this? Even as he knows! Why are you silent? And she needs it. In the event that Latvia suddenly gets out of hand and begins to draw closer to Russia, they will include the Latvian Maidan.

By the way, about the democratic West ...

All the same, - my Russian friends object, - our Putin is authoritarianism and totalitarianism, bloody gebnya and military! And the USA and Europe are democracy, international law and freedom. They need to negotiate, explain, try to penetrate into their democratic values ​​in order to solve problems together ...

Guys, well, don't you really see that the bloody Maidan-2014 is a joint project of the USA and Europe. The very goal that they set themselves: to create a new Yugoslavia on the border of Russia (Libya, Syria, at worst - Egypt). For this purpose, American and European emissaries rushed to dozens of Maidan and poured gasoline into the fire. Money, calls, promises, cookies.

Tires were burning on Maidan a long time ago, Molotov’s cobblestones and Molotov cocktails were flying to the police, dozens of people on both sides were already injured in hospitals ... And another messenger from the “democratic” West called Maidan a “peaceful demonstration”, called on him to “fight the criminal power” and yelled "Glory to the Heroes!" Were they blind? They did not see where this terrible game is heading? All they saw and instigated deliberately, purposefully and cynically. They needed it.

And now the question is to my democratic Russians: HOW can we reach an agreement with the System on a civilized, peaceful resolution of the conflict, if the purpose of this System is a conflict?

Freedom is not in his fatherland ...

Unfortunately, in addition to Russian and Ukrainian, I also know Latvian, English, and I understand a little Lithuanian and Polish. So to say, I am at the crossroads of information fields. When you don’t understand other languages, it seems that the Western media are free, impartial and pluralistic. And when you understand and begin to compare the coverage of the same events in different languages ​​...

Sketch: calling the Ukrainian colleague, a man in Chechnya went under bullets, interviewed field commanders ... I ask: write what's going on in you ... - No, he says, old man, I am not writing now. - Why ?! - I already had two calls, they said: shut up, moskalskaya bitch ... Sorry for the family, they said that there will be no third call ... However, we’ll leave the Ukrainian media aside, there’s a hysteric, editorial issues are resolved in the face.

But look English, American, Latvian, Lithuanian, Polish TV channels - you will be surprised that all the "democrats" of all countries do news on the topic Russia-Ukraine-Crimea is absolutely the same. No discrepancies, all for carbon paper. One video series, one text off-screen, the same commentators. And even the intonation is the same. How can it be? After all, the editorial board is different for everyone.

The editors are different, but the owners are alone. In Latvia, for example, I tell my Russian “democrats,” all commercial TV belongs to a Scandinavian media concern. Recently, this concern bought the Russian TV5 channel and drove out the entire newsroom, including lead journalist Andrei Mamykin. For what? And because they misunderstood the "policy of the party and the government." And Mamykin - what a scoundrel - refused to agree in advance on the questions of his interviews with the main censor of the channel ...

And yet, I tell my “democrats," the first channel was turned off from the air for a month in European Lithuania - in just 10 minutes historical plot about the events in Vilnius 1991. He, too, did not comply with the "politics of the party and government."

And also the Latvian Security Police not so long ago opened a criminal case on publicist Alexander Gilman. For what? And just for an article where he described family memories of the times of Stalin’s deportation of 1940. Do you have criminal cases for memoirs in Russia? Not yet? And here - excite. My Russian friends don't believe ...

From Democrat to Bandera - one step

And now the main question to the Russian "democrats": why do you always say "Putin declared war", "Putin annexed the Crimea", etc.? After all, as far as I know, 97% percent of Crimeans voted for joining the Crimea to Russia, while in Russia this act was supported by 95% of the population. This is not Putin, this is the people who unanimously decided to reunite ...

And the people are stupid, I get a response from my "democrats." Thanks guys! I did not expect to hear anything else from the real “democrats”. It is this answer that I constantly hear from my Ukrainian acquaintances of Bandera: “Whoever is not with us is the moskalskoe cattle!”. Who is not jumping - that Moskal. So you fraternized.

Ps Having already finished this article, I hear on the Latvian radio "Baltcom" an interview with the Moscow very democratic journalist Roman Dobrokhotov. Freedom and liberal - to the bone. He calls Putin a Hitler, conceals the Kremlin authorities — there’s already smoke! By the way, if he called OUR President Hitler, he would not get away with it so easily. In Latvia, unlike Putin’s bloody dictatorship, they are punished for insulting the president.

At the end of the conversation, the journalist of the radio "Baltcom" asked Democrat Dobrokhotov: "Is it right that the Russian TV channels were banned in Ukraine?" Does this correspond to such universal values ​​as freedom of speech? In Latvia, too, our nationalist radicals demand that Russian television be turned off ... ”

Well, what is there to add? Modern democrats are so harsh that give them free rein — they will shoot all those who disagree with them. After all, friends?