How to turn off the power from Russia: the vagaries of the United States against the energy security of Europe 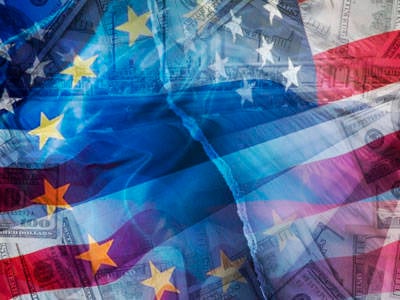 The supranational bodies of the EU decided not to limit the imposition of personal sanctions against a number of Russian officials and representatives of the business community. The theme of reducing Europe’s dependence on Russian energy supplies has intensified in the Brussels lexicon. Priority is given to reducing dependence on gas supplies from the east, because this is the most sensitive for Moscow topic of energy cooperation with the Old World. So far, everything is limited to the warning statements of European functionaries, the promotion of expert opinion with a European registration. But something on the "Brussels political kitchen" is still being prepared, and under the "sanctions sauce."


At the level of abstract reasoning, EU high-level officials suggest approaching the issue of replacing Russian gas from several directions. First of all, it points to the prospects of establishing supplies of liquefied natural gas (LNG) from the east coast of the United States. Great Britain and Poland once again stood in the pose of ardent Atlanticists, lobbying in the EU the question of buying American LNG. The political component of lobbying clearly prevails. It came to proposals to include the topic of North American gas supplies in the agreement on the Transatlantic Free Trade Zone being worked out between the US and the EU. Many Europeans prefer not to pay attention to the objective constraints of such a large-scale undertaking in relations between the US and the EU. Not that the advertised "shale revolution" in the United States is far from supplying competitively priced "blue fuel" to foreign markets, nor to the lack of adequate infrastructure for LNG supplies on the US Atlantic coast.

Causes wariness not taken by the British and Poles high rate of advancement of gas (and not only) US interests in the EU space. After London, Warsaw and Moscow have no illusions after the Crimea, and there should not be. The situation is quite different with the position of some of the continental EU members, which were most recently regarded as the closest and most consistent partners of the Russian authorities and domestic energy corporations. Recently, everyone was surprised by the statements of the head of Italy’s oil and gas company Eni, Paolo Scaroni. The first face of the partner company "No. 1" of the Russian gas corporation in Italy, which owns an 20 percent stake in the South Stream project, predicted the latter, literally, "a grim future." At the same time expressing the opinion that Italy "can live without buying gas from Russia." Just a few days earlier, Paolo Scaroni kept to a different line, emphasizing that "we need Russian gas every day. If we remain without it in the middle of winter, then we will have big problems."

South Stream was, to put it mildly, not among the favorites of the European Commission and individual EU members. Nowadays, in Brussels, it has become increasingly common to talk about the approaching "demise" of a large Russian energy project of supplying natural gas to European consumers along the bottom of the Black Sea. But to hear critical comments from the Italian partners, who quite recently could have been suspected of anything, but not in anti-Russian sentiments, was very strange. In the South Stream project, Italy was characterized by Gazprom top managers as the largest target market. The Italian Tarvisio point should take up most of the South Stream gas volume.

The management of Gazprom also noted the small chances of Russian competitors in the field of gas supplies to Europe. Neither Azerbaijan, nor Turkmenistan, nor Iran in the coming years will be able to enter the solvent market of the EU with their energy products, while making the Russian equivalent at least a kind of competition. Azerbaijani gas is intended to replace the retiring volumes of North African EU suppliers (Algeria and Libya). And also to provide Turkey with more comfortable conditions during periods of winter cooling. No more than that, they believe in Gazprom. The development of the second phase of the Azerbaijani Shah - Deniz field promises to supply to Europe up to 16 billion cubic meters of gas. With such a volume, Baku will not be able to make the weather on the European market, whose demand for gas over the past year amounted to about 550 billion cubic meters.

The issue of supplies of Turkmen gas depends entirely on the construction of the Trans-Caspian gas pipeline. There are no serious reasons to hope for laying a pipeline across the Caspian Sea during the upcoming 5-7 years. In addition, the real export opportunities of the Central Asian republic in the western direction do not seem to be absolutely verified. According to the forecasts of the Turkmen government, by 2016, the export of natural gas from the republic could reach 80,7 billion cubic meters. m, and to 2030-mu - 180 billion cubic meters. According to forecasts of foreign “appraisers”, in particular, from the International Energy Agency, by 2035, Turkmenistan will extract (note, only extract, and not export) no more than 138 billion cubic meters. m per year. Ashgabat’s plan for production in 2030 was raised to annual 230 billion cubic meters.

With Euroatlantists, Iran has a special история relationship. The last months have led to a noticeable improvement in the political climate between Tehran and the Western capitals. But until the complete settlement of mutual claims far. Europeans' hope for Iranian gas as a kind of "substitute" for Russian energy resources comes across not only the wall of persisting contradictions between the West and Iran in the Middle East and beyond. Tehran set a course for a qualitative breakthrough in its oil and gas industry, ensuring the growth of export supplies of oil and gas to a level that preceded the imposition of sanctions and higher. The emphasis is on attracting Western investment and technology, without which the Iranians will not be able to reach large volumes of external gas supplies in a short time. Natural gas consumption in Iran has doubled in 10 years: from 71 billion cubic meters. m in 2002 year to 140 billion cubic meters. m in 2012-m. Satisfying one’s own demand in energy resources does not contribute to increasing the export potential of Iran’s gas industry in the coming years.

For Europeans, the north-Iraqi seems to be even more elusive for gas imports. According to Euro-Atlantic plans, the most distant stage of expanding the gas supply base to Europe along the Southern Gas Corridor route (the total capacity of the projected Trans-Anatolian (TANAP) and Trans-Adriatic (TAP) gas pipelines) is the deployment of promising fields in Northern Iraq. It implies a three-stage output of the "Southern Gas Corridor" in full load mode. At the first stage, part of the European demand will be met by the production of Azerbaijani gas. Then, Turkmen gas will be injected into the pipe of the Southern Gas Corridor. And to bring the project to a level comparable to Russian supplies to Europe at the next, more distant stage, gas from the fields of Northern Iraq will allow. Such a phased arrangement of accents can be traced, for example, in the position of US energy diplomacy. Prior to his appointment as US ambassador to Azerbaijan, Richard Morningstar did a great job in promoting the idea of ​​the Southern Gas Corridor. For example, in November 2011 at the time of the meeting with Azerbaijani President Ilham Aliyev at that time, the special envoy of the US Secretary of State for Eurasian Energy Affairs Richard Morningstar expressed the opinion that the project should start with a smaller pipeline that can be expanded when new volumes of gas are available.

According to Gazprom representatives, by 2025, Europe’s demand for imported gas will be 145 billion cubic meters. m, and by the year 2030 will grow to 200 billion. In connection with the growth of European gas demand, the Russian corporation has previously expressed its willingness to “supply gas as much as Europe needs or wants.” At the end of last year, Gazprom sold 161,5 billion cubic meters of gas to the EU, closing up to 30% of the European market. The dependence of six EU countries on Russian gas supplies is estimated at 100%. These are Bulgaria, the Czech Republic, the three Baltic republics and Finland. The European "locomotives" depend on the supply of energy from the East to a lesser degree, but far from being comfortable for them (in terms of opposition to Russia around Ukraine). Germany covers up to 30% of its needs with the purchase of Russian gas, Italy - 38%.

The conclusion suggests one, no matter how depressing for European functionaries. Replacing Russian gas for Europe is theoretically possible after at least 10 years. But only at the cost of deepening political confrontation between the EU and Russia, the destruction of established economic ties, fraught for the EU labor market, its energy security with insurmountable challenges. Much will depend on the readiness of the largest economies of continental Europe to go on deprivation for the sake of a narrow in its content and resembling the whims of the “putting Russia in place” prompted from overseas. Are Germany, Italy, and other close economic partners of Russia ready to put the indicated goal into dogma, dooming themselves and others to years of confrontation? Which will be followed by not less difficult years of searching for ways to restore the previous economic relationship between Europe and Russia.