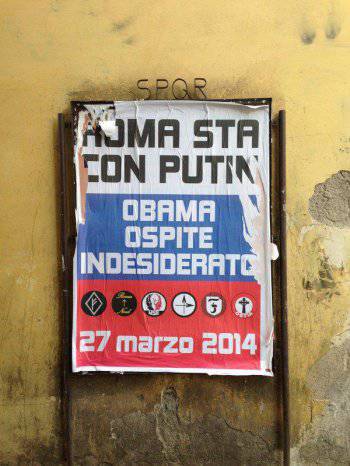 On the day of the arrival of the President of the United States throughout the Italian capital posters were posted “Rome with Putin. Obama is an uninvited guest. ” Their authors are movements that oppose Italy’s military and political dependence on America.


Traditionally, visits by all American presidents to Italy are characterized by two main factors: excessive security measures that paralyze Rome’s life for several days, and protests over Italy’s membership in NATO, and the presence of US military bases on its territory.

So it was this time. And, despite the fact that the media tried to present the two-day (26-28 of March) visit of the current US President as a triumph of friendship between the two countries, we could not get around the critical moments.

“Obama is a symbol of the worst American imperialism, imbued with external complacency and philanthropy, but which in fact responds to its opponents with wars, as happened with Libya, or supporting terrorism in Syria. Now it’s Ukraine’s turn and Europe’s separation from its natural partner, Russia, and this is something we cannot agree with, ”the opposition communiqué says.

The theme of Ukraine and Syria was one way or another present during the meetings between Obama and Pope Francis, Prime Minister Matteo Renzi and President of the Italian Republic Giorgio Napolitano.
The relationship between the White House and the Vatican can hardly be called cloudless. They are distinguished by a diametrically opposite approach to many moral and ethical topics.

In addition, the aggressive US policy in Iraq and Syria, the support of the Muslim Brotherhood Party in Egypt, had dramatic consequences for the Christian population in these countries.

Because of this, many experts predicted that the meeting of the American President with the head of the Roman Catholic Church would not be easy, but Pope Francis preferred not to go into open conflict, focusing on social problems and expressing concern at the ever-widening gap between the rich and the poor as a result of globalization. .

The meeting with Giorgio Napolitano undoubtedly brought a surprise to Barack Obama when the Italian president declared during a friendly conversation that “we cannot refuse the prospect of cooperation with Russia in overcoming numerous global challenges, such as fighting the threat of universal security, international terrorism and for the non-proliferation of nuclear weapons».

Recently, in Italy, the voices of those politicians and business representatives who oppose economic sanctions against Russia have finally been heard, warning that they can seriously hit the Italian economy, which is in a far from brilliant state. Exports to Russia today account for 2,57% of Italy’s GDP, but even more than the ability to export and import goods, Italian entrepreneurs are interested in investing in Russian business.

The serious problems that the Italian economy is experiencing now have led some intellectuals to once again doubt whether Italy should continue to unquestioningly follow the American military doctrine?

It did not go unnoticed that Obama expressed his concern over the decision of the Italian parliament to reduce the cost of armaments and, in particular, to refuse to buy American F-35 fighter jets. Matteo Renzi was compelled to assure the US President that Italy would fulfill her duties as a NATO member, and this gave rise to the popular journalist Marco Travallo to ask a rhetorical question: “Is Italy still an independent state or is it already a branch of America?”

The US military presence on the Apennine Peninsula opened another painful topic. No MUOS activists rallied to dismantle The Mobile User Objective System, consisting of four satellites and four ground stations, one of which was installed nearby. from the town of Nishemi in Sicily. This system does serious harm to human health and the environment, but Pentagon officials said it would remain in place.

The activists of the “No MUOS” movement were among those who organized pickets near the American embassy in Rome, calling Barack Obama “the Nobel Prize winner of the war”. Nearby, activists of the Stop TTIP movement, against the adoption of the Transatlantic Trade and Investment Partnership agreement on transatlantic trade and investment partnership, which is being discussed by representatives of the EU and the United States behind closed doors in the strictest secrecy, protested.

Barack Obama welcomes the creation of a single trading space on both sides of the Atlantic Ocean, but in reality this treaty, if adopted, will be a further attack on civil society in order to compensate financial institutions for losses from stock exchange speculation.
Among its objectives are the privatization of public services that manage water resources, energy and the social sector of the economy, a further attack on the rights of workers, the abolition of control over the movement of capital, the promotion of banking speculation and, most importantly, the de facto abolition of state autonomy in the economy and social sphere in favor of large corporations.

It is not difficult to understand that the treaty is diligently promoted into life by certain powerful lobbies with complete silence of politicians and official mass media, who represent those who protest against the neoliberalism policy, only as a handful of discontented people who only create inconvenience.

That is why recently the Internet has become a real “Samizdat”. The leader of the apolitical 5 Star Movement, Beppe Grillo, writes in her blog: “Parliament promotes its lies, and newspapers, communication media and television - its own. Obama has come to offer us his contraband, and we are all silent ... I want you to rebel! ”

Ctrl Enter
Noticed oshЫbku Highlight text and press. Ctrl + Enter
We are
A great interview with Sergey Lavrov: about Ukraine, Obama and IranMilitary reform as an integral part of the security concept of the Russian Federation: Systematic dynamic assessment
Military Reviewin Yandex News
Military Reviewin Google News
52 comments
Information
Dear reader, to leave comments on the publication, you must sign in.