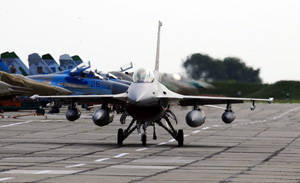 Against the background of the coup in Ukraine, few people paid attention to the fact that the air forces of the actually split country are not just experiencing a rapid decline, but in fact go into oblivion.

Since the collapse of the USSR in 1991, Ukraine has received a solid Soviet legacy: the division of military equipment left the newly formed republic of the CIS quite strong aviation potential. In terms of quantity, the combat aviation of Ukraine in 1992 was second only to the aviation of the USA, Russia and China, being the largest in Europe.

It is also worth noting that a significant part of the modern military airfields of the former USSR was located on the territory of Ukraine, where MiG-29 and Su-27 fighters were stationed, long-range Tu-22, Tu-95 and Tu-160 bombers. It was the Ukrainian airfields that at that time played the primary role in delivering a disarming strike to the NATO forces. The airbases in Mirgorod and Vasilkov, Melitopol and Belaya Tserkov, Priluki and Poltava, Mukachevo and Stryi - this is not a complete list of those who received the new aircraft in the first place. At the Saki airfield in the Crimea there is a complex of NITKA - a ground-based test aircraft simulator for training naval aviation pilots. It is a ground-based complex of ship-borne means of shortened take-off and landing of aircraft.

In 1992, three air armies were transferred to the Ukrainian Air Force (1100 combat aircraft):