Combat awards of the Russian Federation. Medal of Suvorov

April 1 2014
1
By a decree of the President of the Russian Federation of March 2, 1994, 3 new military medals were awarded in the country, which were awarded to servicemen of various military branches. The first such medal was the Suvorov medal, which was awarded to soldiers and officers of the Ground Forces. The great Russian commander Alexander Suvorov was the generalissimo of the land and naval forces, but a new award was created for the Navy in the new Russian award system. At the same time, pilots were also awarded this medal. aviation ground forces. Currently, this medal has been awarded to more than 60 thousand people.


The servicemen of the Russian army are rewarded with the Suvorov Medal for courage and personal courage, which were shown in defending the Fatherland and the state interests of the Russian Federation in combat operations on land, in combat duty and military service at maneuvers and exercises, and in carrying the protection of the state border of the Russian Federation. In addition, the award can be awarded for excellent performance in field training and combat training. The servicemen wear the Suvorov medal on the left side of the chest; if there are other medals in Russia, it is placed after the medal “For Courage”. At the same time, the award of the Suvorov Medal cannot be made posthumously, and the statute of the award excludes re-award. 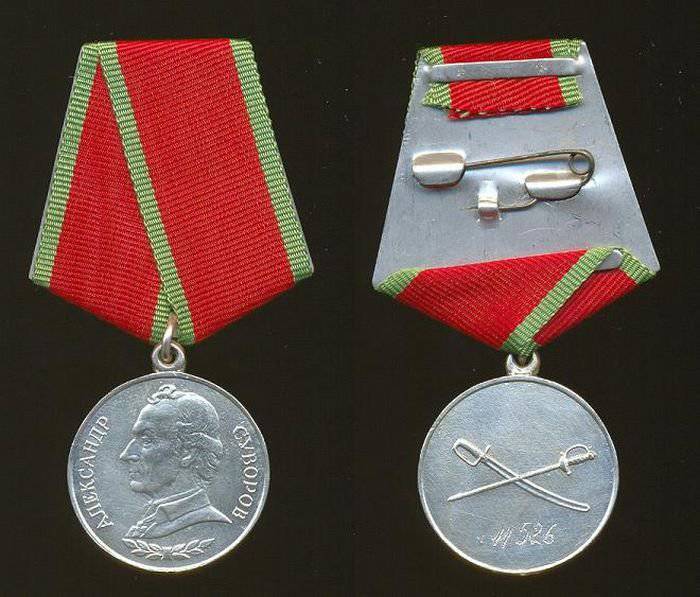 The Suvorov Medal is made of pure silver and has the shape of a circle, the diameter of the circle is 32 mm, on both sides of the medal there are convex sides. On the front side of the award there is a profile (turn to the left) bust image of the Generalissimo AV Suvorov. Along the upper edge of the medal is the inscription "Alexander Suvorov", made in embossed letters (all capital letters). In the lower part of the medal there was a relief image of laurel branches. On the reverse side of the award there was a relief image of intersecting sabers and swords, and under them was the ordinal number of the award.

With the help of a ring and an ear, the medal was attached to a standard pentagonal block, which was covered with a red silk moiré ribbon, the color of which was 24 mm. Along its edges were green stripes 3 each in width. When wearing a medal on a uniform, a strip was used with a tape width - 24 mm and height - 8 mm. Also for special occasions, as well as everyday wear, there is a special miniature copy of the award, which has a diameter of 16 mm.

It is not difficult to guess that the overwhelming number of awards with a medal destined for the ground forces occurred during two military campaigns in the Chechen Republic, as well as a reflection of the invasion of militants in Dagestan in 1999. From March 1994 of the year to June, 2000 of the year in Russia produced more than 20 of thousands of awards for servicemen who took part in the hostilities in the North Caucasus. By 2006, the number of such awards exceeded 60 thousands. At the same time, detailed statistics on the number of presentations of the Suvorov medal practically do not exist. Different sources provide quite contradictory information, so it can be said with confidence only that more than 60 thousand people were awarded this medal in Russia. 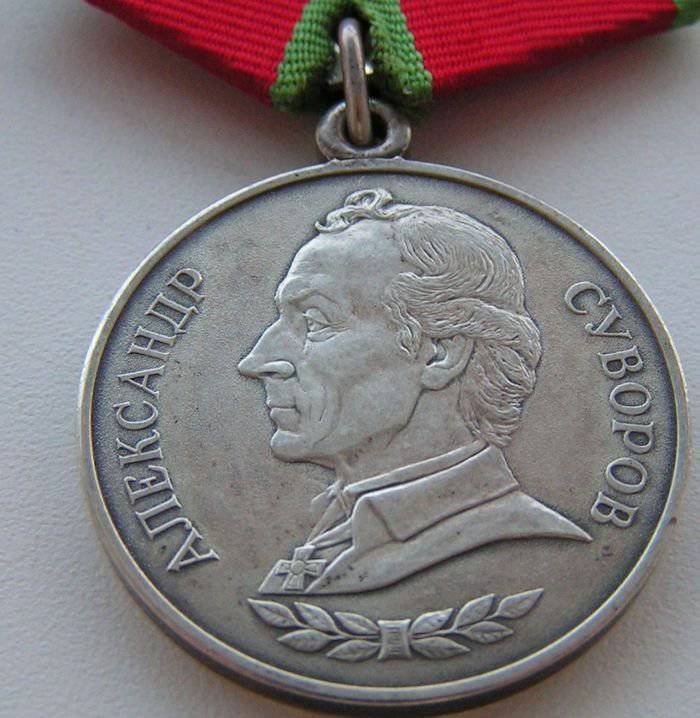 In this case, the Suvorov medal was awarded not only to those who took part in the hostilities in the North Caucasus. This state award was awarded to military personnel from the 202-th separate airborne brigade, who in 1999 made the famous march from Bosnia to Kosovo. Also this award was awarded to the participants of the armed conflict of August 2008 of the year in South Ossetia. Despite the fact that the award has a land status, there are facts awarding it and the Russian sailors. So 13 June 2009, the Russian President Dmitry Medvedev presented the Suvorov medals to the Navy servicemen, who performed the task of countering piracy and ensuring the safety of maritime navigation off the coast of Somalia.

The first Suvorov medal was awarded in July 1995 (the exact date is unknown). The sailors Vladimir Kish and Oleg Sidorov from the Baltic Marine Corps brigade were awarded the medal fleet, both received a medal for their business trip to Chechnya. The last award of the Suvorov Medal occurred on February 20, 2014. The medal was awarded to Lieutenant Colonel Sergey Platonov, commander of an engineer and combat engineer battalion, who organized the evacuation of citizens from the flooded village of Ivanovka, located in the Amur Region during a severe flood that hit the Russian Far East in autumn 2013.

One of the most famous soldiers awarded the Suvorov Medal is Colonel Nikolai Sayinovich Maydanov, commander of the 325-th Separate Combat Transport Helicopter Regiment. He was awarded the Suvorov Medal for participation in the counter-terrorist operation in Dagestan. During this operation, he made a large number of combat missions and successfully landed 6 tactical assault forces. Unfortunately, this military pilot was killed. 29 January 2000, he was mortally wounded during a military operation in Chechnya. The pilot died in the cockpit of his helicopter, until the very last moment fighting for the lives of people on board and trying to land the helicopter. In the same year he was posthumously awarded the title Hero of Russia. 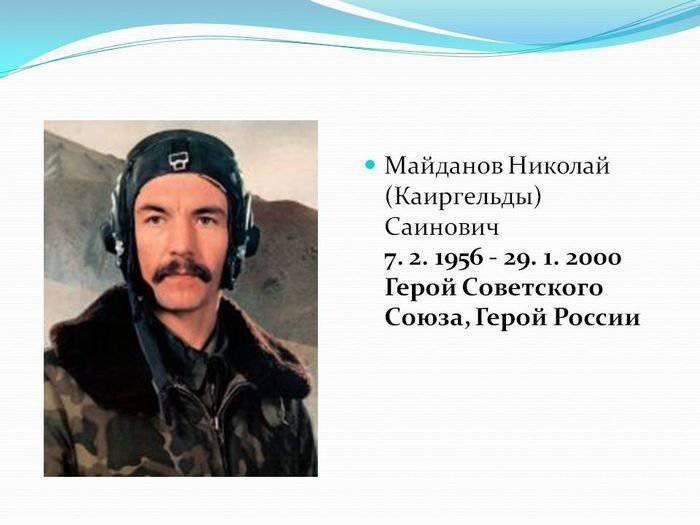 It should be noted that Nikolai Maidanov is only one of four people who were simultaneously awarded the title Hero of the Soviet Union and the title Hero of the Russian Federation, and the only one to whom both titles were awarded for feats accomplished on the battlefield. He received the title of Hero of the Soviet Union for fighting in Afghanistan in 1988. In total, during his business trips to Afghanistan, the celebrated pilot made 1250 combat missions, personally took the injured 85 from the battlefield, transported 1000 paratroopers and 100 tons of various cargoes. The total flight time of Maydanov was then 1100 hours.

Ctrl Enter
Noticed oshЫbku Highlight text and press. Ctrl + Enter
We are
Congratulations on the 285 anniversary of the birth of the Great Russian commander Alexander Vasilyevich Suvorov!Military orders and medals of the Soviet Union. Medals of the series "For Defense"
Military Reviewin Yandex News
Military Reviewin Google News
1 comment
Information
Dear reader, to leave comments on the publication, you must sign in.