April 1 2014
50
At the end of 2012, the state tests of the self-propelled anti-tank missile complex "Sturm-SM", created by the Kolomna engineering design bureau, were completed. According to some information, preparations are currently being completed for adopting a new system for the armament of the army. The construction and supply of new equipment with guided missile weapons to the troops will increase the potential of the ground forces. New anti-tank complexes "Sturm-SM" will give the opportunity to deal with armored vehicles and fortifications with greater efficiency. 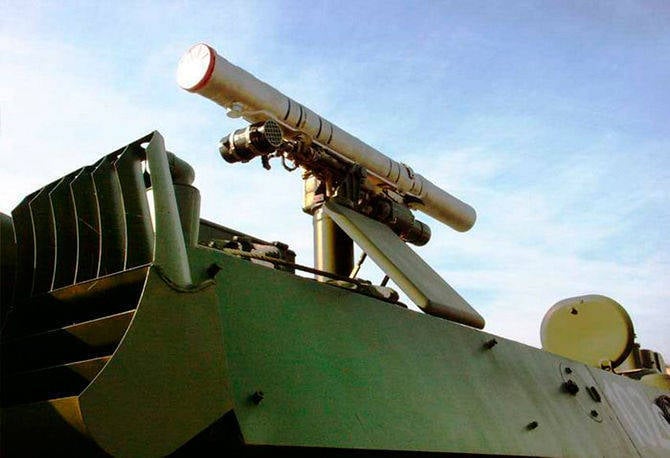 The project of a new anti-tank missile system was developed by Kolomna designers to equip the armed forces with a modern system capable of effectively destroying various types of targets. The ATCM "Sturm-SM" uses an updated complex of electronic equipment, providing the ability to use weapons at any time of the day and in any weather conditions, as well as a new rocket with two control systems. In addition, the upgraded anti-tank complex can be mounted on various platforms, from self-propelled tracked chassis to a boat or a ship.

The main objective of the modernization, the result of which was the new ATGM of the Sturm family, was to ensure that the systems could be used regardless of the time of day or weather conditions. For this purpose, a surveillance and sighting system with a television and thermal imaging channel was introduced into the complex of radio-electronic equipment made on the basis of the Shturm-S ATGM equipment. Using this system, the operator of the complex can monitor the situation and direct the missile at the target.

The second major innovation in the anti-tank complex "Sturm-SM" was the updated missile control equipment. To use the missile system on various platforms, the ammunition received an additional control system. The 9М120-1 Attack missile uses radio-command and laser-beam control systems, depending on the situation.

All units of the self-propelled anti-tank missile system “Sturm-SM” are mounted on the chassis of the MT-LB multi-purpose tracked vehicle. On the site of the commander of the machine is mounted a set of equipment necessary to control all systems. On the frontal part of the base machine, in front of the commander's workplace, a rotary unit with optoelectronic equipment is installed, designed to search for targets and missile guidance. Equipment for work with rockets is installed in the cargo compartment of the MT-LB vehicle. Automatics is responsible for supplying ammunition to the launcher and raising the latter to the combat position. On the launcher there are attachments for the rocket transport and launch container. For the supply of ammunition used drum with 12 cells for transport and launch containers with missiles. 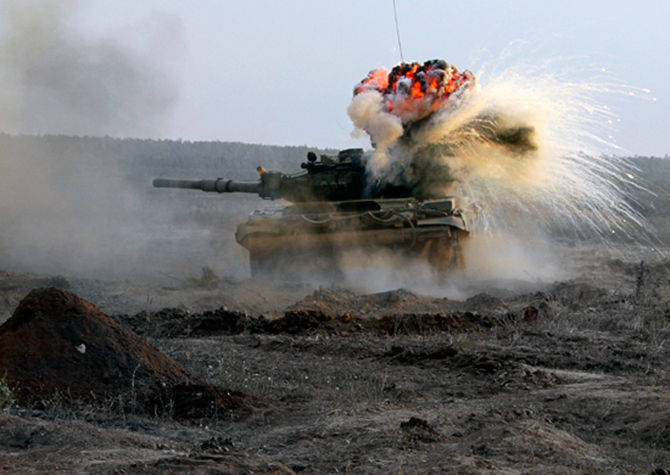 According to official information, the modernized Sturm-SM anti-tank systems can destroy various targets at ranges up to 6 km. The 9М120-1 guided missile is equipped with a solid-fuel engine and is capable of flying at speeds of the order of 400 m / s. Control of the rocket in flight is carried out by radio or by means of a laser-beam system. Receivers of radio and laser radiation are located in the tail of the rocket.

When creating a new rocket, the need to effectively destroy various types of targets was taken into account. For this reason, the “Attack” guided missile of a new modification can be equipped with three types of combat units. A tandem cumulative warhead is designed to destroy enemy armored vehicles; for the defeat of manpower is proposed to use fragmentation; and for attacking low-speed low-altitude air targets, a core warhead was created.

From their predecessors ATGM "Sturm-SM" took over a few positive features. The original automatic supply of ammunition to the launcher in combination with the high speed of the missile allows an experienced gunner to make up to 3-4 launches per minute. The use of a narrow radio beam control provides high noise immunity of the complex. The semi-automatic guidance system allows the operator of the complex to control the rocket until it hits the target, although it imposes certain restrictions on the use of the system in real combat conditions.

The use of old developments in combination with new ideas allowed Kolomna designers to ensure the superiority of the Shturm-SM anti-tank systems on previous systems of the family. Due to the use of a dual missile control system and through the use of an optical-electronic surveillance and guidance system, greater flexibility of use is achieved in comparison with the previous Sturms. In addition, it is possible to use not only the self-propelled land chassis, but also on other platforms.

Anti-tank missile system "Sturm-SM" has not yet been adopted. Nevertheless, it has already passed state tests for quite a long time and, therefore, is likely to be put into service as soon as possible.

Ctrl Enter
Noticed oshЫbku Highlight text and press. Ctrl + Enter
We are
The history of the development of ATGMHistory of anti-tank weapons - ATGM
Military Reviewin Yandex News
Military Reviewin Google News
50 comments
Information
Dear reader, to leave comments on the publication, you must sign in.