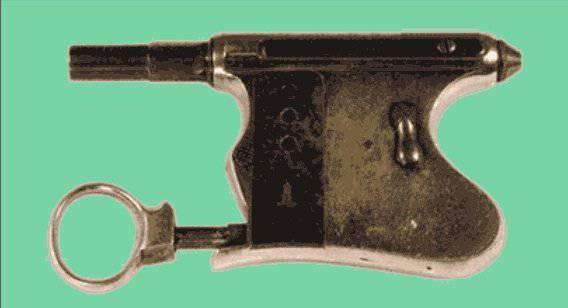 18 February 1866 was born in Cetllo Tribuzio in the south of Italy in the city of Voltri. Since childhood, he worked with his father weapons, he has several patents of various types of weapons: pistols, shotguns, mechanisms for weapons, in Turin Tributsio had his own gun shop. 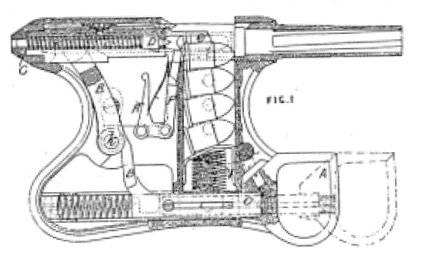 Tributsio received the first patent for his 17 September 1889 “gun - zipper”, he was valid for three years with the right to extend it further, in England, the engineer patented the second model in 1890, and received the patent in Italy in 1891. As the first invention, the “bolt mechanism for rifles and pistols” was indicated, although no one has seen Tribzio rifles with such a bolt. Actually, there are hardly any pistols with such a shutter mechanism as described in the patent. In the original version, the trigger was a vertical lever, similar to the lever of a Rushus pistol, a patent for which was issued a few months earlier, 19 April 1889 of the year. It was a time when the guns "expanders", the mechanism of which was based on the clenching and unclenching of the palm, were very popular all over the world due to their reliability and compactness. 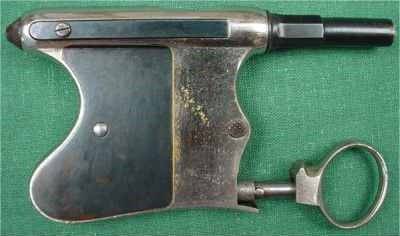 Tributsio did not try to copy the Rushus pistol, if you look at the design, it is obvious that the mechanisms of the pistols have nothing in common. 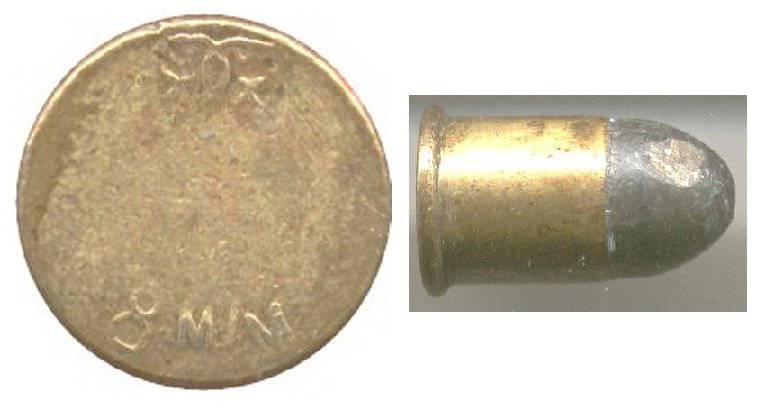 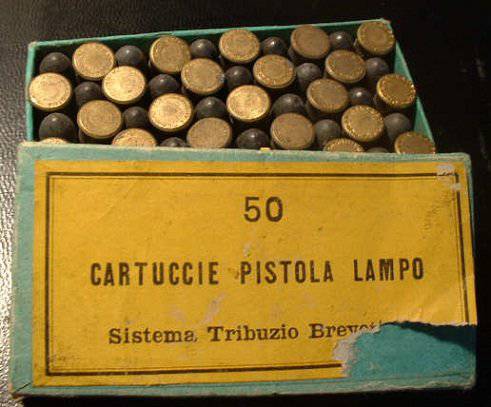 The mechanism of the pistol was simple and original and acted as follows: when the trigger ring moved backward, the lever, which was connected with the trigger ring by means of a hinge, began to rotate backward. The lever, in turn, was connected to the bolt. When the ring was pressed (due to the specific location of the ring, it was more convenient to press with the index or middle finger) the bolt moved forward, filling the cartridge into the chamber, filling the magazine. 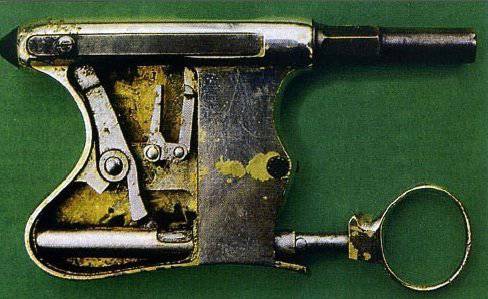 After locking the barrel, it was descended with the trigger lever. The drummer was set in motion by a coil spring (in the original version of the weapon the spring was plate-shaped). The trigger lever after a shot under the influence of the central spring returned to its original position, the shutter moved with it to its original position. When the valve was moved backward, the ejector mechanism that was connected to it first pulled the sleeve from the chamber, and then threw it through the window in the upper part of the frame.

Two springs, located on the sides of the case, pressed the cartridges and prevented them from leaving the store. Pistol magazine vertical, single row with 5 ammo capacity. Each time the bolt moved forward or backward, the springs were squeezed out, consistently sending the new cartridge into the chamber and removing the spent cartridge case. The cartridges were inserted into the store one by one or five each, using special brackets. 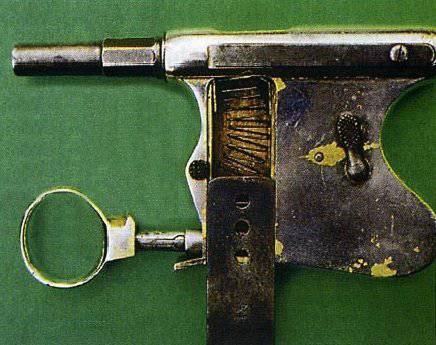 Located in front of the frame of the pistol peppered bolt with grooved edges, blocking the descent, served as a fuse. On the right side of the frame, a plate is held by a screw with an unusual shape. When turning the screw clockwise half a turn, the plate was removed, opening up access to the pistol's mechanisms for cleaning, lubricating and maintaining it. The magazine cover, located on the left side of the weapon frame, has three openings to control the presence of cartridges in the magazine. The cover of the store was removed when you click on its latch. The pistol was usually supplied with a case, usually made of leather.