The Songmi Carnage is a symbol of the war crimes of our time. 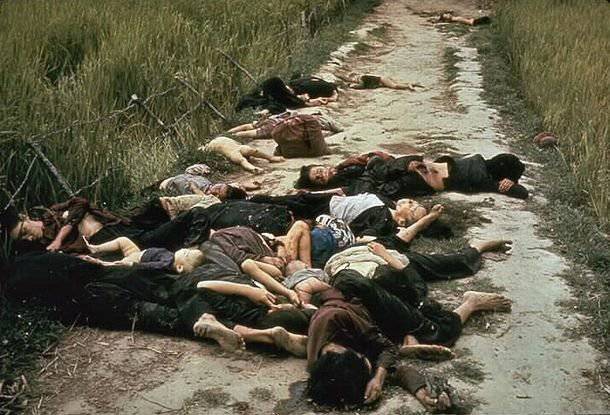 The massacre, organized by the Americans in the Vietnamese village, can only be compared with the actions of the Nazis during World War II. However, this crime against humanity has not yet been properly assessed in American society, and the perpetrators have not received the deserved punishment ... 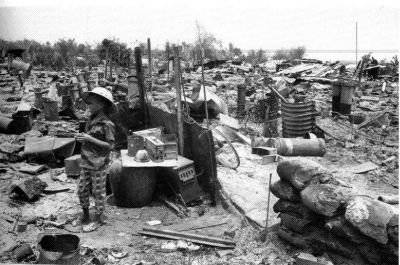 In March 1969, US President Nixon and 30 US congressmen and officials received a letter from veteran Ronald Raidenaura. In them, the former GI talked about the total destruction by American soldiers of civilians in one of the Vietnamese villages. Of course, the recipients saw in the letter the post-traumatic delirium of the veteran and sent them to the basket. However, it was not possible to completely hide the horrible truth.
The commission headed by Lieutenant-General William Pierce, the former commander of the 4 Infantry Division and the First Field Corps in Vietnam, took up the investigation of the monstrous crime. During the four months of operation, the commission interrogated about 400 people. The results were shocking: sophisticated murders, gang rapes, the unreasonable extermination of civilians turned out to be on the conscience of American soldiers ... And all this was covered by military commanders of various levels. In addition to everything else, photographs of Ronald Häberley, an information department of the American Army, swam in, in which the most horrific details of the massacre were documented in color.

The Pierce Commission found the following details. 16 March 1968, the US Army conducted an anti-partisan operation called Muscatine in the province of Quangangai (Sonntin district). The 1 battalion of the 20 infantry regiment of the American 23 infantry division was assigned to destroy the partisans in the area. While combing the jungle, the soldiers of the battalion tried to destroy the Viet Cong, but they were elusive, and at the same time they constantly inflicted damage on the enemy with the help of booby traps and sudden strikes. The Americans were furious. They believed that local peasants were hiding vetkogovtsy in their homes, and therefore decided to scour the neighboring villages belonging to the rural community of Songmi.

The commander of the first battalion, Captain Ernest Medina, received from the command of the operational group Barker the task of clearing the villages of a possible enemy. Medina, enraged at the impossibility of getting even with the enemy in open battle, ordered the soldiers not to be shy - to burn houses and destroy cattle.

On the morning of March 16, on 7.30, the villages of Milay, Bintei, and Mihe were bombarded with white phosphorous high-explosive and incendiary shells. Getting on the skin, phosphorus burned it, and then, interacting with the subcutaneous fat, literally burned the victim from the inside.
Then, around 8.00, helicopters hovered on the outskirts of the villages, from which American military mouths B ("Bravo") and C ("Charlie") fell. Watering the streets with automatic fire weapons and machine guns, the soldiers destroyed everyone, regardless of age and gender. In an effort to destroy those who tried to hide, they threw grenades into wells and other shelters, set fire to buildings. Moving from the hut to the hut, the Americans grabbed frightened women and children by the hair, shouting "Viet Cong?" Vietcong? ”, And, without waiting for an answer, killed them in cold blood. Those who tried to escape were immediately shot in the back. Groups of twenty-five to forty people, hiding in roadside ditches, were shot from automatic weapons.

It is noteworthy that the soldiers destroyed not only the peasants, they killed the animals - cows, pigs, even chickens. After them there was nothing left alive.
Going into a rage, the soldiers tried to show imagination. So private Allen Boyce, stabbed the old man with a bayonet in the chest, and then shot him in the neck. He then shot another man and threw him into the well, hurling a grenade after him. 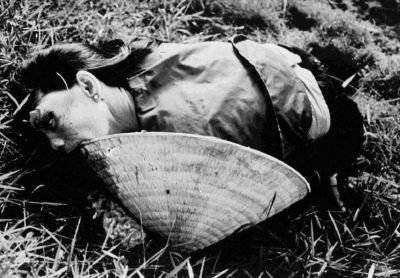 About fifty residents of the village of Milay were herded by soldiers of the Charlie company to one of the ditches. Here, the Americans raped several young women. Then, on the orders of Lieutenant William Kelly, the commander of the 1 platoon, all these people were shot. According to one version, shortly before the shooting, Captain Ernest Medina contacted Kelly by radio and asked about the reasons for the delay in the advancement of his company. Kelly replied that they had stumbled upon a group of about sixty civilians. “Take care of them,” Medina ordered. After that, Kelly built the Vietnamese and from a distance of ten steps with the help of two of his subordinates shot them with a machine gun. Then the executioners finished off those who showed signs of life with control shots.

About a hundred more were killed by the Charlie company in the village of Bintei. In the next village, Mikhe, the Bravo company mercilessly destroyed about 90 people. Almost everywhere, American soldiers participated in the rape, cut off the ears of the peasants, removed the scalps, and released the insides to their victims.

What he saw caused horror in the ranks of the American soldiers themselves. One of them shot himself in the leg. The other, the helicopter pilot Hugh Thompson, who provided cover for the operation, put his car near a group of peasants and ordered the gunner to protect them from the American soldiers who were mad with blood. Thus, the pilots managed to save 12 people, but hundreds of other victims of the massacre were much less fortunate.

On the same day, Captain Medina sent a report to the brigade headquarters that 128 enemy soldiers were killed in the battle, while civilians were caught in the crossfire and about 20 people were killed. In the headquarters the captain was taken to the word.

The report of the Peirce Commission recommended that dozens of servicemen be found criminally liable for perpetrating rape, murder, and conspiracy to hide the truth. Further events were a clear demonstration of the “best in the world” US judicial system.

Initially, 80 US troops were involved in the Songmi case, of whom 25 was indicted. But before the military tribunal appeared only six people. Among them there was not a single officer from among those who planned the operation or carried out the management of it. Captain Medina, who called his soldiers for revenge, was acquitted because he claimed that he was on the edge of the village and did not know what was happening. He stated that when he arrived at the scene around 10 in the morning, only the dead remained there. Meanwhile, there were witnesses who saw Medina in a village at 9 hours, in the midst of a massacre.

During the hearings of participation in a closed meeting of the House of Representatives Committee on Armed Forces, Hughes Thompson, the helicopter pilot who saved the Vietnamese peasants, was also interrogated. He was subjected to sharp criticism. Committee Chairman Mendel Rivers said that if someone should be tried for participating in the events at Songmei, it should be Thompson - for threatening to use weapons against compatriots. Rivers tried unsuccessfully to bring Thompson to justice. After about stories Thompson became known to the public, he began to receive anonymous calls with threats, to his porch threw dead mutilated animals.

Finally, after all the trials, a “switchman” was assigned to them was Lieutenant William Kelly. Too obvious was his direct order to kill the inhabitants of the village of Milay. During the trial of Kelly, his defense was based on the fact that the lieutenant carried out the order of the commander. 29 March 1971, Kelly was convicted of murdering an 22 man and sentenced to life penal servitude. But even this sentence was never executed. 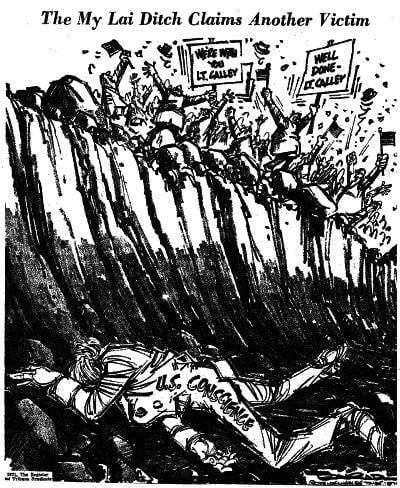 Thousands of telegrams flew to the White House from patriotic citizens in defense of Kelly. Many Americans hung their “Freedom for Kelly!” Tables on the bumpers of their cars. Several state legislatures adopted resolutions calling for the release of Kelly. Opinion Research Corporation in April 1971 conducted a survey, according to which 78% of Americans negatively accepted the decision of the court, 51% believed that President Nixon should pardon Kelly, and 28% demanded that his sentence be reduced. The President of the United States could not help but hear the voice of the voters. In August, 1971-th life penal servitude for a war criminal was replaced with a 20-year term, and a little later, by special order of US President Richard Nixon Kelly, was completely transferred from prison to house arrest in Fort Benning (GA). Then his sentence was reduced several times. Finally, in November 1974, Kelly was pardoned and released.

Now William Kelly lives in the state of Georgia, in the town of Columbus, where he works in a jewelry store. Apparently, the killer of twenty-two innocent people feels good. Just like Captain Medina. Just like hundreds of other executioners of the Vietnam War.