The myth of the barrage during the Great Patriotic War

July 18 2013
156
From the time of the Khrushchev's “thaw”, the myth of the barrage detachments of the NKVD was born, who used machine guns to shoot the retreating units of the Red Army. After the collapse of the USSR, these nonsense blossomed.


In addition, supporters of this lie also argue that most of the population of the USSR did not want to fight; they were forced to defend the Stalinist regime "under the fear of death." By this they insult the memory of our valiant ancestors. 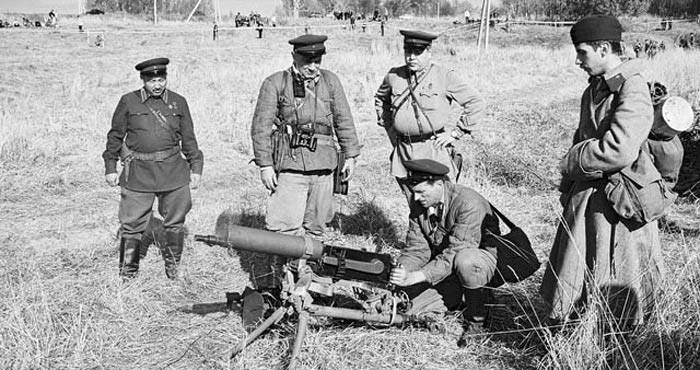 The concept of a detachment is quite vague - “a permanent or temporary military unit created to perform a combat or special mission.” It is also suitable for the definition of "special forces".

According to the directive, mobile control and barrier detachments were organized; they were to detain deserters, suspicious elements at the front line. They received the right of preliminary investigation, after which the detainees were transferred to judicial authorities.

In July, the NKVD and the NKGB were again united in 1941, the bodies of the Third Directorate of NGOs were transformed into special departments and transferred to the NKVD subordination. Special departments received the right to arrest deserters and, if necessary, to shoot them. Special departments had to fight spies, traitors, deserters, saboteurs, alarmists, and cowards. By order of the NKVD No. 00941 of 19 in July 1941, separate infantry platoons were created for special divisions and corps, and for special divisions of armies - companies, for fronts - battalions, they were staffed by NKVD troops.

These units and became the so-called "protective units." They had the right to organize a barrage service in order to exclude the flight of deserters, to carefully check the documents of all military personnel, to detain and detain investigators (during 12 hours) and to transfer the case to the military tribunal. To send laggards in their units, in exceptional cases, for immediate restoration of order at the front, the head of the special department received the right to shoot deserters.

In addition, the barrage detachments were to identify and destroy the enemy's agents, to check those who had escaped from German captivity.

Among the everyday tasks of the barrage was the fight against bandits. Thus, in June 1941, a detachment of troops was formed during the third division of the Baltic Fleet - it was a maneuverable company on vehicles, reinforced by two armored vehicles. He acted on the territory of Estonia. Since there were almost no cases of desertion in the area of ​​responsibility, the detachment with a group of operatives was thrown into the fight against the Estonian Nazis. Their small gangs attacked individual servicemen on the roads, small units.

The actions of the detachment noticeably reduced the activity of Estonian bandits. The detachment also participated in the “sweeping” of the Virtsu Peninsula, which was liberated in mid-July 1941 by the counterattack of the 8th Army. On the way, the detachment met a German outpost, defeated it in battle. He carried out an operation to destroy the bandits in metro Varla and the village. Tystamaa in the Pärnovsk district, destroyed the counter-revolutionary organization in Tallinn. In addition, the detachment participated in intelligence activities, having thrown three agents behind the enemy lines. Two returned, they figured out the location of German military facilities, dealt a blow to them aviation Of the Baltic fleet.

During the battle for Tallinn, the squad not only stopped and returned the fleeing, but he himself held the defenses. 27 was especially difficult in August, some units of the 8 Army fled, the detachment stopped them, a counterstrike was organized, the enemy was rejected - this played a decisive role in the successful evacuation of Tallinn. During the battles for Tallinn, more than 60% of the squad personnel and almost all the commanders died! And these are cowardly scum, shooting their own?

In Kronstadt, the detachment was restored, and from September 7 he continued to serve. Special departments of the Northern Front also fought with the bandits.

By the beginning of September 1941, the military situation was again sharply complicated, so the Headquarters, at the request of General A.I. Eremenko, commander of the Bryansk Front, allowed the creation of detachments in those divisions that proved to be unstable. A week later, this practice spread to all fronts. The number of units was one battalion per division, company per regiment. They obeyed the division commander and had vehicles for movement, several armored cars and tanks. Their task was to assist commanders, maintaining discipline and order in units. They had the right to apply weaponto stop the flight and eliminate the initiators of panic.
That is, their difference from the detachments at the special departments of the NKVD, which were created to combat deserters and suspicious elements in the fact that army units were created in order to prevent the unauthorized flight of units. They were larger (a battalion for a division, not a platoon), they were completed not from the NKVD fighters, but from the Red Army men. They had the right to shoot the initiators of panic and flight, and not to shoot the runners.

According to 10 on October 1941, special departments and detachments detained 657364 people, of whom 25878 people were arrested, of which 10201 people were shot. The rest are again sent to the front.

Defensive squads also played a role in the defense of Moscow. In parallel with the protective divisional battalions, there were detachments of special divisions. Similar units were also created by the territorial NKVD bodies, for example, in the Kalinin Oblast.

The Battle of Stalingrad

In connection with the breakthrough of the front and the output of the Wehrmacht to the Volga and the Caucasus, 28 July 1942 of the year came the famous order number XXUMX NGOs. It was prescribed to create in the armies of 227-3 detachments (5 fighters in each), to put them in the immediate rear of unstable parts. They also received the right to shoot alarmists and cowards to restore order and discipline. They submitted to the Military Councils of the armies, through their special departments. The units were headed by the most experienced commanders of special departments, detachments were provided with transport. In addition, defensive battalions were restored in each division.

By order of the People's Commissariat of Defense No. 227 on October 15, 1942 was created by the 193 army detachment. From 1 August to 15 in October 1942, these detachments detained 140755 from the Red Army. 3980 people were arrested, of whom 1189 people were shot, the rest were sent to the punishment unit. Most of all arrests and detentions were on the Don and Stalingrad fronts.

Barrier squads played an important role in restoring order, they returned to the front a significant number of troops. For example: 29 August 1942, the headquarters of the 29 th rifle division was surrounded (due to the breakthrough of German tanks), the units, losing control, retreated in panic. The barrage detachment of Lieutenant GB Filatov stopped running, returned to defensive positions. In another part of the front of the division, the detachment of Filatov was stopped by an enemy breakthrough.

September 20 Wehrmacht took part of Melikhovskaya, the consolidated brigade began an unauthorized retreat. The defensive squad of the 47 Army of the Black Sea Group of Forces brought order to the brigade. The brigade returned to the position and, together with the detachment, rejected the enemy.

That is, the detachments in critical situations did not panic, but put things in order and themselves fought the enemy. 13 September The 112-Infantry Division, under the blow of the enemy, lost its position. The detachment of the 62 Army, commanded by State Security Lieutenant Khlystov, fought off enemy attacks for four days and retained the line before reinforcements arrived. 15-16 September, the detachment of the 62 Army was fighting for two days in the area of ​​Stalingrad railway station. The squad, despite its small size, repulsed the attacks of the enemy and he himself counterattacked and passed the frontier in the integrity of parts of the approaching 10 th infantry division.

But there was also the use of detachments not intended, there were commanders who used them as line units, because of this, some units lost most of their squads and had to be re-formed.

In the course of the Battle of Stalingrad there were three types of detachments: the army, created by order No. XXUMX, the rebuilt divisional battalions, and small detachments of special divisions. As before, the overwhelming majority of the detained fighters returned to their units. 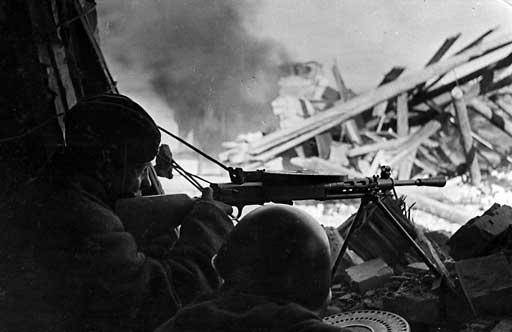 5 July 1943, the Wehrmacht launched its offensive, some of our units faltered. Detachments and here fulfilled their mission. From 5 to 10 in July, detachments of the Voronezh Front detained an 1870 man, arrested an 74 man, and the rest were returned to their units.

In total, the report of Major General A. Vadis, Chief of the Counterintelligence Directorate of the Central Front, from 13 in August 1943, indicated that an 4501 man was detained, of which he was sent back to the 3303 unit.

October 29 1944, by order of Commissar of Defense Joseph Stalin, the detachments were disbanded due to a change in the situation at the front. Personnel joined the rifle units. In the last period of their existence, they no longer acted in their profile - there was no need. They were used in the protection of staffs, communication lines, roads, for combing forests, personnel were often used for logistical needs — by cooks, storekeepers, clerks, and so on, although the personnel of these detachments were selected from the best fighters and sergeants awarded with medals and orders, who had a great combat experience.

Summarize: detachments performed the most important function; they detained deserters and suspicious persons (among whom were spies, saboteurs, agents of the nazis). In critical situations, they themselves engaged in battle with the enemy. After changing the situation on the front (after the Battle of Kursk), the barrage detachments actually began to serve as commandant companies. To stop the runners, they had the right to shoot over the heads of the retreating, to shoot the initiators and wind up before the line. But these cases were not massive, only individual. There is not a single fact that the fighters of the barrage detachments shot to kill on their own. There are no such examples in the memoirs of front-line soldiers. In addition, they could prepare an additional defensive line in the rear to stop the retreating and so that they could gain a foothold on it.

Ctrl Enter
Noticed oshЫbku Highlight text and press. Ctrl + Enter
We are
Our memory. The power and greatness of the locomotiveThe truth about barrage units (part of 1)
Military Reviewin Yandex News
Military Reviewin Google News
156 comments
Information
Dear reader, to leave comments on the publication, you must to register.