Why do the Swedes again rush to Poltava 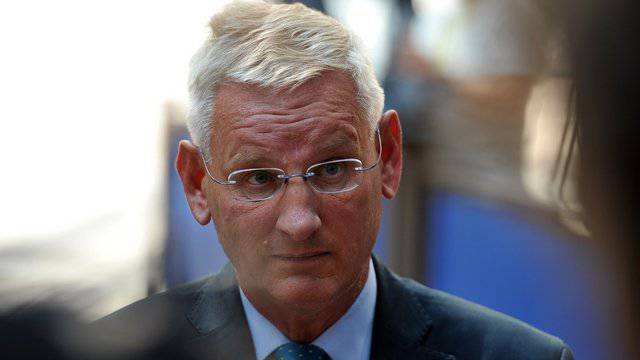 By forcefully signing with Kiev the political block of the Association Agreement with the European Union, Brussels is trying to turn Ukraine into a NATO satellite hostile to Russia, and at the same time into an open market for Western goods without the prospect of joining the EU. A lot has been written about the role that the West assigns in the Ukrainian direction to Poland, much less was said about the role of another country serving as a conductor of Western interests in Eurasia - Sweden. The Swedes are closely interested in Karelia, the Kola isthmus, the islands of the Gulf of Finland, their mineral and forest resources, and are aimed at countering Russia's plans in the Arctic. Work on the Russian direction is carried out through:

a) the Finnish-speaking citizens of Finland, who are closely associated with government structures and professing anti-Russian views; one of them, Mikael Storsjo, editor of the Kavkaz Center website and chairman of the board of the Pro-Caucasus association, was convicted of illegally transporting terrorists across the border;

Breaks to Ukraine and the Swedish bank capital. Sweden put forward the Eastern Partnership plan together with Poland, since it is well aware of the interest of its banks in the financial colonization of the territories of Ukraine. In the united ranks with the Swedes, there are US insurance and pension funds, which are the most solid source of funding for Swedish banks.

The development scheme of the Ukrainian territories has already been run in the Baltic States. According to it, Swedish and other representatives of the North European financial capital with the help of aggressive lending at the beginning of the 2000-s were “warmed up” by the critically ill Baltic economy. And then they got financial control over them and secured a steady profit in the form of payments on loans and interest from them for many decades to come. Thanks to the “Swedish scheme”, manufacturers of goods and services of the European Union have been successfully selling their products on the Baltic market for more than a decade and have firmly established themselves in the Baltics, which, among other things, has become a paradise for “sex tourism” from Europe.

At the same time with the banksters, the Swedish ultra-right extremists are also looking towards Ukraine. Members of the right-wing extremist organization “Youth of the North” (Nordisk Ungdom) collect funds for “free Ukraine” and organize support groups for Ukrainian like-minded people in social networks. From the beginning of March of this year, militants of the extremist "Swedes Party" (Svenskarnas Party) began to arrive in Kiev to support the Ukrainian neo-Nazis. Official Swedish authorities are looking at this landing through the fingers.

However, the key figures of the Swedish offensive on Russia through Ukraine are not right-wing extremists, but people like the head of the Swedish Foreign Ministry, Carl Bildt, who announced a “package of radical economic reforms” for Ukraine already on the day of the February coup in Kiev. This European official is one of the authors of the Eastern Partnership project and at the same time a representative of Stockholm in the informal coalition Sweden-Poland-Lithuania, which is putting pressure on Ukraine in the most active way and opposing the Eurasian integration project.

The Foreign Ministry and the Swedish authorities have always stressed that their country has been supporting the “policy of armed neutrality” for 200 for years. And all the troubles come from the eternally aggressive Russia. It is logical to explain how for centuries neutral Swedes could “fight off Russian aggression,” for example, near Poltava, to any person familiar with geography is simply impossible.

Meanwhile, at the height of Kiev's Maidan in December 2013, Swedish television made extremely interesting documents publicly available, according to which the Swedish special services FRA (Forsvarets radioanstalt) is the “lead partner” of the US special services in espionage against Russia. “The FRA has provided the United States with a unique set of high-priority Russian targets,” says, for example, 18 in an April 2013 document. “Thank Sweden for the work on the Russian goals, which it continues to implement,” says another document, “and emphasize the main role of the FRA as a leading partner in working with Russian goals, including the Russian leadership.”

In response to such exposures, Defense Minister Karin Enstrom and other official representatives of Stockholm spoke in the sense that, they say, they spied for Russia in the interests of the United States and we will spy, because all such actions “are carried out within the framework of legislation, under strict control and under the supervision of parliament "! At the same time, as stated by the British journalist Glenn Greenwald (with his help, Edward Snowden’s revealing documents hit The Guardian pages at one time) to the Swedish television channel Sveriges Television, the United States unconditionally dictates to Sweden the conditions of joint work in the field of espionage.