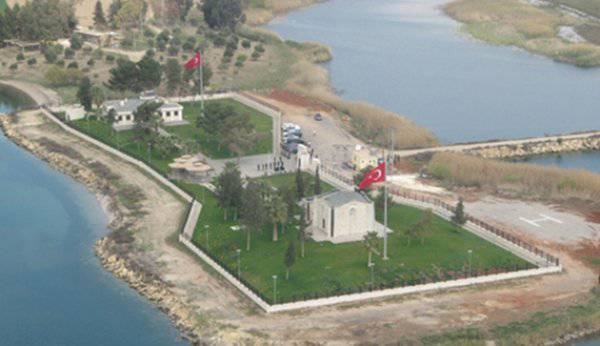 An unprecedented scandal erupted in Turkey, threatening to escalate into a sharp political crisis. Prime Minister R. Erdogan got so involved with the plans to invade Syria that he was ready to make provocation, unheard of cynicism and perfidy, in order to get an excuse for an attack. It was supposed to organize an explosion in the depths of the Syrian territory of the Turkish monument located there stories - the graves of Suleiman Shah - the grandfather of the Ottoman Empire founder Osman I. Evidence for the existence of such plans were audio tapes of a secret meeting of Turkish leaders posted on social networks ... The government did not even try to challenge their authenticity, but only showed extreme dissatisfaction with the appearance of revealing records and makes attempts to limit them online distribution. The opposition has already demanded the resignation of Erdogan. Repulsed by the military, he received a good opportunity to attack the prime minister.

The tomb of Suleiman Shah as an object for the terrorist attack was not chosen by chance. According to the agreement between France and Turkey, the territory of the tomb (area around 1921 hectare) located in the depths of Syrian territory near the village of Karakozak (Karakozak) has the status of a Turkish exclave from 0,8. Above it, the national flags of Turkey are raised, there is a Turkish honor guard numbering up to a platoon of soldiers. 5 August 2013 Mr. Erdogan announced that Turkey will perceive "any attack on the area as an aggression against it" and even against the "zone of responsibility of NATO." According to Erdogan, "everyone knows what the debt tells us in such cases."

And now, apparently, in Ankara it was considered that the time had come not to wait for the pretext anymore, but to create it ourselves. This was spurred on by the increasing military successes of Bashar Assad. According to audio recordings, March 13 with. At the initiative of Turkish Foreign Minister Ahmed Davutoglu, he met with the head of the Foreign Ministry’s secretariat, Feridin Sinirlioglu, deputy head of the General Staff of the Turkish Armed Forces, Yashar Güler, and the head of the Turkish national intelligence, Hakan Fidan. During the conversation, Davutoglu explicitly stated that, in Erdogan’s opinion, the organization of an attack on the tomb of Suleiman Shah would be a “useful opportunity” in the current situation. Fidan, on behalf of intelligence, noted that this would be easy, for example, by means of an explosion. As another “useful” idea, he announced the possibility of sending four of his men to Syria from Turkey, who “would fire at some desert area on the Turkish territory of 8 with rockets” and thus also give rise to an attack. The paradox is that the location of the tomb is controlled by the militants of the Islamic State of Iraq and Syria (IGIS) associated with Al-Qaeda, and it was the fight against them that was proposed to be made the main pretext for the invasion, because “it will support the international community.” The main attack was planned to be launched against the government army, explaining that it allegedly cooperated with IGIS. The “explanation” is ridiculous, but the main thing is to “legally” invade the territory of Syria.

Davutoglu compared the scope of the planned operation with the introduction of troops into Northern Iraq. He also made it clear that US Secretary of State Kerry supported the Turkish intervention, but only asked to find the most plausible excuse for her. So they found - an explosion of their own shrines ... Davutoglu also complained that the Turks did not enter Syria in 2012, "when Damascus was the weakest, almost like Libya." It is noteworthy that of all the participants in the meeting, the representative of the military, Guler, who did not refuse to continue supplying the Syrian rebels, showed the greatest restraint. weapons and ammunition, but indicating that the entry into the territory of Syria of the Turkish army would be tantamount to declaring war on it.

It is also obvious that the offensive of the radical militants in the Syrian province of Lattakia, which began a few days ago from the territory of Turkey with the support of its army, should have served as a prelude to the planned provocation. However, now after the promulgation of the intentions of the Turkish leadership, the completion of the operation becomes difficult. Israeli sources report that at the moment Erdogan insists on continuing to advance in Latakia, while the Chief of General Staff objects to this.

In his public speeches about the appearance of disclosing audio recordings, Erdogan is unable to conceal extreme irritation, shouts about national betrayal and demands to punish those responsible. Exposure journalist Önder Aytaç has been detained. He is accused not of recording information, but of the fact that he was the first to comment on it. The former head of the Turkish Police Intelligence Directorate Ali Fuat Yılmazer (Ali Fuat Yılmazer), who previously led the units that installed the wiretap even in a protected room, and sharply opposed Erdogan, was also arrested. In Turkey, access to YouTube and Twitter is closed to prevent the distribution of audio recordings, but this only aroused interest in them and sparked protests in the community. President Gul 28 March condemned the very appearance of the record as an “espionage act” and took the participants in the scandalous meeting under protection, saying that he “personally asked them to discuss all possible scenarios.” Davutoglu announced the posting of a “cyber attack against the Turkish government” equivalent to a “declaration of war”. That is, not talking about how to provoke a war, but their publicity, it turns out, leads to a military conflict. That is the logic of neo-Ottomanism.

The government is looking for perpetrators of a leak in the ranks of its main opponents - the Hizmet movement F. Gulen and among retired generals and officers. However, many analysts believe that this is beyond their power. Some even allow the intervention of foreign intelligence services, especially Iranian and Syrian. It is not excluded that the Turkish military are behind the publication of the record. It is easy to see that only the non-partisan Deputy Chief of the General Staff Yashar Güler showed hesitation and unwillingness to invade Syria from the participants in the conversation. The army, known for its secular traditions, apparently does not really want to directly intervene in the Syrian conflict on the side of the Islamists. In addition, with the publicity of this record, Erdogan’s numerous enemies in the officer-general’s corps, much of which (about 400 people) he had imprisoned during his reign in prison, including in the high-profile Ergenekon case, a powerful weapon against the prime minister. With such a weapon, it is possible to achieve the displacement of Erdogan on charges of anti-constitutional activities and illegal involvement of the country in the war. This is not about the prestige of the Prime Minister, but about his “head”.

Turkish media write that no matter how the government justifies itself, one thing is obvious: "it was going to involve the country in a war on the basis of fabricated evidence."

The leader of the opposition Republican People’s Party of Turkey, Kemal Kilicdaroglu, stated that these records revealed “a worse scam than Watergate”. Erdogan must resign immediately. The provocation with the tomb of Suleiman Shah and the game of "cat and mouse" with "Al Qaeda" are necessary for Erdogan to start a war with Syria, with the help of which he hopes to solve his own problems connected with accusing him of financial abuses.

The former Turkish ambassador, Deniz Bölükbaşı, draws attention to the "low intellectual level" of the statements of the highest state dignitaries, arguing that "random people in the village tavern would have smarted about these things more intelligently."

The question remains, will Turkey dare to invade Syria against the background of the outbreak of scandal? On a large scale, most likely not. On the whole, it seems that a diversionary strike is planned in the north, while the main one still threatens Damascus from the south, from Jordan. However, for the Syrian command, which has demonstrated a greater depth of strategic thinking than the enemy, this is also not a secret.

No bad luck Syria. At first President M. Mursi, who had broken off diplomatic relations with her, was overthrown in Egypt. Now Erdogan reeled. Who is next? Jordanian King Abdullah II or US President Obama?